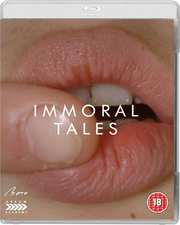 Although it has much in common with Walerian Borowczyk’s earlier work, Immoral Tales marks the point where his reputation as an arty pornographer began, and was sexually explicit enough to have caused problems with the censors on its original UK release.

In common with other surrealists, in particular Bunuel, Borowczyk clearly likes nothing better than to tread across taboos, both religious and sexual and in particular, the hypocrisy that sits behind society’s objections. For Borowczyk, like Burroughs and other outsider artists and authors, nothing is true and everything is permitted. So after being accused of becoming little more than a pornographer with this film and the following (The Beast) Borowczyk kind of became one by releasing films later in his career which made no pretence to be anything but (Emannuelle 5 anybody?). But there is no doubt that ‘Immoral Tales’, whilst featuring ‘strong sexual content’ is much more than just pornography. If that’s important to you.

The second story , ‘Thérése Philosophe’ involves a teenage country girl (Charlotte Alexandra) who mixes sexual desires in her imagination with her dedication to Christ after being locked in her room. Surely an influence on Madonna’s ‘Just like a Prayer’? Certainly delivered with a twist of surrealism that might make you feel better about yourself for watching it.

The third story features Elizabeth Báthory (Paloma Picasso) as a Countess who murders young girls in order to gain eternal youth by bathing in their blood. It’s a re-telling of a poem by surrealist Valentine Penrose. Real pig’s blood was found to be the only thing that worked properly and the sight of congealing blood may disturb some. It sure did me.

The final story involves the daughter of Pope Alexander VI, Lucrezia Borgia (Florence Bellamy), having sex with her male relatives. Which is incest. Which is odd. Which is why it's been included. I think. Let's move on...

A fifth story in the Immoral Tales was originally planned and shot but was taken out of the film which had become too long and then further developed into the notorious feature film La Bête in 1975. However, the full version containing all five tales is included on this disc for the first time – so hold on to the back of your seats and make sure the curtains are fully drawn if you haven’t seen it before.

It’s notable that the film divided critics who felt that Borowczyk was no longer playing the part decreed of him as surrealist genius but rather indulging his own sexual obsessions. For his part, I don’t think he could care less about such labelling. Borowczyk was always driven by Borowczyk – and no one else.

It’s a bit of mixed bag with some of the camera-work looking almost amateurish compared to his previous ‘fixed camera’ pieces.

Once again, this Arrow Academy release is chock full of great extra features.

· The non-L’Age Dor cut – with all five segments as originally intended.

· A Private Collection (1973), presented in the commercially released version and the more explicit ‘Oberhausen’ cut – this look at Victorian erotica and sexual objects caused outrage on release but will not shock a generation used to seeing wart-infested testicles in close up on dinner time repeats of ‘embarrassing bodies’. We’ve come a long way.

Though not for the faint-hearted nor under 18’s, anyone with a relatively open mind will thoroughly enjoy exploring this surreal and sexually explicit collection.