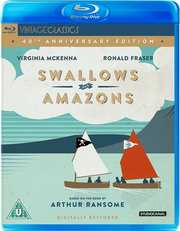 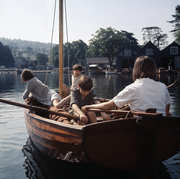 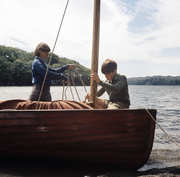 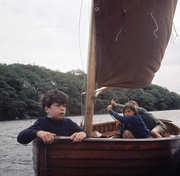 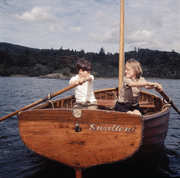 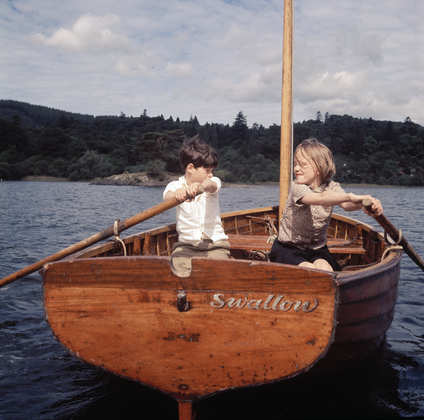 ‘Swallows and Amazons’ was one of those books foisted on me by well-meaning parents, along with ‘Emil and the Detectives’ which I could never really get into despite several attempts. In the late -1960’s I was more interested in Narnia and TV and movie spin-off books (Man from Uncle, Catweazle, Tom Grattan’s War) than this childhood favourite from the 1920’s.

However, the movie version was another matter entirely. The cast were pretty much the same age as me in 1973 (when it was filmed) and I remember enjoying this tremendously when it came out in 1974, 40 years ago. Back then, the idea that four school-kids could take off in a boat for days at a time with no life-jackets seemed perfectly plausible. These days it would be cause for 24 hour rolling news reports.

Although I already have this movie on DVD (as part of a double-pack along with ‘The Railway Children’ and presented in a horribly cropped 4:3 transfer) this lovingly restored upgrade is well worth the money. It’s not perfect but the original picture quality, replete with occasional filmic grain, a slightly gritty ‘look’ often associated with 70’s films, means that it has not been digitally over-worked and it looks pretty much like you’ll remember it – only better. In fact, some of the wide shots of the lakes are truly breath-taking – and finally in the correct aspect ratio! 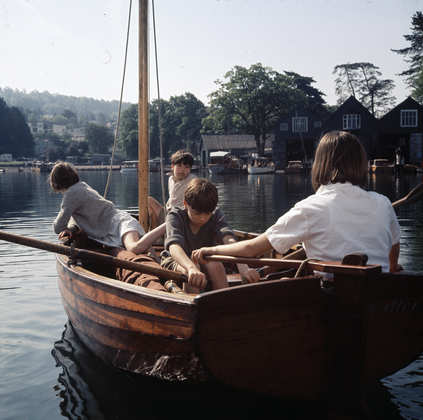 Although the story is arguably dated for children today (no smart-phones or computers anywhere) the choice of period dress, rather than contemporary seventies dress means that the film has endured remarkably well and, along with classics like ‘The Railway Children’, should be an enjoyable 90 minutes for children today.

The film is set in an idealised Lake District in the 1920s, when four children (John, Susan, Roger and Titty – yes, we sniggered at that in the cinema back in the day) go on holiday with their mother (Virginia McKenna). We learn that their Father is on a ‘trip’ but hopes to be back sometime soon. The children find a small sailing boat (The Swallow) and convince their mother to let them set sail for a nearby island where they can set up camp together. When the arrive, they presume the island is deserted and they set up camp there. But they’re not alone. Two sisters (Kit Seymour & Lesley Bennett) are riding the Lakes in a vessel called The Amazon and, whilst flying a pirate skull and crossbones from their mast, declare that they have first claim on the island.

Well, that clearly means war. Drawing out the rules, they agree that they will each try to capture each other’s boats the following day, winner takes all. In other words, a battle between the Swallows and the Amazons. 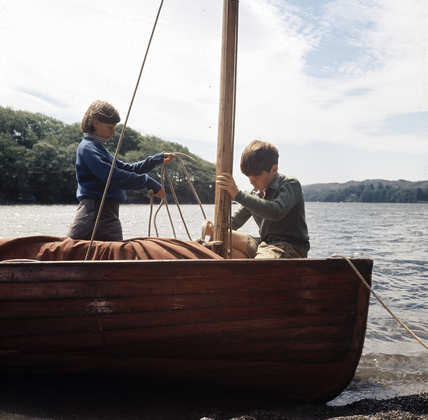 As if that isn’t enough action for one film, the Amazon sister’s uncle (TV and movie stalwart Ronald Frazer) is also on the lake in his house-boat, trying to get some peace and quiet to write a book. Some chance!

In fact, though most of the film’s charm comes from its unhurried pace, a little extra drama is created when local burglars break into to his houseboat to steal a trunk, supposedly full of treasure but which actually contains drafts of his book amongst other things. Although it goes missing, the Swallows and Amazons are soon able to get it back. Despite insinuating that it was the kids who had caused the trouble, he realises his error and decide to make it up them by challenging them to try and capture his boat. When they do, it means walking the plank – something kids will find great fun to watch.

Whilst I had no problem with the children’s acting in the film (much of which was very natural), Frazer’s forced upper crust accent became a bit wearisome when heard through the ears of a cynical adult. It gave the whole film an air of children’s BBC drama – though some would say that that was no bad thing!

But that’s a very minor gripe. Overall it remains an utterly charming film and one that bears unlimited repeat viewings. 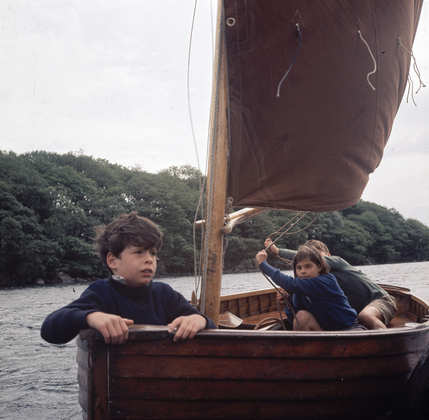 The extra features included on the set are enjoyable too. There are short interviews with Suzanna Hamilton and Virginia McKenna, and a somewhat longer one with Sophie Neville who played Titty, who clearly has nothing but fond memories of the production. With her whole family on set for much of the time, and her Father filming 8mm home movie footage of the proceedings, she has maintained something of a career out of setting up related Facebook sites, appearing as a guest speaker at related functions and so on, all on the strength of the enduring popularity of the film. She remains utterly charming and her warm enthusiasm for the project remains as infectious as ever.

There’s also a nice little locations featurette and I for one scribbled down the details of the B & B which is situated in the holiday house featured in the film, and which was also where Arthur Ransome himself had stayed in the 1920’s which had inspired the book.

Also featured is a collection of ‘behind the scenes’ footage shot by Sophie Neville’s father. Whilst this is very much home movie footage, it remains fascinating and all the more informative for Sophie Neville’s ausio commentary.

Finally, there’s a trailer and a series of production stills.

All in all, a great movie presented beautifully and packaged with a great set of complementary extras. If it sounds like your sort of thing then I wouldn’t hesitate.