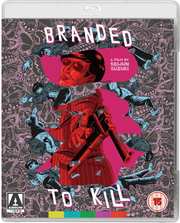 Synopsis:
Seijun Suzuki’s delirious 1967 hit-man film has drawn comparisons with contemporaries Le Samouraï and Point Blank and influenced directors such as John Woo, Jim Jarmusch and Quentin Tarantino among others.

The story of laconic yakuza Hanada, aka ‘No. 3 Killer’, the third rated hit-man in Japan who takes an impossible job from the mysterious, death obsessed Misako. Hanada bungles the hit and finds himself the target of his employers and a bullet ridden journey leads him to face the No. 1 Killer.

Shot in cool monochrome with beguiling visuals, Branded to Kill is an effortlessly cool crime film with a jazzy score that caused Suzuki to be fired by the studio’s executives but is now rightly recognised as his masterpiece.

·Original Trailers for Branded to Kill and Trapped in Lust