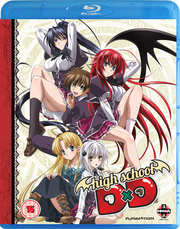 Synopsis:
A war between heaven and hell is raging on Earth - and a hot mess of hormonal fury is raging in Issei's pants. The guy is dying to get some action. Which is funny, since his first date ever turns into a winged monster and tries to kill him. Fortunately, ridiculously curvy redhead Rias comes to his rescue. She's president of The Occult Research Club, a club that doesn't actually research the occult. They ARE the occult - and Rias is a Devil.

Rias takes Issei as a more-than-willing slave and begins training him to use magic in battle against the Fallen Angels, the long-time enemies of Devils everywhere. If Issei can improve his mystical skills, he'll be able to help his hotter-than-hell master and her scorching supernatural schoolgirl friends defeat their foes. Even better, he might end up with a few sexy slaves of his own.