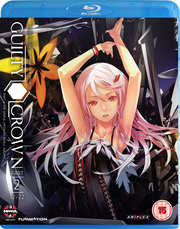 It’s hard to remember now, but there was a time when a series would take well over 12 months to be released. Single disc volumes containing three or four episodes each, released once every two months. The challenge would be to keep the series fresh in the mind, so that when the next volume arrived, you could dive straight in and pick up where you left off. Of course you always had the luxury of watching those first volumes again as a reminder, and back when I started collecting anime, it certainly did happen that I’d have watched volume 1 three or four times over, before I got to volume 6. With all the anime that comes out now, and all the reviews that I have to write, that’s a luxury that I no longer have. But to compensate, these days anime is released in hefty chunks, complete series releases, or half series boxsets, and even then, those are spaced close enough together that you can finish with one boxset, only for the next to have arrived on your doormat in the interim. And then there’s Guilty Crown, which for some annoying reason has had a five month gap between volumes. I can’t remember a thing about this show, except that it was a Code Geass wannabe. I don’t recall the story, couldn’t name any of the characters, and I don’t have the time to go watch Part 1 again to get caught up. I’ll have to dive into this collection of episodes, and hope that I can pick it up again as I go along.

Having a meteorite crash into a country would be bad enough, but the disaster that befell Japan brought with it the Apocalypse Virus, a disease that wrought such havoc that the country became unable to govern itself. That was ten years ago, when the GHQ arrived from outside of the country to run its affairs. This is no benevolent UN organisation though, it’s an occupation force with far-reaching powers to find and eradicate all sources of the Apocalypse Virus no matter where they may appear. It’s not a coincidence that the Apocalypse Virus tends to appear where dissenting groups and those wishing to return power to Japanese hands congregate. This is the Japan that Shu Ouma lives in, although he’s not too invested in the political destiny of his homeland. Far from it, he’s a socially awkward and introverted teen who has trust issues, and difficulties connecting with his classmates. The one positive he does have in his life is that he’s a fan of Inori, an Internet pop-star. But he wishes that he could engage with the world, could actually make a difference. 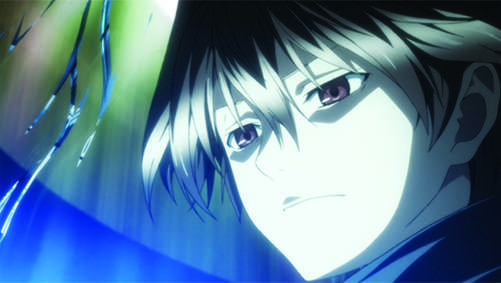 His life changes the day that he actually meets her, although it’s not the kind of situation where you ask for an autograph. Inori is a member of the terrorist group Funeral Parlour, and she’s just stolen the Void Genom from GHQ. Injured, and fleeing from GHQ forces, she asks Shu to get it to Gai, the leader of Funeral Parlour. Circumstances lead it to activate instead, and suddenly Shu has special powers awakened from his DNA. The Void Genom allows him to access the Voids in other people, the true nature of their hearts, and these are made manifest in the form of weapons that he can wield. The Void that he pulls from Inori manifests as a powerful blade. It’s a power that wasn’t meant for him, but he’s got it regardless, and Gai needs that power to free Japan from the yoke of the GHQ. It’s time for Shu to engage with the world, to make a difference, but he quickly finds that it’s not all that it’s cracked up to be.

The concluding eleven episodes of Guilty Crown are presented across two Blu-rays from Manga Entertainment, along with some extra features. And as one arc of the story ends at the start of this collection, another begins. 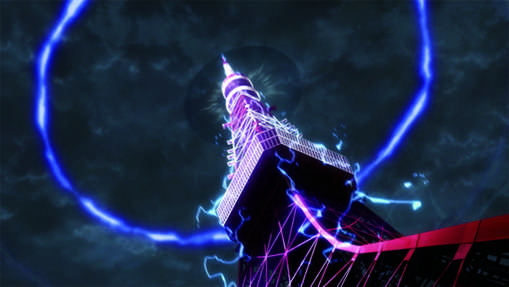 Guilty Crown gets a 1.78:1 widescreen transfer at the 1080p resolution. It’s a pretty fair transfer, with the animation coming across with clarity and smoothness. The colour rendition is as rich as you would expect from Blu-ray, and there is only a minimum of banding during scene fade-ins and outs. What strikes me is that the show never seems to make use of the full resolution of HD, appearing soft, and lacking in the pin sharp pop of other HD anime titles. The contrast becomes most apparent during the credit sequences, where the text is suddenly pin-sharp, and for the eye-catch image. Even shows up-scaled from lower resolutions such as Fullmetal Alchemist Brotherhood look more impressive on Blu-ray. That said, this is still a step up from DVD visually speaking.

It’s a shame, as Guilty Crown is a beautifully animated show, with impressive, memorable character designs, and a rich and well thought out world design, depicting a near future that is bright and shiny, yet recognisably in ‘our’ world. The action scenes are brilliantly rendered, and the 3D CG elements and 2D animation meshes seamlessly. The mecha designs too are impressive and stylish, making this a show with a very pleasing visual aesthetic.

The images used in this review are sourced from the PR and are not representative of the final retail release.

You have the options of Dolby TrueHD 5.1 Surround English and 2.0 Stereo Japanese, and this is one of those titles where the English subtitles are locked to the Japanese audio, and the signs track is locked to the English track. I went with the Japanese audio as always, and the stereo does enough to convey the action, especially when prologicked up. The cast is suited well to their characters, but the real spark of this show comes in its music, which goes above and beyond the usual action anime soundtrack. This is in part to one of its main characters being a pop star, but generally the music to the show, both songs and incidental really does stand out. I gave the dub a try, and it felt like an identikit Funimation dub, with character archetypes getting the same voices over again. The surround does give the action a boost though. The subtitles were accurately timed and free of typographical error. 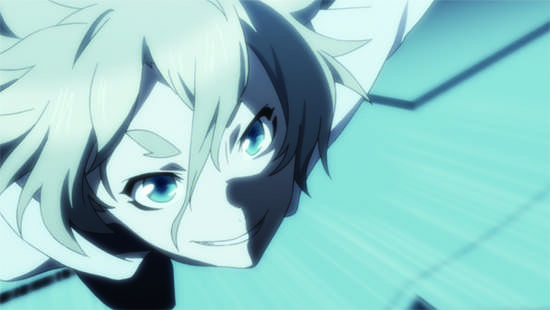 The discs get an animated menu screen with which they present their content.

It’s the same all over again for the commentary on episode 19; all that changes are the identities of the actors, Martha Harms (Haruka), Caitlin Glass (Arisa), and Corey Cleary-Stoner (Souta).

Disc 2 offers you the Episode Previews for episodes 12-21, 5:20 worth. You also get some more of the Guilty Crown 4-Panel Theatre, six bits 8:39 in total length.

The biggest extra here is the Reassortment (Series Digest), which summarises the first arc of the story into a runtime of 47:33. This is presented in Japanese with English subtitles only.

You also get the textless opening, two textless closings, and the U.S. Trailer.

At the end of episode 22, my feelings about this series were such that I only checked the extras on disc 2 to see that they worked, and had no interest in watching them through. 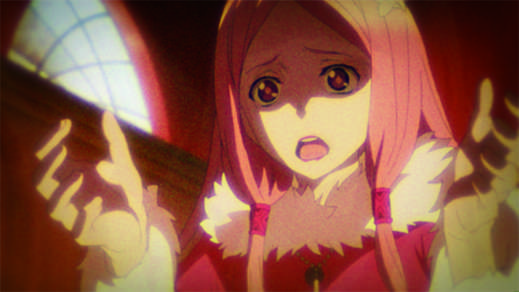 In a perfect world, Part 1 of Guilty Crown would contain episodes 1-12, and Part 2 would contain 13-22, and you could then buy part 1, and never have to bother with part 2. Alas, the series wound up split evenly down the middle when it came to release, which means that to see the concluding episode of the first arc, you have to buy the second collection too. Because the second arc of Guilty Crown is pants. It’s seriously pants. It’s M.C. Hammer pants. That’s how pants it is. I was pretty non-committal about Part 1, its Code Geass-lite stylings seemed somewhat redundant in the face of the real McCoy, but it did present a story that managed to entertain and excite despite that. If it had continued in that vein, I would be perfectly happy to count Guilty Crown as a watchable, if non-essential show.

That somewhat derivative storyline concludes in episode 12, but what follows from episode 13 to the end, takes what little goodwill the series had engendered and flushes it completely down the toilet. From this point on, the story builds on reversal and character assassination. It’s about exploring the darker side of these characters, creating a Lord of the Flies situation, with a bunch of school students stuck behind ‘enemy lines’, and having to govern themselves, and consequently turning out to be utter bastards to each other. Heroes become tyrants, previously virginal and impeccable girls become manipulative sluts, and every once in a while, someone will pull out a gun and shoot someone, in what is supposedly a shocking cliff-hanger, but by the sixth time becomes old hat. All of the characters that you might have liked in the first arc, might have invested in, turn out to be scum of the worst order, and any investment you might have had in the show is rapidly lost. 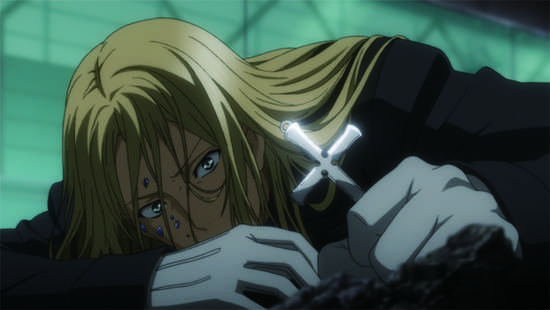 Don’t get me wrong. There’s nothing technically wrong with these episodes. Other than the creative choices made in this final arc, the writing is structurally sound, there aren’t any gaping plot holes, the animation is just as good as before, the production values shine, the music is excellent, and if by any chance you can engage with the second arc of the show, it will probably work as a piece of entertainment. I suppose you must give the creators kudos for being so willing to alienate a show’s viewers to remain true to the original intent of the show. But the bottom line is that if you do alienate the viewers, they will stop watching. I had to watch the show for the purposes of the review, but by episode 15, it was always with a sinking feeling, as I wondered in just what spectacular way the creators would choose to further torpedo their own story in the next episode.

And then there is the ending, where they decide to do Third Impact again, their own version of Evangelion, utterly pretentious (complete with opera and ballet), and ending on a cake and eat it note that is probably the most unsatisfying moment of a show already vacant of satisfaction. Part 1 of Guilty Crown was good, and you’re going to need Part 2 to conclude that storyline. That’s done in the first episode in this collection. I doubt that the second arc will see much play, which makes this probably the most expensive single episode of anime ever released in the UK.