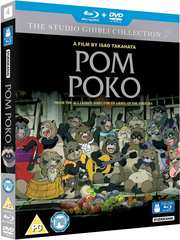 It’s been eight years since I last watched Pom Poko. Back then it was for the review of the Optimum DVD release of the Isao Takahata film. That was when Optimum were first bringing out the Ghibli collection on DVD in the UK, giving it the comprehensive curation that it deserved, rather than the pick and choose piecemeal approach that Disney had previously given it. Since then Optimum have become Studiocanal, and this time it’s Studiocanal who are giving the Ghibli collection their full attention, this time on Blu-ray. Eight years is a long time, long enough for me to put a film out of my mind and come to it fresh again, as if I were discovering it anew. I made up my mind to give Pom Poko a fresh new review, see whether eight years had changed me enough as a person to find something new to appreciate about the film, see it in a wholly different way. Oddly enough, I had the exact same reaction I did the last time I watched it, so much so that I might succumb to temptation and engage in a little cut and paste from that original review.

Pom Poko is one of those eco-messages wrapped up in animation that comes along from time to time. A lot of Miyazaki’s work contains observations about humanity and how it interacts with the environment, but Pom Poko is much more straightforward, with the raccoons living on the verges of Tokyo finding their habitat vanishing as humans expand. These aren’t the raccoons of North America mind, but I suppose that ‘Tanuki’ is much more accessible translated as ‘raccoon’, and the meaning comes across pretty clearly. However, these raccoons appear more like the result of a collision between a fox, badger and bear.

With their territory shrinking, the raccoons turn on each other to fight for the dwindling forest. It’s during this battle that we learn the odd fact that when out of sight of humans, raccoons walk on two legs like people. It takes the matriarch Oroku to make them see sense, that it is the humans tearing down their forest that are the enemy, not each other. The elder raccoons call a meeting, where it is decided to fight back against the humans, using the lost art of shape-shifting. Raccoons are like foxes and some cats in that respect, able to alter their appearance at will, as long as they have the energy to do so. Not everyone is agreed as to how to fight back, the aggressive Gonta is all for killing as many humans as possible, while the gentler Shokichi would be happy with just driving them away. But with every victory comes a setback, and more and more of their home in Tama Hills becomes part of the Tokyo suburbs. 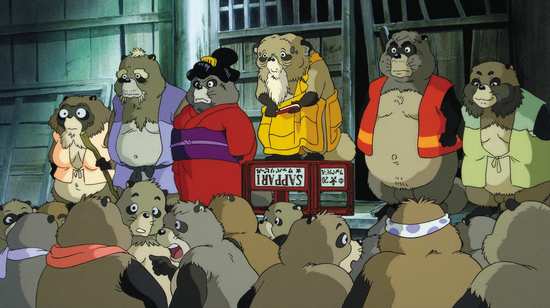 Pom Poko gets a 1.85:1 widescreen transfer at 1080p resolution. Once again, Studiocanal do the Ghibli films justice with their treatment. The image is clear and sharp throughout, bringing across the animation with exquisite detail, presenting this vintage tale of tanuki and their fantastic transformations and supernatural powers to glorious life. Pom Poko’s colour palette is a little reserved and autumnal in feel, even though the story takes place over several years, and while the characters are certainly bold and bright, there’s a watercolour feel to the backgrounds that maintains the ethereal sense to the story. This Blu-ray transfer looks to be sourced from Australia’s Madman Entertainment, and there will probably be some eyebrows raised again at DNR. Once again it has been lightly applied to the film, and while it does retain film grain, it is certainly more subdued than that in the trailers for Pom Poko on this disc.

You have the choice between PCM 2.0 Stereo English and Japanese, with optional translated English subtitles to accompany the Japanese track (you can toggle them on and off with your remote, even though there’s no menu option). If I recall, the DVD had a signs only track and HOH subtitles to go with the English audio, but that is absent from the Blu-ray. The dialogue is clear throughout, and the music comes across well. The stereo offers the film a bit of space to play with the action, and affords it some ambience, but it’s hardly the most sound-designed film. The subtitles are free of typographical error and are accurately timed, while Pom Poko also gets the sort of quality English dub that really only the Ghibli films get, although the English dub does sanitise ‘testicles’ to ‘raccoon pouches’ to protect the sensibilities of the youngest viewers, or rather the sensibilities of Daily Mail readers who will get offended on behalf of children at the drop of a hat.

As with most of the Ghibli Blu-rays, Pom Poko comes with the film on DVD as well, although I haven’t seen this disc to compare it to the original Optimum release. However, other than the animated menu, the Pom Poko Blu-ray is identical in content to the DVD.

You get 7½ minutes worth of trailers for Pom Poko presented in HD.

You get other Ghibli trailers presented in 720p, including My Neighbour Totoro, Ponyo, Howl’s Moving Castle, Nausicaa of the Valley of the Winds, Arriety, and Porco Rosso. 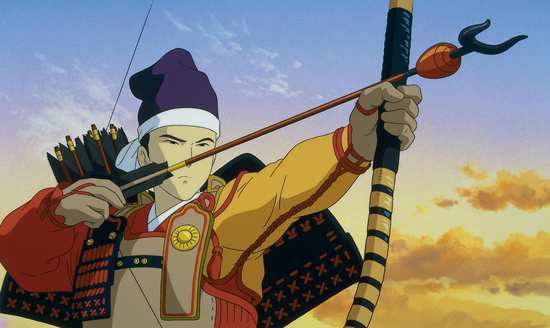 I had exactly the same experience watching this film on Blu-ray as when I watched it on DVD, even though I had long forgotten what the film was about. I had that eager anticipation that I always have at watching a Ghibli movie, as if for the first time. There was that initial delight at the fantastic animation, and the appealing characters, but then as the film progressed, there was the realisation that I wasn’t exactly being enthralled in the way that I normally am with Studio Ghibli output. My attention began to wander, I began looking at the clock and in the final ignominy, I fell asleep halfway through the film, only coming out of my stupor for the last twenty-five minutes. I then went back and watched what I missed, this time in English to get a flavour of the dub. And then I remembered that I had to do the exact same thing when I reviewed the DVD. I had actually fallen asleep at the same point in the movie again. It isn’t just the inevitable onslaught of age!

Pom Poko doesn’t really impress as a film. It’s overlong for one thing, coming in at a smidgen under two hours. Much of that is taken up with the cat and mouse between the raccoons and the humans, and coupled with the fact that the story is told in retrospective narration; it invites glances at the watch. The piecemeal nature of the story makes it feel very much like a series of sketches rather than a single narrative. It’s also a story where the comedy threatens to overwhelm the message. Some of the events should be quite tragic, not everyone makes it to the end credits in one piece, yet I never really got to know any of the characters to sufficiently care. Also, there is none of the sense of wonder, the magic associated with other Ghibli titles; this is far too goofball for that. That said, there is some intelligence to the story, and the raccoon society is very much a reflection of our own, in the way they behave, the way they live and the way they relate to the world. 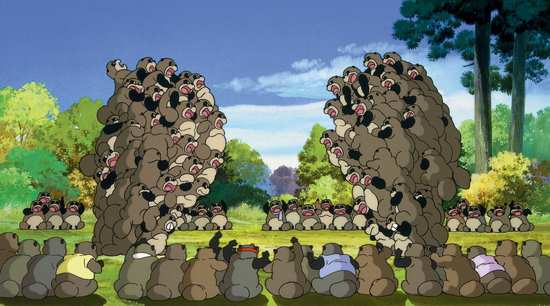 Ultimately, this topic has been covered in animation many times before, in films like Watership Down and Ferngully, The Last Rainforest, and shows like The Animals of Farthing Wood, with greater seriousness and to better effect. These raccoons certainly supply plenty of comedy with their shenanigans, but it’s done to such a degree that the message actually has to be explicitly stated at the end of the film, rather than left implicit in the story.

I realised this time that the problem is the narration. Pom Poko is a film that is narrated from beginning to end, and it feels like I’m being told a story rather than watching a film. For narration to work in a film, to drive the pace and entertain, it has to be witty, funny, and exciting. The narration in Pom Poko is just a matter of fact retelling, simply adding exposition to the events that happen on screen, and it’s this that kept me as a viewer separated from the characters, and unable to invest in the story. Pom Poko may be another quality Blu-ray release from Studiocanal, with excellent video and audio quality, but it is one of the lesser Ghibli movies, and even less enjoyable the second time around.