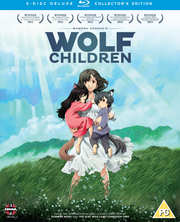 There’s something to be said for leaving the best till last, and with their final release of 2013, Manga Entertainment are giving us something very special indeed, in the form of Mamoru Hosoda’s Wolf Children. Mamoru Hosoda makes movies, which is an obvious statement to make. But actual anime movies, especially mainstream movies are a rare thing. You certainly get the series spin off features which require familiarity with a long running franchise, you get the recap movies which are a quick way for studios to cash in, and you get the odd film from the auteur like Mamoru Oshii, or Makoto Shinkai, which may play to niche audiences, appeal to critics, but rarely grab the mainstream. To actually go into a cinema, spend your money, and watch a two hour animated feature with no connection to any television series, and just have a good time watching it without necessarily having your intellect challenged, has previously been the indication of a Studio Ghibli movie. It’s the kind of film that Miyazaki makes look effortless, yet few others can emulate. 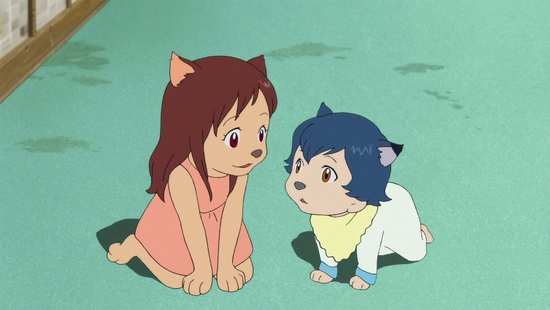 In recent years, another name has appeared making mainstream anime feature films that appeal to the broadest audiences and have the critics raving too. But Mamoru Hosoda’s films aren’t just Ghibli clones, in my opinion they are better. The Girl Who Leapt Through Time is a stunning sci-fi love story that simply blew me away when I first saw it. It took a classic bit of Japanese sci-fi and reinvigorated it for the 21st Century, and to this day it’s one of my favourite films. He then created Summer Wars, again a bit of sci-fi that looked at family, and the way people communicate in the modern world, which still managed to enchant and enthral. With Wolf Children, he creates a modern day fantasy, a 21st Century fairy tale that again takes a look at family, and in this particular case, the subject of parenthood. 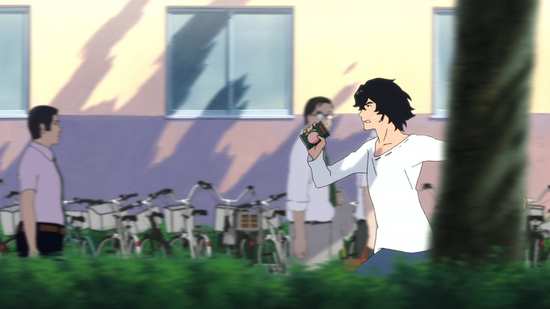 You can’t predict who you fall in love with, and Hana couldn’t have predicted that the enigmatic student sitting next to her in lectures at her university was actually a wolf-man, last descendant of the wolf, now extinct in Japan. By the time she did find out, it was already too late, they were in love, and soon a daughter, Yuki, and a son, Ame followed. But the wolf-man died, leaving Hana to raise two children on her own. She has little preparation for being a parent, but no preparation at all for raising children who can change between human and wolf at whim. The city’s no place to raise such a family, so Hana decides to move to the country, far away from civilisation, where her children can grow up in peace and learn about who they truly are. But living in virtual isolation brings its own problems, and as Yuki and Ame grow up, they’ll have to face some unique choices.

Wolf Children is released on DVD and Blu-ray DVD combi pack. I’m looking at solely the Blu-ray disc for this review. 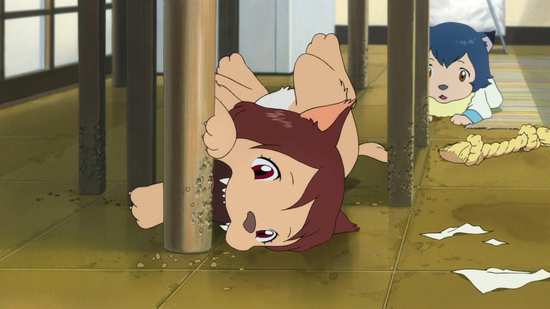 Wolf Children is presented at 1.78:1 widescreen 1080p on this Blu-ray and I watched about ten minutes of the disc to see if there were any nits to pick in the transfer, and I couldn’t find any signs of compression or digital banding. It’s a clean, pristine Blu-ray transfer of a recent film, and it looks gorgeous. For the remaining hour and fifty minutes, I was too enthralled with the movie to care about the disc. Mamoru Hosoda once more creates a piece of animated visual magic. The character designs remain simple but effective to allow for detailed and fluid movement, while the richness and detail in the backgrounds varies from the beautifully impressionistic, to the odd moment of photorealism. This is also a film where everything is animated, not just the main characters in focus at any one point. It would have been completely impossible to do with cel and paint, and even with modern computer animation it must have been prohibitively time consuming and labour intensive. The end results speak for themselves though. 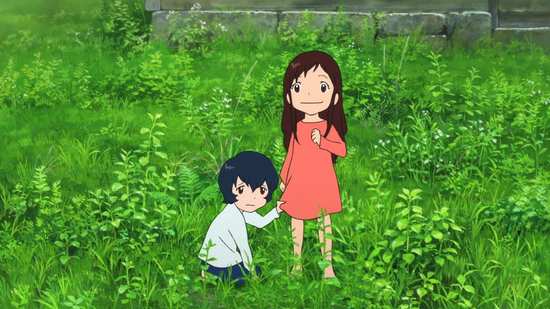 You have the choice of Dolby TrueHD 5.1 Surround English and Japanese, with optional translated subtitles and a signs only track. I was very happy with the original language audio for this release, and the dialogue was clear throughout, the gentle music soundtrack came across well, and the surrounds were put to good use bringing across the film’s subtle ambience and nuanced sound design. The subtitles were free of typographical error and were accurately timed. I gave the dub a try, and it is a strong effort from Funimation, of high quality and suited to the film. It’s just that I had that perennial problem with infant voices in the English dub that sounded too old for the characters. In the Japanese version, they cast children who were not too old and could easily pass for three or four in terms of their voices. 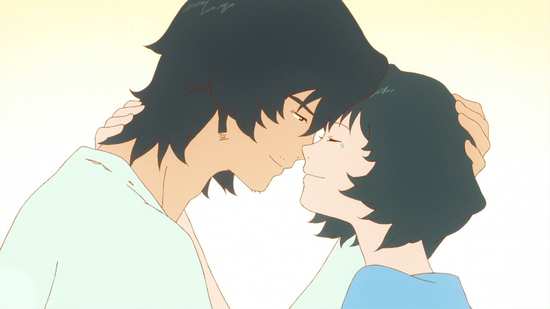 Wolf Children presents its contents with an animated menu, and it doesn’t shy from providing extra content.

The film gets an audio commentary, and following the precedent set for movies released by Funimation, ADR Director Mike McFarland treats it as a set of interviews, as he invites the English voice cast and some of the staff behind the dub into the booth one at a time to chat about the film, and their roles in creating the dub.

Then there are the Stage Greetings, which sees the director and various cast members greeting the audiences at various Wolf Children Events. 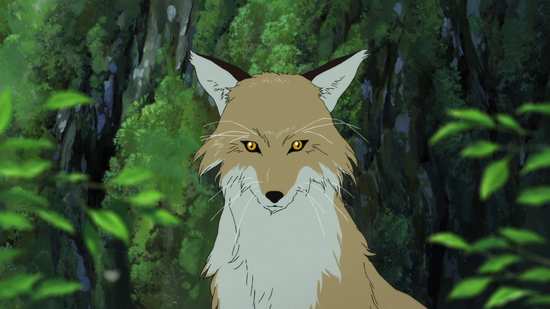 The Promotional Video (16:10) is a brief interview with director Mamoru Hosoda, followed by an extended preview of the film.

The US Trailer comes from Funimation, and it is presented in 1080p resolution. 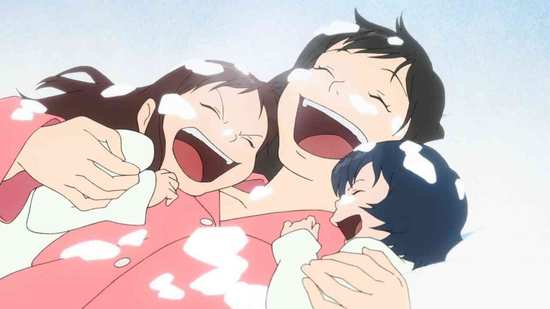 I’m getting to this review a little late. As I start gathering my thoughts, Wolf Children has already received rave reviews from not only other anime websites, but the mainstream press as well, with the broadsheets and the tabloids giving it the kind of plaudits that haven’t been applied to an anime since Spirited Away last won an Oscar. People are already lamenting that Funimation had the temerity not to be able to afford the kind of multi-million dollar PR push that a film needs to get noticed as an Oscar nomination, as Wolf Children is perhaps the standout animated film in a year of fizzling entries. It’s already being decried as a crime that Wolf Children has not been nominated. With that kind of critical acclaim already accumulating around this film, there’s little more that I can add to it other than I love this film. 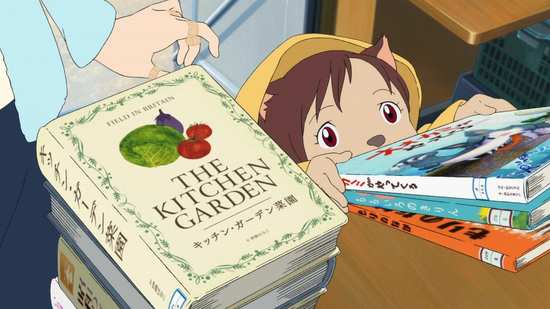 This is Mamoru Hosoda’s ode to motherhood and mothers the world over, encapsulated in the character of Hana, who is left having to raise two rather unique children by herself following the loss of their father. It crosses a gentle family drama with a modern day fairy tale, and results in something that is heart-warming and uplifting, as well as magical and enchanting. Told from the point of view of the daughter Yuki, the story covers some fifteen years of time, from her parents’ first meeting, to the births of her and her brother, the loss of their father, their difficult early years in the city, and then moving to the country to be away from prying eyes, all the way up to the children’s early adolescence. For the characters of Yuki and Ame, it’s a coming of age story as well. 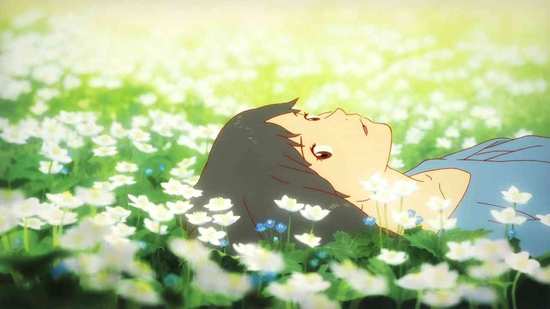 Without the wolf aspect to the story, it could just very well be a gentle and uplifting drama about a young single mother, suddenly having to raise children alone, and out of her depth, having to undergo on the job training. No children are easy to raise, but she gets two very needy characters to take care of. Yuki is the boisterous, inquisitive trouble-seeker, while Ame is born sickly, and becomes somewhat introverted, timid and clingy as a result. Having to handhold Ame while simultaneously preventing Yuki from getting into accidents at first is almost more than Hana can handle, and there are plenty of light and comic moments that new parents will recognise. 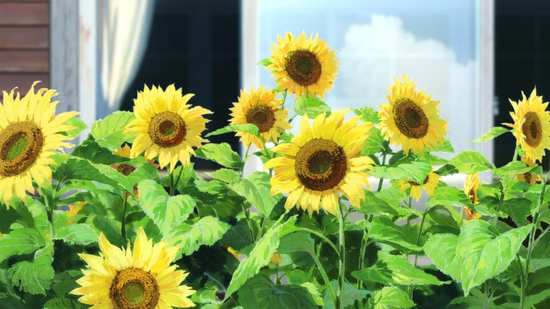 That these children happen to be part wolf, and can chop and change between wolf and human at the drop of a hat infuses the film with a whole lot of magic, and introduces a very engaging visual element, as well as adding even more comedy. Seeing Hana with an unwell Ame in her arms, torn between taking him to a doctor and a vet is one of the more memorable moments in the film. But while the city may have been the perfect place for their father to hide in plain sight, the same can’t be said for two children who have yet to find their identities as people, or understand the world in which they live. They wind up moving to the country where they can live far from prying eyes, and where Hana can let Yuki and Ame grow up in relative safety, letting them find out about who they are, and who they want to be for themselves. 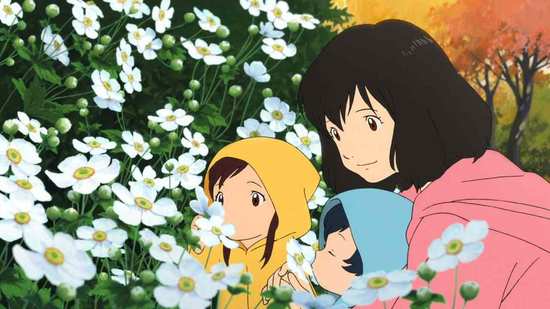 This adds another aspect to the love affair this film is engendering, in the beauty and simplicity of country living, far away from technology and mass communications, in breathtaking surroundings. It also reinforces a sense of community, with the realisation that no one can truly live alone, no matter how much they may want to. Hana wants to raise the children in isolation, with the plan of growing their own food, but raising crops isn’t that easy, especially for a beginner. On the other hand her new neighbours are suspicious of her at first, as they’ve seen city folk come, fall in love with the pretty country, try actually living there, and then give up and go home. But when they see Hana actually persist and persevere in her efforts, they come together to make her and her children part of their community. 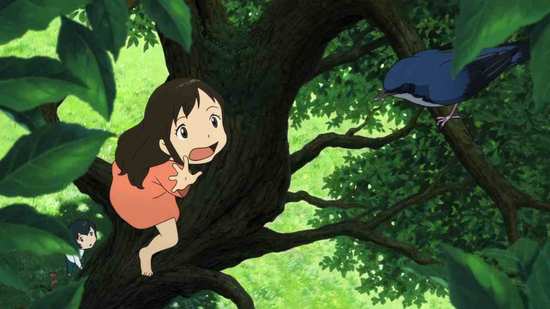 Of course there always comes a point where the apron strings have to be cut, where a child’s identity is established, and they start making decisions for themselves, and it’s usually at this point that mothers are most reluctant to let them go. With Yuki and Ame it really is a fundamental decision, a moment of where they realise who they are, and who they want to be, which given that they are wolf children is a more visually and emotionally significant choice. 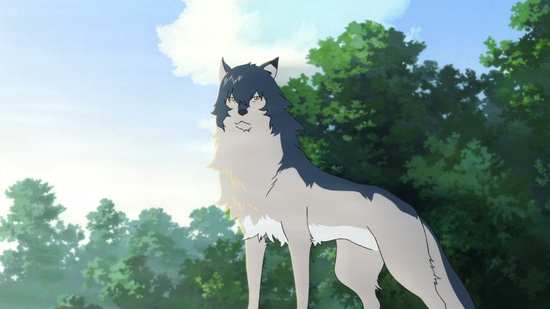 Mamoru Hosoda has made another arresting film, an emotional journey that lasts some fifteen years, somehow perfectly condensed into two hours. It’s easy to make schmaltz, and it’s easy to manipulate emotions, but Hosoda somehow manages to elicit tears, joy and wonder through simple strength of good storytelling. That is an accomplishment an order of magnitude more impressive. It really is a movie about Hana, Yuki and Ame, and it tells those stories without flaw or issue. If I do feel a tad frustrated, it’s that country community storyline that is developed in the second act doesn’t play out into the third. Of course by that point, the message of that particular storyline has been made clear, and any more would be redundant, but it’s just that the neighbour characters, particularly Nirasaki, are so colourful and entertaining, that it would have been nice to see more of them. That is a small nit to pick in an otherwise flawless film. Manga Entertainment end 2013 on a high and it makes you feel warm, fuzzy and anticipative of what gems they will bring us in 2014.