Sword Of The Stranger
Blu-Ray

Sword of the Stranger. Special Edition
Not available

Sword Of The Stranger [DVD]
Beez

New: £48.04
Sword of the Stranger/Ninja Scroll - Anime Box 2
Not available

Sword of the Stranger 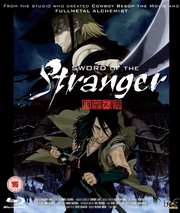 Synopsis:
What qualifies a man as good or evil? Is it the amount of political power one attains, the quality of his swordsmanship, or how well he serves his lord? With the fall of the second shogunate Japan has sunk into a state of disarray historians now call the Sengoku period, or the era of Warring States. Civil wars rage on throughout the many feudal holdings, where a man may raise his station in life simply by killing his superior.

Whilst wandering this war-torn countryside a nameless ronin stumbles upon a young boy by the name of Kotaro, his dog, and the many Chinese assassins dispatched to claim the boy in some strange ritual for immortality. Seeing something of his own past within the child, the nameless swordsman chooses to act as his bodyguard, but can he truly keep Kotaro from the clutches of the Ming and their bloodthirsty blonde mercenary, Luo-Lang?