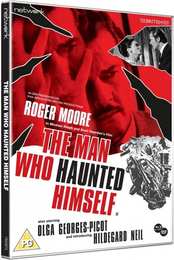 The Man Who Haunted Himself (Blu-ray Details)

DVD
Voyage To The Bottom Of The Sea: Series 4

DVD
Voyage To The Bottom Of The Sea: The Complete Series 1 (9 Discs)

DVD
Land Of The Giants: The Complete Series 1

DVD
Pathfinders in Space Trilogy (The)

Review for The Man Who Haunted Himself


When Network do Blu-Ray editions they are generally of an exceptionally high quality and this is the no exception. It’s a pristine transfer with wonderful detail and colour.

Featuring Roger Moore post-Saint and prior to his turns in The Persuaders and James Bond, this is a highly entertaining and terribly British treat.

Directed and produced (and screen-played) by Basil Dearden (with un-credited support from Bryan Forbes) ‘The Man Who Haunted Himself’ was to be his final film and to a large degree it can be seen as a last gasp of a particular era too. It has an old fashioned air to it (City gents, gentlemen’s clubs, jaguar cars, bowler hats) and yet there seems to be something new and contemporary bristling at the edges making its presence felt – which is, of course, the intent.

Roger Moore is surprisingly well cast as Mr. Pelham, a young but very successful Director of a City firm. He’s known to be highly conservative, very punctual, a doting husband and a good friend to those he visits at his gentlemen’s club. Yet one day, on his way home (via the embankment and the Westway) he seems to suddenly be under the control of a devlish force encouraging him to drive like a maniac and imagining that he is at the wheel of a high performance car. He loses control and drives into the central reservation of the motorway.

This then is how ‘The Man who Haunted Himself’ begins and it’s terribly well done, revealing the sight sand sounds of late sixties London and using some frighteningly skillful stunt driving to great effect.

Lifted from the wreckage we cut to see Pelham on an operating table where at one point his heart stops. Using resuscitation, the Doctor manages to get his heart pumping again though curiously for some small time the equipment registers not one heat-beat but two – in perfect synchronisation.

We are then taken through aspects of Pelham’s everyday life where it seems that everyone has a comment on something he has supposedly said or done or places that he has been seen – which mean nothing to Pelham. At first he brushes them off but soon he begins to suspect that he has a doppelganger deliberately imitating him. Indeed, on one occasion he appears at a table at his club where his friend (Anton Rogers) suggests he has just been sitting. Sure enough, there’s his cigarette in the ashtray and his half-finished drink .

Then there’s the girl who he saw taking photos at the swimming pool who claims to have been his lover. The film does this all brilliantly and we, as the audience, are never clear whether Pelham is the victim of some conspiracy or if he’s losing his marbles. Or is it something more sinister than that? After all, who is it sitting in the sports car outside his house?

The film does well to extend this conceit (after all, the original story was only a short and was originally adapted for TV as an ‘Alfred Hitchcock Presents’ episode in 1955) but it does start to tire about 60 minutes or so in. The end (not to be revealed here) is arguably a bit of a let-down after such a long lead up but this is a small gripe really. It’s remains, for the most part, an exceptional film.

The score (Michael J Lewis) is generally fantastic and the repetitive theme (supposedly a favourite track of Pelham’s on a light classical album) utterly bewitching.

I bought the previously issued release after a friend lent it to me about a decade ago and there is no doubt that Network have done an incredible job in making this new transfer look exceptional when compared to that. So well worth a double-dip if you are a fan of the film. You’ve certainly never had it so good! In fact, if you saw the Retro Action Blu-Ray re-masters of some of the ITC back catalogue then you’ll know what to expect. Taken from the original film negatives and re-mastered at its OAR of 1.75:1, pretty close to 1.85:1 (16:9). Rich, vivid colours betray the quality of the cinematography with fantastic detail being brought out through High Definition. Lovely.

I received just the Blu-Ray but the retailed pack comes with dual-format so I can’t comment on the DVD or all of the extras (like PDF publicity material). However, there is a commentary track on the Blu-Ray featuring Roger Moore and Bryan Forbes which seemed familiar to me so is maybe a repeat of an extra included on a previously issued edition of the DVD. All good fun and relatively informative with Moore on good form. There are also some gallery materials, and a really enjoyable 40 minute music suite which highlights just how good the score is.

All in all, a very welcome release and a top notch transfer.