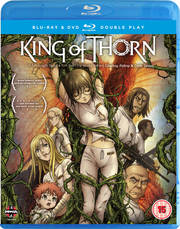 Can you believe how long I have been waiting to see the King of Thorn movie? Manga Entertainment announced they had licensed this back at the start of 2011, and it’s taken over two years to get from announcement to actual release! In fact, I have been waiting even longer than that to get a further fix of King of Thorn. My local library got the first volume of the King of Thorn manga, and I read it way back in 2008, captivated by its post-apocalyptic sci-fi vibe, as it set up quite the compelling story. I waited in vain for the library to get further volumes, and it’s only now that the film is finally released that I get to see the rest of the King of Thorn story. Typically, it turns out that the movie diverges from the manga. After all this time, and especially all this anticipation, will the King of Thorn movie be worth it? 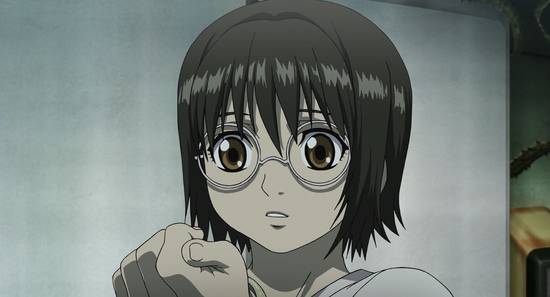 King of Thorn is released as a Blu-ray / DVD combo collection. I only got the Blu-ray to review, and can’t comment on the DVD component, or indeed the packaging.

At the end of 2012, a new disease began to appear. Dubbed the Medousa Plague, its symptoms were catastrophic and always fatal. The victims turned to stone. The infection rate high, and the probability of fatality at 100%, it wasn’t long before the world began to fall apart. Then the Venus Gate biotech company offered a lifeline. They would build a cold sleep centre in a Scottish castle, where 160 people chosen by lottery would be placed in cryogenic suspension, in hope for the day that they could be awoken after a cure had been developed. In 2015, the centre was ready to serve as an ark against this bioterror flood, and the chosen few entered hibernation, among them Kasumi Ishiki, who would have to leave her twin sister Shizuku behind. 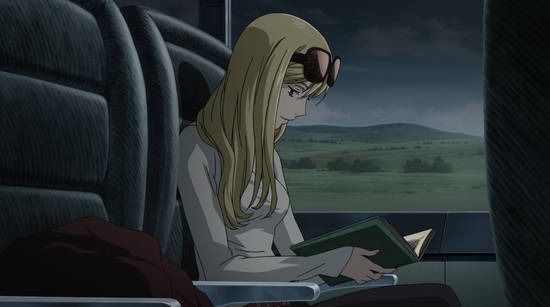 But when the cold sleep capsules open, they wake to find not a cure, but an unexplainable disaster. The castle has been inundated with giant, thorny vines, and strange creatures now prowl the otherwise uninhabited castle. What’s worse is that these creatures have a taste for human flesh. The few surviving cryonauts escape to find only worse horrors waiting for them in the castle. Just how much time has passed since they were put to sleep? What happened to all the people? Just where did these monsters come from? Kasumi and six others have to stay alive long enough to find out, but not everyone is who they appear to be. 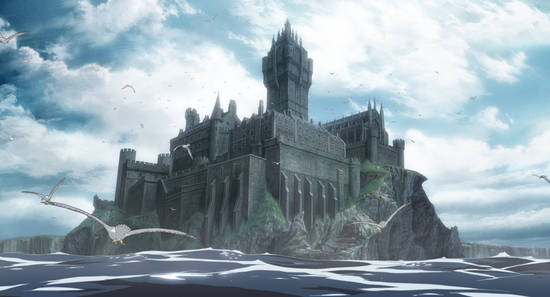 King of Thorn gets a 1.85:1 widescreen transfer at 1080p, and I have to say that it is an exceptionally good one, with excellent detail, brilliant recreation of the film’s moody colour palette, and no sign, to my eyes at any rate, of compression, aliasing, or the perennial anime bugbear of digital banding. It looks like a pristine transfer that makes fine use of the high definition format. The actual nits to be picked will come with the animation itself. King of Thorn has a combination of styles to it, traditional 2D animation for close up shots and sedate character moments, along with 3D cel-shaded anime style visuals for the action scenes and more frenetic sequences. In this respect it takes a leaf from shows like Freedom and the Appleseed movies. Usually this works a treat, and the action scenes in King of Thorn are accomplished with an energy that traditional anime style doesn’t allow. The problem comes where the 2D and 3D mesh. Sometimes scenes which would have been better animated as 2D are instead given the 3D treatment, and in mid-range and especially close up, you can see the lack of expressiveness in the character’s faces.

The images in this review are sourced from the PR, and aren’t necessarily representative of the final retail release. 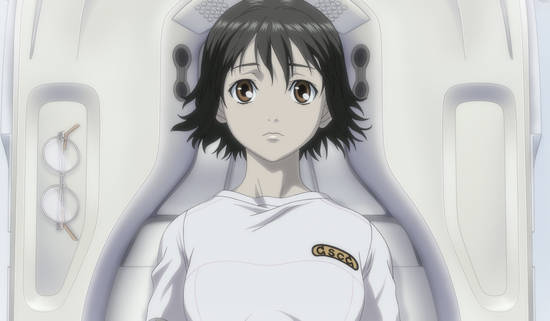 King of Thorn gets Dolby True HD 5.1 audio in English and Japanese, with optional subtitles and a signs only track. Usefully, none of the audio or subtitle options are locked on this disc. I went with the Japanese audio and was very happy with the experience, the surrounds doing justice to the film’s action sequences, and establishing suitable ambience and mood for the story locations. The film’s music was forgettable, but obviously worked well enough to drive the action along. I gave the dub a spin and well... King of Thorn is a film with a cosmopolitan cast, and that is reflected in the dub that Funimation give it. There are some dodgy accents here to bear with, unless Dick Van Dykia is an actual country! 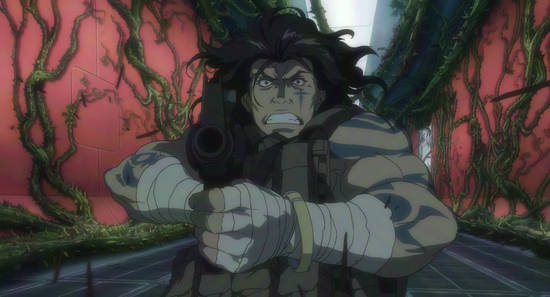 King of Thorn comes with some nice extras, and are presented in HD on this Blu-ray disc, which has a simple menu screen against clips from the film (given a little bleach bypass treatment). Incidentally this disc appears to have been authored by Australia’s Madman Entertainment.

The Talk Event at Cinema Sunshine Ikebukuro lasts 29 minutes, and has the film’s producer and the director on stage after a viewing of the film to engage in a little Q & A with the audience.

The Director Interview lasts 11½ minutes, and sees the director face to face with an anime critic. This is a good chat and goes into some of the symbolism and deeper meaning in the film, as well as some of the differences from the manga.

You get the Pilot Film which last 2 minutes, and is part trailer for the movie, and part proof of concept. There are some scenes here that didn’t make it to the final feature.

You get 4 varieties of trailer, Original, Overseas, TV Spot and US Trailer.

Finally you get previews for other Madman, and indeed Manga titles, Puella Magi Madoka Magica, Eden of the East: The Movie 2 Paradise Lost, Bleach the Movie 3: Fade to Black, and the Fullmetal Alchemist Brotherhood OVAs. 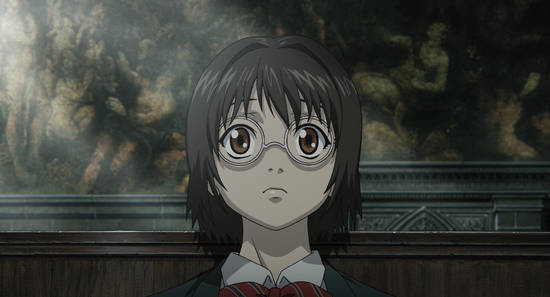 King of Thorn is bad. It is really bad. It’s bad enough for me to be grateful that I didn’t get to see the rest of that manga. When it opens with a whopping great plot hole in the first place, one that it never even bothers to address, even going as far as hand-waving it away in the dialogue, you know the writers were having a bad day. A plague is ravaging the land, with a 100% fatality rate. 160 people sign up to be frozen in the hope that when they wake up there will be a cure. So who’s going to make this cure? All those corpses that didn’t get lucky in the freeze-all lottery? This deserves a full on, James Finlayson “D’oh!”

Fortunately for King of Thorn, it ventures into the so bad it’s good category. You have to switch off your brain for the duration though, lest you actually pay attention to all the stupid narrative it throws at you. It starts off with a conspiracy so convoluted that you’d have expected this to be another 20th Century Boys. It’s not. It’s just 5 minutes of blah to get the plot in motion. There are other moments where infoblasts are fired at the viewer, and it’s better to just ignore them. Some of the exposition will have a bearing on the story, but you have to wade through so much nonsense to get to the meaningful stuff that you’ll be wasting your time, when you should be watching the movie instead. 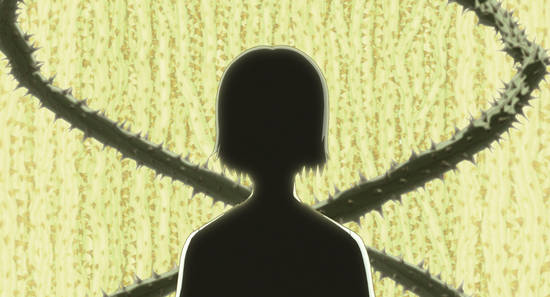 The movie is cheesy fun if you take it at face value. It’s a survival horror with a whole lot of action to it, and I got an appreciable Resident Evil vibe from proceedings which doesn’t hurt it one bit. You have seven mismatched characters having to band together against various alien-type critters to stay alive, and you can play guess the next victim as the film progresses. The action is well animated, the pace well judged, and in terms of characterisation, King of Thorn actually gets it right. The interactions between the survivors is interesting, particularly convict Marco Owen and the protagonist Kasumi.

And then we get to the crux of the film, which I am going to spoil, but since I am slating this film, I need to justify it. I’ll try and be oblique, but we are getting into a discussion about dreams and reality here, and when you’re talking dreams within dreams, it can be confusing to bring about on screen. Get it right, and you have Inception. Get it wrong, and you have a mess. King of Thorn gets it spectacularly wrong. The climax of the story is a disjointed, aimless, senseless jumble of ideas and thoughts, none of which really works, and after 5 minutes I gave up trying to comprehend. 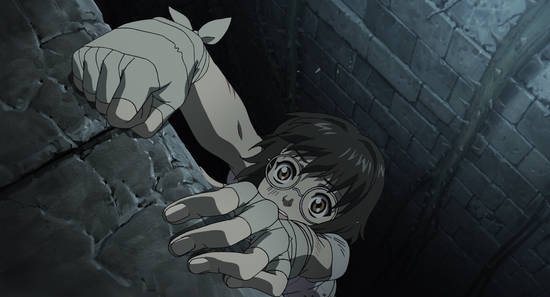 It somehow manages to pull something together for the finale, and I have to admit that I did like the way the story ended, even if it left 90% of the questions in this film unanswered. Half of King of Thorn is a really enjoyable, b-movie, a pulse pounding post-apocalyptic survival horror. The other half is just the most pretentious claptrap. There aren’t any brain-dead zombies in this horror flick, but a brain-dead zombie watching it will be able to derive the most pleasure from it.