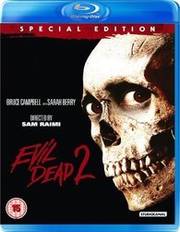 Synopsis:
Ash, (Bruce Campbell: Army of Darkness), the sole survivor of THE EVIL DEAD, takes his girlfriend Linda (Denise Bixler: Crisis in the Kremlin) to a secluded cabin in the woods where he plays back a professor’s tape recorded recitation of passages from the Book of the Dead.

The spell calls up an evil force from the woods that turns Linda into a monstrous Deadite, and threatens to do the same to Ash. He is forced to single-handedly battle the legions of the damned as the most lethal – and groovy – hero in horror movie history.

Cabin Fever: a fly on the wall behind the scenes (new!)

Archival Featurettes: Behind the screams / Making of ED2 / Theatrical