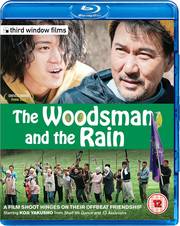 The Woodsman and the Rain (Blu-ray Details) 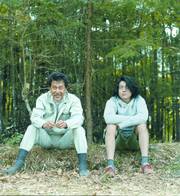 Blu-ray
The Story of Yonosuke

Review for The Woodsman and the Rain

Rightly or wrongly, I often try and find a point of comparison with new films, find some way of associating them with something I have previously seen, either in that genre, or by the same director. When The Woodsman and the Rain turned up for review, I had a quick look at the blurb, and its tale of a film company ‘invading’ a small mountain village to film a zombie movie for some reason put me in mind of an Alan Alda movie I once saw called Sweet Liberty, in which Hollywood takes over a small town to film an American civil war film. It’s funny the tricks that the mind plays, as it’s been several years since I last saw Sweet Liberty, and it’s nothing like how I recall it. It also turns out that The Woodsman and the Rain is nothing like either Sweet Liberty the film, or the Sweet Liberty of my memories. It’s actually a whole lot better.

Katsu works as a lumberjack in the forests near his village home. It’s coming up to the anniversary of his wife’s death, he’s failing to communicate with his layabout son, and his doctor has told him to watch his blood sugar levels and lay off the sweets. All he has going for him is his job and an uncanny talent at predicting the rain. He doesn’t think much of it, when one day a film producer shows up and asks him to switch off his chainsaw as they are filming a movie, but when later he runs across a van stuck in a ditch, he winds up giving a lift to the same producer and a sullen young man as they go location scouting. 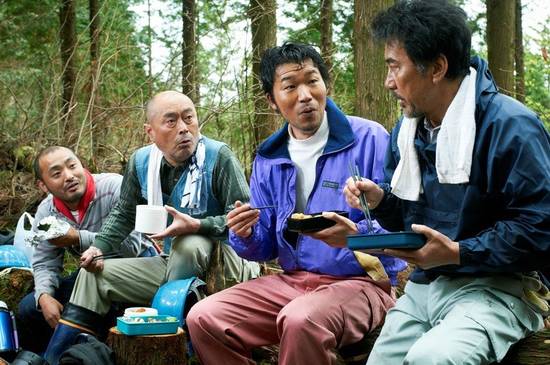 As they look for the ideal location, Katsu becomes more and more irritated at the man’s attitude, just sitting there while the producer does all the work. But when he challenges him to get out and help, the producer seems to rebuff the young man’s aid. When later Katsu get co-opted into becoming an extra on the film, he’s struck with how the young man is pushed around and bullied by the rest of the film crew. When Katsu gets invited to see the rushes, and gets to see himself on screen, he begins to understand the magic of filmmaking. The young man by the way is Koichi, and he’s the film’s director. He’s completely lost the magic, and would much rather be anywhere else.

The Woodsman and the Rain gets an impeccable transfer on this Blu-ray disc at the 1080p 1.85:1 widescreen ratio. The image is clear and colourful throughout, detail levels are high, and there is no sign of compression. HD TV manufacturers often use images of nature and wildlife to extol the virtues of higher definition, and when your opening scene is in a sun-dappled forest, you certainly get your money’s worth when it comes to eye-candy. The production design is interesting, with some rich locations and sets, and there’s always something going on in each frame.

The images in this review are taken from the PR, and aren’t necessarily representative of the retail release. 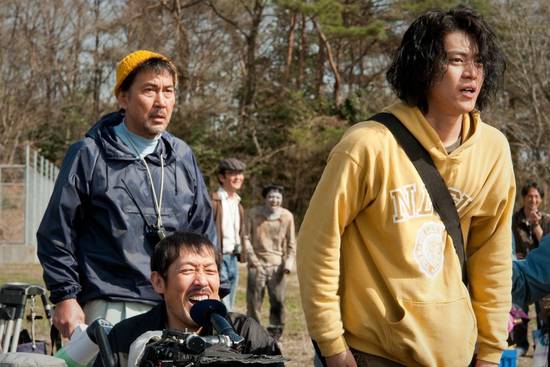 The sole audio track on this disc is a robust DTS-HD MA 5.1 Surround track. The dialogue is clear and front-focussed for the most part, while the surrounds are used mostly for ambience. It’s not an action oriented film, so don’t expect the liveliest of sound designs, but The Woodsman and the Rain is a pleasant enough viewing experience, with a very mellow, if sparsely used music soundtrack. The subtitles were accurately timed, in a bold white font, and free of error.

The Woodsman and the Rain is presented on this Blu-ray with an animated menu screen, from which you can access the film, the scene selections, and the subtitle options.

In the extras you’ll find HD trailers for this film, Kotoko and Tetsuo.

There are almost 15 minutes of deleted scenes presented in 480i resolution. These are preceded by white text on black captions explaining the scenes and where they go in the film.

Also in 480i is the Interviews featurette, which sees the director and two lead actors talk about the film. This is intermixed with on location footage of the director visiting his old school and university, relating how he got into filmmaking. This lasts 28½ minutes.

This keeps on happening. Third Window Films release a new title, and I wind up urging you to buy it. One of these days they’ll release something mediocre and lacklustre, and I’ll fall off my seat in shock, but not today. The Woodsman and the Rain is a brilliant, witty, gentle-paced character comedy, one that builds on the culture clash of slow village life and the world of movie making. It has driving its narrative two very engaging characters, and it develops those characters in a very moving and heart-warming way, albeit subtly, understated to the point of being all subtext. It’s a magical, enchanting film, albeit one that grows slowly at its own pace over the two-hour plus runtime, and it is wholly rewarding to watch. 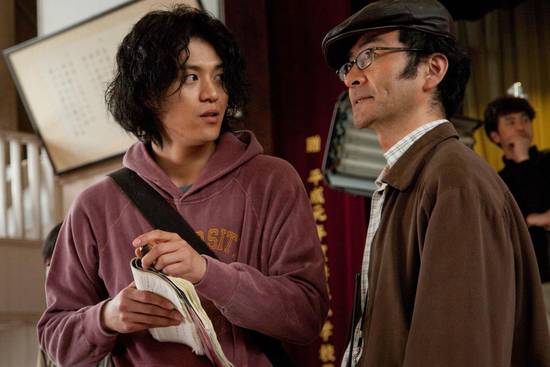 In some ways it’s like a road movie without a physical journey, as we follow Katsu and Koichi on their joint voyage of spiritual growth. When we first meet them, Koichi is withdrawn and sullen, the nominal director of the zombie movie, but one who seems to be there on sufferance. He’s belittled and refused respect by his film crew and his cast, not helped by his introverted nature and a lack of confidence. Katsu on the other hand has withdrawn in another way, still working as a lumberjack, and involved in his community, but not exactly outgoing since the death of his wife, and unable to communicate with his son.

When the two meet their lives begin to change for the better. Katsu is inspired by the magic of filmmaking, and winds up becoming more and more involved in the film, despite himself, while Koichi winds up drawing strength from a sympathetic father figure helping him build the confidence he is lacking. What’s really engaging about the film is that there’s no single moment that you can point to, where you can say that the characters change. You can see the differences in them at the end of the film compared to the beginning; the process is subtle, underplayed and deceptive. The journey that both travel is bumpy and tentative, and the way their characters grow is natural and unforced.

What’s delightful about the comedy is the way that the synergy builds between the villagers and the filmmakers. Once Katsu becomes involved in ferrying the film crew around, and even gets a part as an extra, he winds up piquing the interest of his fellow lumberjacks. Pretty soon they are extras as well, and slowly the rest of the villagers too become involved. This has the effect of in turn inspiring the filmmakers, who up to that point seem to be going through the motions of making a thankless film, but who then become infected by the villagers’ enthusiasm.

I still like to find points of comparison in the films I watch, and I realised as I was watching The Woodsman and the Rain that it has a lot more in common with one of my favourite British comedies, Local Hero. That two was a tale of an unlikely culture clash, that of Texas Oil and small village life, it too revelled in the idiosyncrasies and absurdities of the two different worlds, and it too had its characters impacting and affecting each other in understated and often deceptive ways. Just like that film The Woodsman and the Rain has two disparate worlds coming together and orbiting for a while before resuming their separate journeys, but the trajectory of each has been altered by the other, and altered for the better. The film gets a worthy Blu-ray release from Third Window Films, and you’d be remiss if you didn’t pick it up. 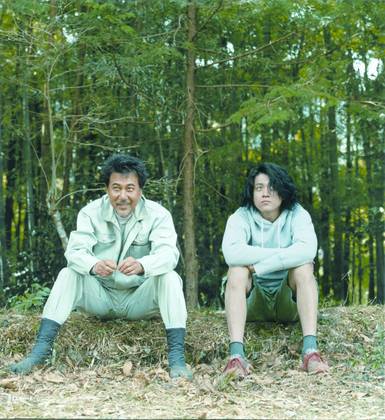