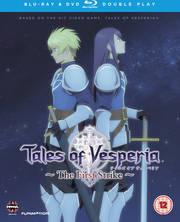 Review for Tales Of Vesperia: The First Strike - Double Play

It’s in over my head time again. All of a sudden, an anime movie Blu-ray check disc appears to which I pay little mind, but when I take a look at the various anime forums, the social networking sites, I’m overwhelmed with the sort of fan enthusiasm for a title that I haven’t seen since the Professor Layton movie. And there we have a common connection, as Tales of Vesperia: The First Strike is based on a computer game. Actually it’s based on a series of computer games... a best-selling series of computer games. I don’t know from computer games anymore. It’s been so long since I last grabbed a joystick that my memories are of the 32-bit variety. I played games when people used to boast about polygon count. These days, the closest I get to a videogame is reviewing the anime or movie spun-off from it. So don’t expect any sterling insights into how this ties into the Tales of series, and don’t expect me to be thrilled at learning the back stories of characters from the Tales of Vesperia game, which I had quite obviously never even heard of before I watched the movie. For me, Tales of Vesperia: The First Strike is just another fantasy movie. But is it any good?

Long ago, there was a war between Monsters and Humans. A new form of energy was discovered, Aer, which when collected and crystallised formed Blastia, a source of power for all sorts of magical weapons and devices. But while people use Blastia, its true nature is yet to be understood. Those mysteries are a reason why a small town is currently under siege by monsters. Its defence falls to a brigade of knights led by Captain Niren Fedrock. Two of the youngest knights are Flynn Schifo and Yuri Lowell, two boys who grew up together, went their separate ways, and wound up enlisting in the same army. They have a tendency to rub each other the wrong way, Yuri is laid back and easy going, while Flynn is more strait laced and by the book. They’ll have to set aside their differences when it becomes clear that the onslaught of monsters is being caused by mysterious, tainted Red Aer emanating from some ruins in the middle of the forest. When Fedrock requests reinforcements to investigate and is refused, he decides to disobey his orders and go into the forest anyway, and that raises the spectre of buried memories in Flynn Schifo. 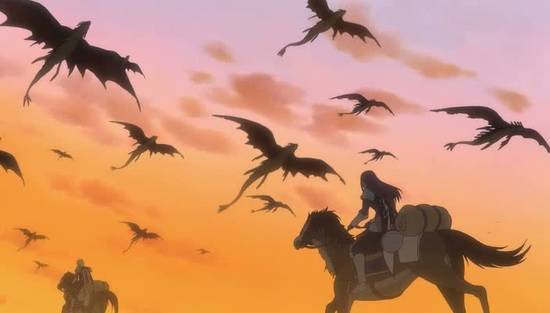 Tales of Vesperia: The First Strike is released as a Blu-ray/DVD combo, but I only received the Blu-ray check disc to review.

This Production IG feature gets a 1.78:1 widescreen transfer at 1080p resolution on this BD25. It isn’t the most striking of HD anime, although much of that is down to the subdued pastel palette of colours, a general softness and haziness indicative of the autumnal setting, and with the character designs lacking in detail. There is greater detail in certain scenes, and especially in the backgrounds, while the clarity of some of the CG and effects work does remind you that you are watching a Blu-ray, but generally it didn’t feel too far removed from a DVD presentation. There’s also some slight banding in certain scenes which doesn’t help. Production IG go to town in some of the action sequences, and they actually make bullet time feel as fresh as it did 13 years ago in The Matrix.

The images used in this review are sourced from the PR and aren’t representative of the final retail release.

You have the choice between Dolby TrueHD 5.1 Surround English and Japanese, with optional subtitles and a signs only track. For me the audio was a little on the quiet side, requiring a little adjustment. I went with the Japanese audio and was very happy with the results, with the film getting effective surround for the action moments, and nice placement of dialogue and effects. Akira Senju, who composed the music for Fullmetal Alchemist Brotherhood, provides the music here, and it’s a suitably grand orchestral score which works well with the fantasy setting. The film also gets a nice end theme from Bonnie Pink. I gave the English dub a shot, and for me it was one of Funimation’s lesser efforts, with none of the performances particularly striking. In fact, I found that the voice actors for Yuri and Flynn tended to sound alike whenever they shouted, and they shout at each other a whole lot more in the dub version than they do in the original language. 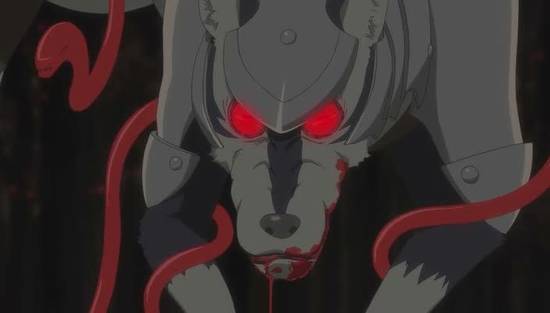 The Blu-ray is just the Funimation disc, with no Manga rebranding or logo. The disc autoplays with the trailer for Fractale (if there is any justice Manga will release it on Blu-ray). You get a nice animated menu, while the only extras are promotional materials for the film. Promotional Footage Collection collects some trailers in a 9-minute showreel. Picture Sound looks to be the Flynn flashback from the movie all edited together and lasts just under 4 minutes. There is the US trailer, and finally Funimation previews for Fullmetal Alchemist Brotherhood, Dragon Age, .hack//Quantum, Sengoku Basara, and Dragon Ball Z Kai, all in HD. There are also SD trailers for The Tower of Druaga and Disgaea, as well as a promo for Funimation’s website.

That was passable entertainment. Tales of Vesperia: The First Strike is a pretty enjoyable fantasy film, with a nice premise regarding Aer and Blastia, a couple of very engaging lead characters in Flynn and Yuri, and replete with some excellent action sequences, some entertaining comedy scenes, and for Flynn at least, a worthwhile character arc. It manages to mostly hold the attention, and even after I found myself drifting away around the halfway mark, it managed to pull me back. If you’re after some sword and sorcery fare in animated form, then Tales of Vesperia: The First Strike will provide some satisfaction. 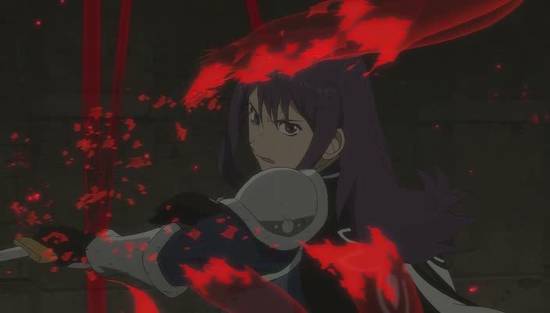 Coming as a complete novice to the franchise however, I have to wonder just why it is that I did drift away in the middle of the movie, and I have to say that it’s just too bloated. If you are a fan of the games, know that story inside and out, you’ll probably like the diversion to the ‘expert’ on Aer and Blastia in the middle of the film, you’ll probably understand the significance of the obnoxious commander in chief at the capital, and get the whole Flynn and Estellise side-story. I don’t know any of these characters, and I certainly don’t understand their significance to the franchise. The problem here is that there’s often no point at all in having these cameos in the movie. These scenes are obviously just nods and winks to the fans of the games, but all in all, they pad the film out too much.

If you want the core story in the film, the mysterious ruins, the contaminated red Aer, the monsters, and the knights protecting the town, and the fractured relationship between Yuri and Flynn, then you could efficiently tell this story in ninety minutes. You could also increase the focus on the friction between the Knights in the town, and the Guild. Most importantly you could keep the conspiracy behind the whole thing centre stage, as that’s really the driving force behind the narrative. Too often the gifts to the fans would distract from the story, and like an afterthought we might get a bit of narrative from time to time. But it was all diluted and weak, and by the time the villain of the piece was revealed, I had lost any emotional investment in just who it turned out to be. 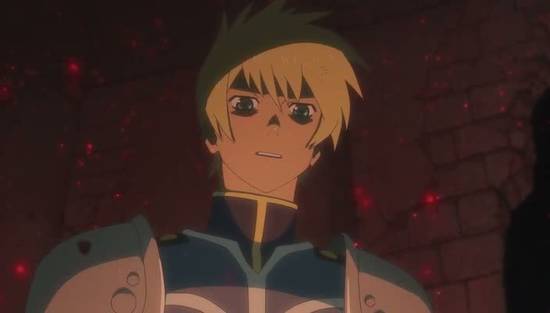 To rub salt into the wound, as the end credits roll, we get a series of scenes from what apparently happens after the film, and they promise a story that’s actually bigger and better than what we get here. I would hope that they are clips from a forthcoming second Tales of Vesperia film, as while the film itself wasn’t executed all that satisfactorily, it does sell the world and the characters in a way that makes them appealing. However, my instinct is that there is no second film, and that the credit reel merely showcases some cutscenes from the game. Fans of Tales of Vesperia will get a lot more from The First Strike than I did. But if you’re a newcomer to the Tales of franchise, then prepare for an average experience. 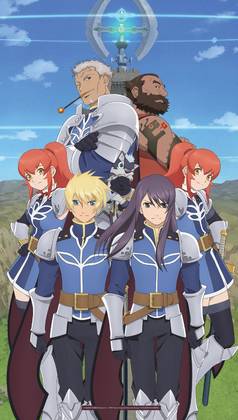