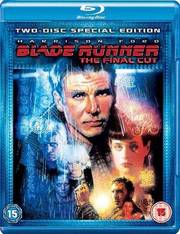 The story of Blade Runner is familiar to countless fans. But few have seen it like this. Because this is director Ridley Scott's own vision of his sci-fi classic. This new version omits Deckard's voiceover narration, develops in slightly greater detail the romance between Deckard and Rachael (Sean Young) and removes the "uplifting" finale. The result is a heightened emotional impact: a great film, made greater. Most intriguing of all is a newly included unicorn vision that suggests Deckard may be a replicant. Do Androids Dream of Electric Sheep? Is Deckard a replicant? As with all things in the future, you must discover the answer to find yourself .

Special Features:
Commentary on The Final Cut by Ridley Scott

Documentary: Dangerous Days - Making Blade Runner - A feature-length authoritative documentary revealing all the elements that shaped this hugely influential cinema landmark. Cast, crew, critics and colleagues give a behind-the-scenes, in-depth look at the film -- from its literary roots and inception through casting, production, visuals and special effects to its controversial legacy and place in Hollywood history.