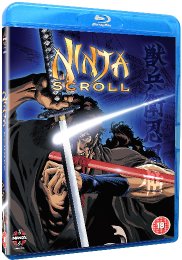 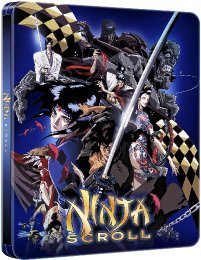 Familiarity really does breed contempt. I must have first seen Ninja Scroll in the mid-nineties, around the time that Channel 4 were doing their late night anime showings. It was when anime was being sold on controversy, on tabloid inches, and on Middle England ire. I was of an age to buy into that, and my anime purchases were consequently of the 18 rated, sex and violence variety. Ninja Scroll was one of my prize possessions at the time, a VHS tape that saw a lot of play. By the time it came to upgrading to DVD, I was quick off the mark, and got the first Manga release, just as BBFC’d as before, and offering little more than the VHS other than the original language. I watched this a few times before I got around to reviewing it, and by then I had seriously outgrown the last vestiges of teenage rebellion that had first drawn me into anime. I was tired of the sex and violence era, and the BBFC cuts really jarred.

At this point however, the cuts had been waived and Ninja Scroll re-released in a special edition, only I couldn’t be asked to upgrade, seeing the movie as little more than a parade of ninja freaks, in an exploitative story from an era I was trying to forget. You can imagine that when the Blu-ray turned up for review, I was one of the few people in anime fandom who wasn’t thrilled. That’s despite Yoshiaki Kawajiri returning to his seminal work and making sure it got a restoration deserving of an HD outing. There’s quite a bit of renewed interest in Ninja Scroll with a sequel movie apparently in production. But for me, I just put the Blu-ray into the player hoping for a sharper picture, clearer sound, and that I wouldn’t fall asleep halfway through the film the way I have the last three times I’ve tried to re-watch it. 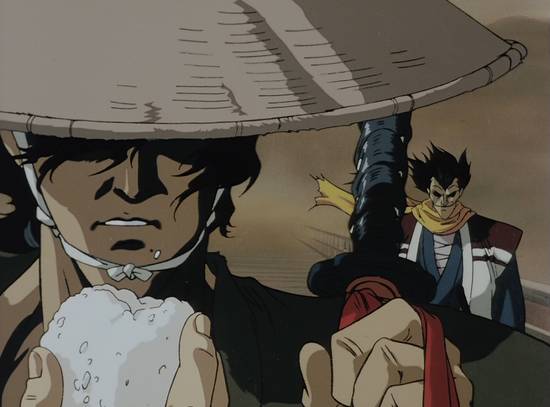 Set in the era of the Tokugawa Shogunate, Ninja Scroll relates the tale of Jubei, a wandering ninja for hire who gets caught up in intrigue when he rescues Kagero from the lascivious clutches of a brutal warrior. The beautiful Kagero is the sole survivor of a group of ninja sent to investigate the cause of a plague that has wiped out the village of Shimoda. They go their separate ways, but the warrior is intent on revenge after having his fun interrupted. Jubei manages to defeat the monster, a fight that is appreciated by master spy Dakuan, who tries to hire Jubei. When Jubei is reluctant, Dakuan resorts to other means of persuasion, giving Jubei a slow acting poison, a poison that only Kagero has the cure for. Soon the three of them have to unravel a web of intrigue involving the eight devils of Kimon, who are attempting to topple the Shogunate and plunge Japan into an eternity of darkness. Jubei will be surprised to find that the enemy leader wears a familiar face. 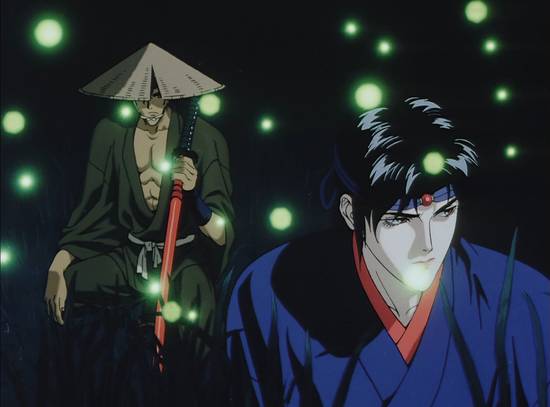 Ninja Scroll gets a 4:3 pillarboxed transfer on this BD 25 at 1080p resolution. If all you’ve ever seen is that videotape, and the first DVD, with its soft NTSC-PAL transfer, replete with ghosting, cross-colouration and artefacts galore, then you are in for the shock of your life. Ninja Scroll on this Blu-ray is pristine. It’s had a full restoration, with the removal of dirt and print damage. The image has been stabilised throughout, there are none of the jumps in frames that you get in traditional cel animation and the film retains its natural grain.

The artwork is sublime, exhibiting stupendous clarity and sharpness, colours are intense, black levels are excellent, and it’s all been done without any apparent DNR of the sort that has some people complaining when it comes to the UK Ghibli Blu-rays. You will see detail, aspects of the movie that you will have missed on any earlier releases. One obvious thing I noticed for the first time is that Gemma doesn’t have an anachronistic cybernetic arm; he’s actually wearing armour over his natural arm. 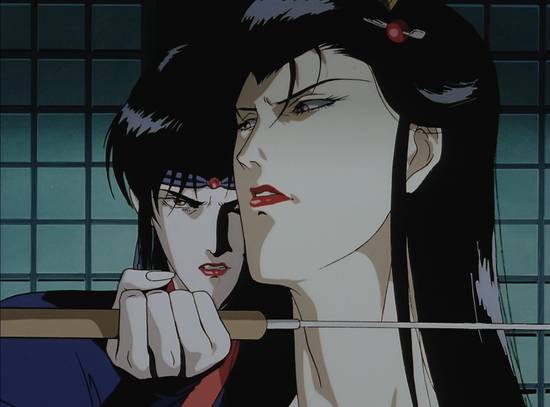 You have the choice between DTS-HD MA 5.1 Surround English, and PCM 2.0 Stereo Japanese, with optional translated English subtitles. I may take a chance and re-evaluate a movie from nigh on twenty years ago, but I draw the line at choosing to listen to an old Manga Video dub, although from what I sampled it seemed a little blunt, a predominantly front focussed affair which a little too obviously started throwing giant shuriken around the soundstage.

But the Japanese stereo track was an utter delight. The dialogue is clear throughout, and the music comes across well. What astounded me was the depth, and indeed subtlety of the sound design. It is a front-focused stereo affair, but there is a surprising degree of creativity and immersion to it. The opening scene when the Koga ninja are travelling through the forest at night, there is a wealth of audio to appreciate, layers of sound design that really bring that forest to life, and it’s as if you’re right in the middle of it. I actually found the Japanese audio for Ninja Scroll to be more immersive than some dedicated 5.1 mixes. 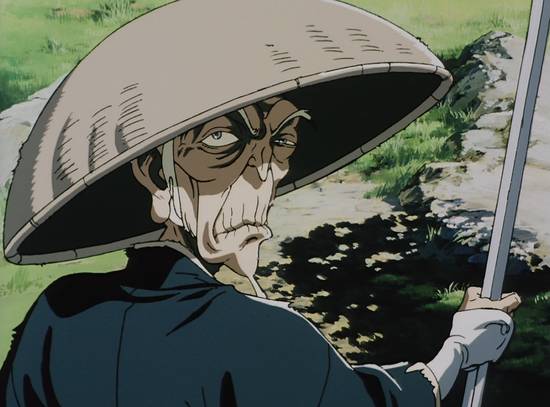 Ninja Scroll is being re-released on DVD, as well as making its debut in high definition. But the jewel in the crown is the Steelbook release, which will have the DVD and Blu-ray, as well as a booklet from Jonathan Clements on the movie.

I only received the Blu-ray check disc for review. It presents the film from a nice, animated menu, with 12 chapters.

The only extras are the trailer, and a TV Spot, both presented in 1080i resolution, and offering a little of the old DVD quality for you to compare and contrast. It’s no wonder I used to fall asleep to this film. 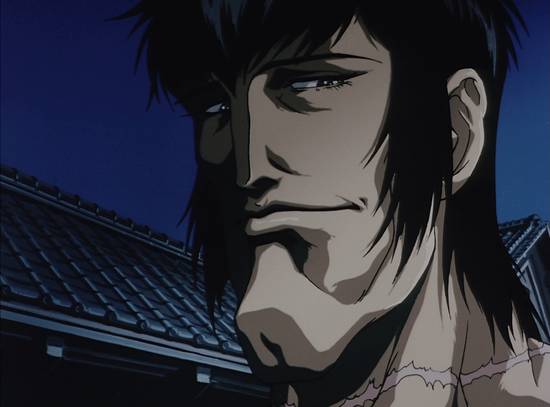 Of course the big extra on disc, and quite a coup given the scarcity of such material from Japanese creators in the West, is the audio commentary from director Yoshiaki Kawajiri, animation director and character designer Yutaka Minowa, and writer Hiroyuki Ohnuma. Naturally it’s in Japanese and subtitled in English. The creators get together 20 years after making the film to comment on it, and what results is a very candid and critical reappraisal of the film, in a light and entertaining chat.

The first revolution in video home entertainment was VHS, allowing people to rent and buy movies. The second revolution was widescreen VHS, allowing cineastes to finally see their favourite films in the original aspect ratio. That took a while to catch on, as it preceded the debut of widescreen TVs by a few years. I still remember the adverts for one of the first titles in that format... “So you think you’ve seen all of the Star Wars legend on video... Well think again!” We’re in the fourth revolution of home entertainment now, the advent of high definition, and I have to paraphrase that tagline... “So you think you’ve seen Ninja Scroll on home video... Well think again!”

I resigned myself to watching this film for probably the tenth time, tired and worn out, its story already seared onto the surface of my brain, and fully expecting to be snoring by the time Tessai had met his maker... And it was like I had never seen this film before. Last night I really did see Ninja Scroll for the first time, could really appreciate the artwork and the character designs, the effort gone into the film’s sound design, and most of all I got the story. I engaged with the characters, I lost myself in the narrative, and I could appreciate the plot. Admittedly the last few years of samurai entertainment have given me more of a grounding in the era that Ninja Scroll is set in, and that helps to better understand its overall story. I could also appreciate the sly humour of Dakuan more, and grew more invested in the relationship that develops between Jubei and Kagero. 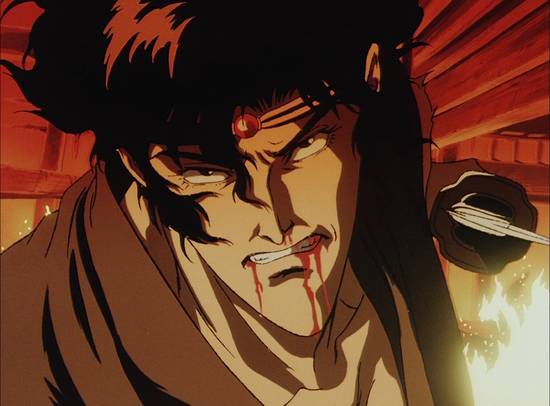 On the surface Ninja Scroll is still that combination of sex and violence, punctuated by ninja freaks, but for the first time in years I took a look beneath that surface and realised the depth and complexity behind the story. It’s a cleverly told tale, one which doesn’t simply dole out narrative, but makes you work at it, asks that you piece the plot together for yourself, and last night I realised that it rewards those who give it their full attention, not those who take it as an uncomplicated garnish for beer and pizza in the way that it was sold back in the nineties. Incidentally, Ninja Scroll has had its cuts waived since 2004, and that’s the version presented here, the version I’m seeing for the first time. Boy, the BBFC were scared of shuriken back then, and the scene with Kagero and Tessai makes a whole lot more sense.

I fell out of love with Ninja Scroll a few years ago, but this Blu-ray release not only reminded me of what I fell in love with in the first place, but it also revealed aspects of the film that I never appreciated before. It’s a smart and entertaining action thriller that has surprising dimension. If there is one charge to be laid against Ninja Scroll, it’s that it’s probably to blame for all the superpowered ninja that we’ve had to put up with ever since. Before Ninja Scroll, ninja were just sneaky assassins clad in black that tried to drip poison into James Bond’s mouth. After Ninja Scroll we got shows like Naruto, where they’re no longer sneaky, and instead are capable of feats that make Gemma’s immortality seem like old hat. That aside, I have to reiterate, if you’ve only seen Ninja Scroll on DVD up till now, then you’ve never really seen Ninja Scroll!