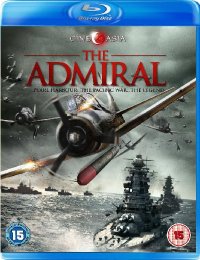 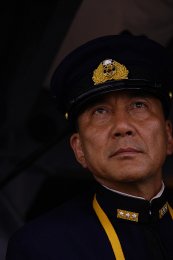 Blu-ray
A Fugitive From the Past
Related Articles

‘History is written by the winners’ is a well worn cliché, but I do get to wonder sometimes just what kind of history the losers would write. Would they be revisionist too? How much of their history would be coloured by guilt, or resentment, how much of it would be rewritten to conform to how the winners view them? One thing is for certain, the World War II movies that come from the former axis powers will present a wholly different perspective on the war than those of mainstream Hollywood. Germany has given us the epic Das Boot, and more recently the Youtube meme inducing Downfall. But Germany’s post war reconstruction was relatively trouble free, aside from the Cold War schism. They were able to cut out Nazism like a cancer, and step away from that hideous ideology.

The reinvention of Japan was not as simple, as they had no such ideology to shun, just rampant nationalism and expansionism. And in the post war years they were occupied by the US, who went and reformed Japanese society into a sort of distorted mirror image of their own. Now, as the generation that fought the Second World War continue to pass, Japan’s collective guilt over the war is beginning to fade, replaced with a resurgent national pride as the Far East once again becomes a potential flashpoint between the local powers. It’s this Japan, uncertain of its identity that has produced The Admiral, a.k.a. Admiral Yamamoto, a.k.a. Isoroku Yamamoto, the Commander-in-Chief of the Combined Fleet, which Cine Asia is now releasing on DVD and Blu-ray. 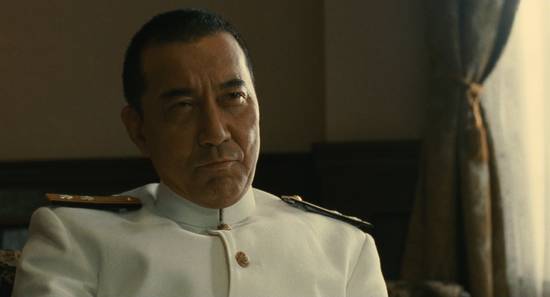 The pre-war years saw much interest in Imperialist expansion in Japan, following simple victories earlier in that century in Russia and China. The thought was that fighting on foreign land, Japanese forces were indomitable, and when the opportunity of the Tri-Partite Pact arose, it seemed the ideal way to throw off the yoke of the expanding US influence in the region. The Army was for it, the Government was for it, and even the people were for it. It was only the Navy that opposed the treaty, and the prime sticking point was Undersecretary Yamamoto, which made him an unpopular figure.

It was an assassination attempt that saw him ‘promoted’ to Commander in Chief of the Navy, and once away from the ministry, it wasn’t long before the Navy was also persuaded to be in favour of allying with Germany and Italy. Now Japanese influence in the region could be properly promoted, and their reliance on US steel and oil replaced with local resources through expansion. The one problem was the US Pacific Fleet. It fell to Yamamoto to come up with a plan to do away with that problem. An honourable man ordered to fight a dishonourable war, the plan he came up with was Pearl Harbour. 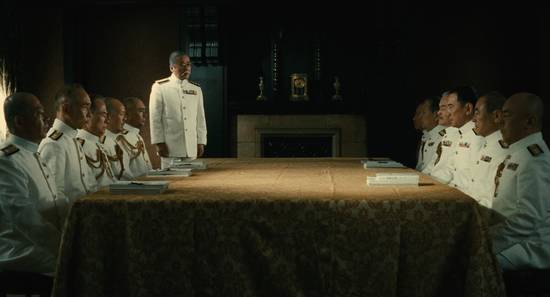 The Admiral gets a 1.85:1 widescreen transfer at 1080p resolution. It’s a fair enough transfer, clear and sharp in brighter scenes, but somewhat subdued in darker scenes, of which there are many. In particular, there is rarely enough detail in the black Japanese naval uniforms, and shadow detail is always crushed. Another issue that may disappoint is that the CG used for the battle sequences, and recreating the WWII battleships is never strong enough to convince. Fortunately, the hardware and the action are secondary to what the film achieves. Other than that, the film does a fine job in terms of production value, in recreating sets, costumes and the general feel of the period.

You have the choice between DTS-HD MA 5.1 Surround, and PCM 2.0 Stereo Japanese, with optional English subtitles. It’s a dialogue heavy film, and said dialogue is clear throughout. The subtitles are timed accurately, and are free of error. The film’s music suits the story well right up to the rather inappropriate power ballad over the end credits, and the surround really does kick in well for the film’s few action sequences. 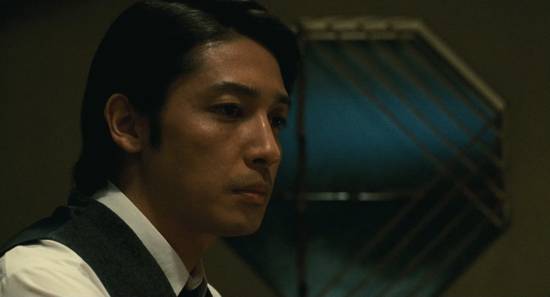 The disc gets an animated menu, but the only extras are trailers, three original trailers for this film, and 12 trailers for other Cine Asia product.

It’s not an action movie. The artwork may suggest otherwise, and Cine Asia’s regular output of Hong Kong action may give the impression that this is the Japanese answer to Michael Bay’s extended pointlessness, but it most certainly isn’t. The Admiral is something a whole lot better, a character study and an exploration of Japanese society prior to, and through the war years. It gives some idea as to the forces that pushed Japan towards war. It’s not excessively apologetic, nor does it gloss over the responsibility that Japan had in the war. It’s a balanced and insightful biography that gives the other perspective to World War II. It tells the story of Isoroku Yamamoto first and foremost, focusing on the pre-war years through Pearl Harbour and Midway, up to his death, with a little insight into the childhood that shaped him, and the legacy he left behind. This is done through the prism of the Japanese Navy which he served, and finally at a further remove from the viewpoint of the forces that pushed the country into war. And yes, you may find yourself rooting for a Zero pilot as he battles against overwhelming odds.

The Admiral really shouldn’t work as well as it does, as it’s more of a small movie, really a stage play, wearing epic clothing. With the advent of egregious CGI, the story can be punctuated with dogfights, fleet manoeuvres and grand oceanic vistas, but the actual story itself is small scale, focusing on characters and dialogue. We have the Admiral himself and the navy, there’s also a newspaper office and its writers, and also a street cafe where the average man in the street will meet to talk about the day. What links the three is a writer who accompanies his editor to interview Yamamoto, and who goes to the cafe to unwind after work. 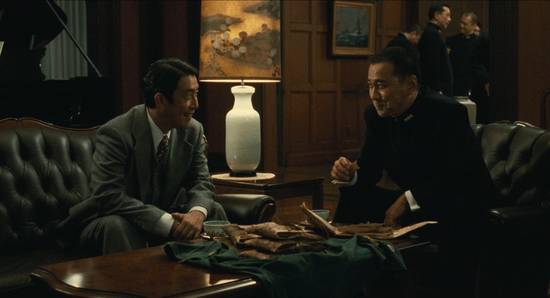 We begin the movie with the Tri-Partite Pact under negotiation, and with the Navy refusing to endorse it. Practically everyone else wants to further Japanese expansion, and the first scene in the film shows the resulting tension that arises between the Army and the Navy. We also see the internal tension in the Navy itself with some pushing for war as well. It’s Yamamoto who understands that they’d be provoking the wrong enemy if they fight against America, despite the legitimate grievances they have had since the Black Ships, when the US forcibly opened Japan up to foreign trade.

At this point, the US had more resources, and was out-producing Japan in every sphere of manufacturing, while Japan had to rely on US imports for fuel and steel. For Japan to be truly independent, they needed resources of their own, which is why the Tri-Partite pact seemed so desirable. They also had the example of recent history, with easy victories in China and Russia, and following the Great War, the idea that war stimulated the economy. The Japanese people thought that war only happened overseas, it was easy, and it made them money. It’s no wonder that much of the population supported expansion. 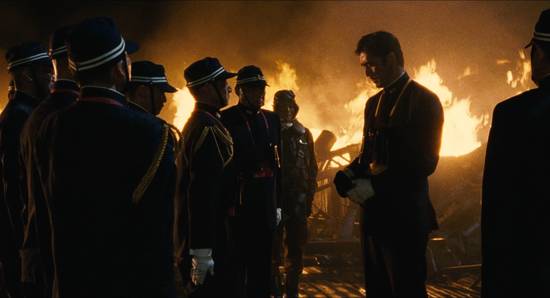 The film also shows how the people were manipulated, not least by the press. In fact the only real villain in the movie is the Editor in Chief of the newspaper, a man keen to promote a martial agenda in his reportage, rather than simply presenting the news, a man who gets angry at Yamamoto when he doesn’t reply the way that he wants for his readers. We also learn that the Japanese translation of Mein Kampf was edited to remove certain denigrating opinions of the Japanese. It’s very interesting to see how the people and the media and the military goaded each other into war, a relentless force against which the Navy was the one bulwark. It’s Yamamoto’s unpopularity at the time that served to remove him from his position of influence, and once war was declared he was honour-bound to pursue it.

Except that war actually wasn’t declared, and this resulted in the aggressive response that ensued. Yamamoto was tasked with coming up with the plan for the Pacific theatre, the endpoint being a way for Japan to maintain its hold on the territories it planned to acquire. Yamamoto’s plan was to declare war, knock out the US fleet, then sue for peace through a position of momentary strength. Only the ambassador delivered the declaration after the attack. 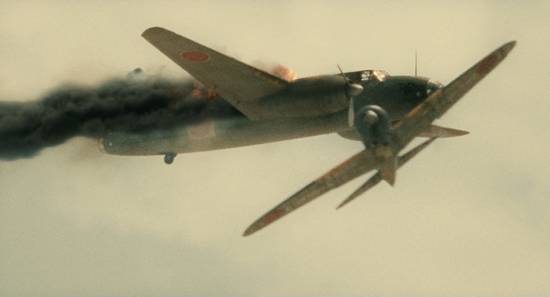 The Admiral works well, not least because of a charismatic performance by Kôji Yakusho in the lead role. He creates a complex and nuanced character that carries the film. Yamamoto was the last reasonable man in a nation that was rapidly devolving into an insanity of nationalistic fervour. It seems that he alone had an endpoint in mind when prosecuting the war, that his ultimate goal was to end it, and the contrast between the reasonable strategies he pursued, and the utter devastation that occurred following his death and up to the conclusion of the war is striking. This film provides the ultimate irony in that the man who was responsible for the day that will live in infamy may have been the only person sane enough to end the war. If nothing else, The Admiral gives a very welcome balance to what’s often been a one-sided view of history. Very much recommended.