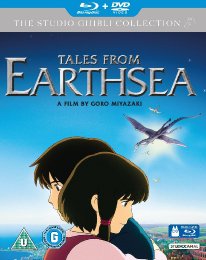 Blu-ray
Nausicaa Of The Valley Of The Wind
Related Articles

It's time for another instalment of Studio Ghibli Blu-rays courtesy of StudioCanal, as the gradual upgrade to high definition continues. I have to admit that I'm not all that enthused about June's offerings, although that's mostly because my interest in Studio Ghibli lies pre-Spirited Away. This month we get movies that number among the studio's twenty-first century output, films that I haven't followed as religiously. On the bright side, they ought to look absolutely devastating on Blu-ray. The first film I'm looking at this month is Tales From Earthsea, the one Ghibli film that tends to slip from most people's minds. For one thing, it's not directed by Hayao Miyazaki, rather his son Goro, and the other thing is that it wasn't received with any major acclaim when it was first released. In fact, it was seen as a rare, Ghibli disappointment. It's telling that Goro Miyazaki's second feature from Studio Ghibli, From Up on Poppy Hill, is the first Ghibli movie in recent years not to have been licensed by Disney pictures for US release.

Several of the Ghibli features in recent years have looked West for inspiration, adapting Howl's Moving Castle and The Borrowers. Tales From Earthsea adapts Ursula K. Le Guin's Earthsea books to the animated medium, and I have to admit that this is my first encounter with the Earthsea universe. This Blu-ray release from StudioCanal is a 2-disc, dual-play release, with the film on Blu-ray with extras, and a barebones DVD. 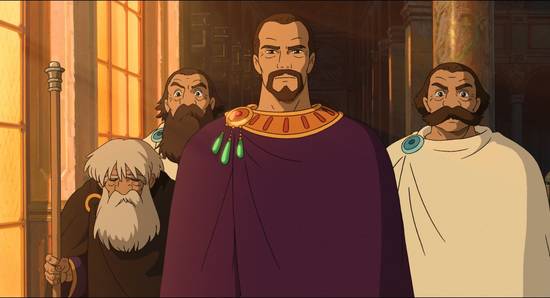 The world is in strife. Magic is waning, crops are dying, an unexplained plague is spreading across the land, and all of a sudden, dragons have been witnessed in the skies. The story goes that in the beginning, dragons and men were one. Those who lusted for possessions and power became men, and those who yearned for freedom became dragons and vanished from memory. But now the mythical creatures are back.

The Archmage Sparrowhawk travels the land trying to discover the reason behind the distortion in the world, and on his journey he meets a troubled young man named Arren, obviously running from something. In his possession is a sword forged by magic, and Sparrowhawk senses a potential in him. On their journey they encounter slavers, and Arren rescues a disfigured girl named Therru from a particularly vile Slaver named Hare. They find refuge with Therru's adoptive mother Tenar, and they learn that the imbalance in the world is due to Hare's employer, a wizard named Cob. Cob wants immortality, and doesn't care that he'll destroy the world in the process of achieving it. Sparrowhawk will need all the help he can get to defeat Cob, but Arren's past, the secret that he is running from, is just the sort of weakness that Cob can prey on. 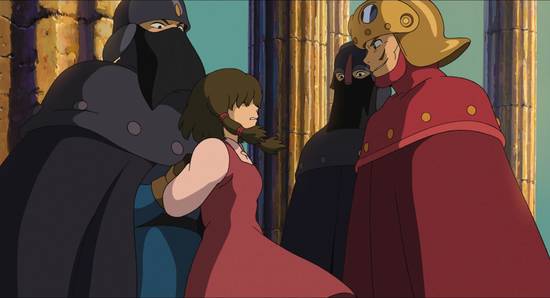 I have no nits whatsoever to pick with the 1.85:1 widescreen 1080p transfer on this Blu-ray. To my eyes it's a perfect transfer of a pristine image, bringing across the world of Earthsea, and the excellent theatrical level animation to astounding effect. Earthsea's world is rich, lush and rendered with a decidedly warm palette of colours. Detail levels are high, and there's no issue at all with digital artefacts. The film itself isn't exactly one that is too intricate or fussy, creating backgrounds that more resemble oil paintings than anything too realistic. The characters are pure Ghibli in style, and if I do have one, negative observation, it's that Arren and Therru were drawn too young for their apparent ages, while characters like Tenar and Hare seemed a little too familiar, as if I'd seen them in other Ghibli films but couldn't quite put my finger on which ones.

You have the choice between DTS-HD MA 6.1 Surround Japanese, with an optional translated English subtitle track, or the DTS-HD MA 5.1 Surround English dub. Both surround tracks are excellent when it comes to conveying the film's action, placing the effects around the soundstage, and making the most of the film's epic orchestral score, one well worth looking up the soundtrack CD for. I went with the original language track, and found it to be an agreeable enough experience, but not too special. Certainly I think the Japanese version is a little hampered by lacklustre voice performances for Arren, and especially the villain Cob. I sampled the English dub, and found it to be a significant improvement on the original language track, not least in the way that the dialogue flowed and the phrasing when compared to the subtitle translations. There's name recognition to be had with Timothy Dalton as Sparrowhawk, Willem Dafoe as Cob, and Cheech Marin as Hare, but Dafoe, while keeping the understated monotone of the Japanese Cob, also invests enough personality into the performance to hold the attention. I know the next time I watch this film; it will be with the English dub. 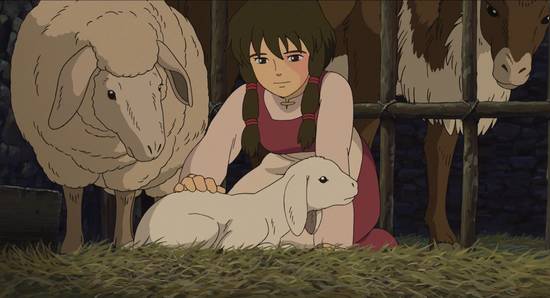 I just got the Blu-ray disc to examine, and can't comment on the packaging, or the DVD. The Blu-ray, apparently authored by Australia's Madman Entertainment, offers its options from an animated menu displaying stills from the film.

As in all of the Ghibli collection from StudioCanal, the feature disc comes with a storyboards option, which on the Blu-ray is implemented as a picture in picture affair, with the storyboards appearing in the bottom right hand corner of the screen during playback when selected.

The Birth Story of the Film Soundtrack lasts 60 minutes, and in this featurette the work of composer Tamiya Terashima is examined, as the documentary follows him on the process of creating the music for the film. It's an in depth documentary that goes into a lot of detail about the process, and has interviews with the director, producer, the composer, and some of the musicians involved. I was particularly interested in the obscure traditional instruments from around the world that were used in the music for the film.

The NTV Special lasts 44 minutes, and at first glance is the usual promo piece that accompanies a new film. A couple of TV show hosts interview the voice of Arren, Junichi Okada, and follow him on his first major voice acting job. It also looks at Aoi Teshima, the young singer whose singing voice got her cast as Therru in the film. It's your usual fluff piece of promotion, until it gets to new director Goro Miyazaki and his relationship with his father Hayao, and more particularly that relationship as it relates to the creation of this film. Fraught isn't the word. 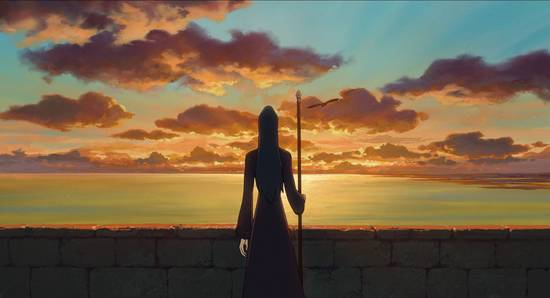 Behind The Microphone lasts 48 minutes, and this time focuses more on the ADR recording, offering interviews with the voice cast, with behind the scenes glimpses of them at work, and the occasional blooper.

Behind the Studio: Origins of Earthsea is a short promo piece from an English language perspective, with an interview with an animation historian, but the input from producer Toshio Suzuki is still subtitled.

The featurettes on this disc are presented at 720i resolution, but are obviously up-scaled from an SD source. The bright side is that the 720 resolution does allow for neater subtitles.

There are 90 seconds of TV spots for Tales of Earthsea, also at 720i resolution.

However, the 10 minutes worth of theatrical trailers for the film are presented at 1080p, as are the Ghibli Collection trailers for Arriety, Ponyo, Howl's Moving Castle, Spirited Away, Whisper of the Heart, and Nausicaa. 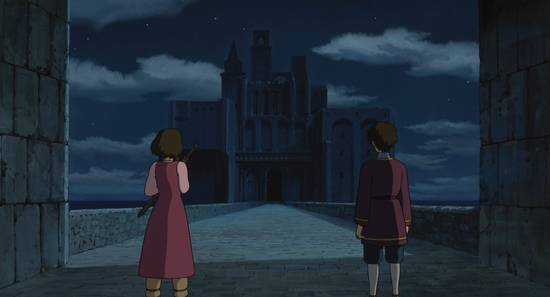 There's a good movie in here somewhere. It's just a shame that it doesn't make it to the screen. The artwork and the animation are excellent, the music soars and carries the story, but the problem is that the story doesn't go anywhere. Tales From Earthsea has an interesting premise, and appealing characters, but it fails to develop them. In the final analysis, this is the middle of a story, we get dumped into the narrative with little idea of what is going on, and we leave it before we have any idea of the repercussions of the events that occur. Quite frankly, the back-story promises to be more interesting, while there's a lingering feeling as the end credits roll that there's more good stuff ahead. Tales From Earthsea sets up its big reveal in the opening few minutes, and spends its time building, fairly mundanely towards that reveal. It's somewhat dispiriting that this revelation turns out to be a mirror of that from Spirited Away, which lessens the impact if you've seen the earlier film.

What Tales From Earthsea needed was a more focussed narrative, a better grip on the story that it wanted to tell. Instead it picks up ideas, toys with them, and then discards them, and the film never really gets any momentum. Right from the beginning, we're asking questions that the film fails to answer, what's the importance of dragons in this world, why does Arren act the way that he does, what's the relevance of the imbalance? By the time the narrative gets to address these questions, the film has long since lost the thread of their importance. 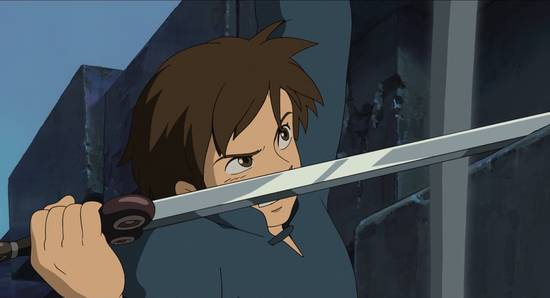 Adapting novels to the screen is a tricky business, very few of them fit easily, and most require that a lot of material be discarded, and the plots thinned down to that which would make most sense on screen. It also means reworking the narrative to flow better cinematically. I haven't read the Earthsea novels to compare, but my impression is that this adaptation process is where the film fell flat. It's as if the screenplay has cherry picked the wrong moments from the books. Too often the plot would be fumbled as the movie would go off on a tangent. There's a whole section where Arren and Sparrowhawk spend time working on Tenar's farm, and I was left wondering about the impending collapse of the world, and the crazy wizard looking for immortality vanishing from the protagonists' priorities.

Tales From Earthsea needed a cohesive plot, and it needed to better use its characters. It has an interesting premise, and it does get its act together to deliver on a rousing finale, but the journey there is a listless and wayward one, indicative of filmmakers indulging their whims. That Tales From Earthsea actually makes you interested in what happens before it starts, and also in what might transpire for its characters after the end credits roll is admirable, but it really also needed to make you care about what happens during the film as well. It's one of those films that aims astronomically high and falls flat in the attempt, which is worth appreciating.