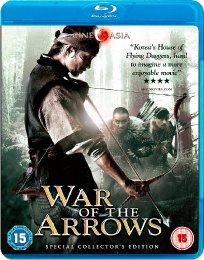 War of the Arrows (Blu-ray Details)

Blu-ray
Yamada: Way Of The Samurai

Review for War of the Arrows

When was the last time you saw a decent bow and arrow movie? I've thought as hard as I can, and can only come up with Robin Hood: Prince of Thieves, which is more indecent than decent, with its CGI arrow POVs, and arrows that fire two bows nonsense. Modern warfare and combat invariably boils down to guns and variations thereof, but when it comes to historical combat, you'll usually see the archers only as they unleash a sea of arrows at the start of a battle, while the actual meaty, character developmental stuff will be either sword-fighting, or it will be good old martial arts hand to hand combat. The personality of the archer rarely makes it onto screen. These characters are usually just there to add to the body count. What's ironic is that in history, the archer was the most important combatant on the battlefield; indeed the first Japanese Samurai during the Heian period were more likely to be archers on horseback, than they were sword-wielding foot soldiers. It's high time that these unsung warriors got some screen time to themselves. Fortunately, that's where the Korean movie War of the Arrows comes in, arriving in the UK on DVD and Blu-ray courtesy of Cine Asia. I get to look at the rather delectable Blu-ray for this review.

Brother and sister Nam-Yi and Ja-In had a traumatic childhood. The overthrow of the previous king meant that their family were marked as traitors and purged as a result. Their father's final words to Nam-Yi were that he should protect his sister until the end, his final gift, the bow whose inscription would come to inspire Nam-Yi's life. The two siblings managed to escape to the country, where they were taken in by their father's friend. 13 years later, Nam-Yi has grown up to be resentful, unruly, and un-ambitious. Not surprising when you consider that as the child of a traitor, he has no future in the country. He is though a highly skilled archer, and peerless as a hunter.

It's his awareness of his family's position that makes him reluctant to bless the wedding of his sister to their childhood friend, and he chooses to go hunting on that day. But all of that falls by the wayside when the forces of the Qing dynasty invade. The Chinese are ruthless and without mercy, tearing through the border villages with ferocious intensity, taking many prisoners, and killing all that are left behind. Nam-Yi races back to protect his sister, but he's too late. She and her new husband have been taken by the invaders, and are being marched, along with several other captives back to Manchuria. Joseon law is that anyone who crosses the border for whatever reason is considered a traitor. None of that matters to Nam-Yi, whose only goal is to rescue Ja-In. But he's just one man, against an entire army. To make matters worse, Ja-In catches the eye of the lecherous Manchu prince. If that wasn't bad enough, the prince's own elite archers are on Nam-Yi's tail.

There's an Islamic philosophy, that only God can attain perfection. For this reason, you'll find Islamic artists and artisans deliberately leaving a single flaw in their creations to pay tribute to the perfection of divinity. I feel that Cine Asia approach their Blu-ray releases with the same philosophy. War of the Arrows is nigh on perfect in high definition, save for a fraction of a second where the camera pans up to a patch of sky, and some digital banding becomes obvious. Other than that, there are no nits to pick with this transfer. The 1080p 2.35:1 widescreen image is breathtaking. The image is crystal clear throughout, bringing the detail, the colours, and vivid depth of the cinematic experience across to stunning effect. The film's astounding production design, the exquisite costume design gets the best possible treatment here, while the action is pretty amazing, although it does get bogged down with the odd lapse into shaky cam clichés.

You have the choice between DTS-HD MA 5.1 Surround Korean, and DD 2.0 Stereo in the same language, with optional English subtitles. I stuck with the DTS track for the duration, and was as happy as I could be with its great representation of the film's sound design, Action sequences are suitably dynamic, the quieter scenes impress with their subtlety, and the traditional styled music drives the pace of the film along well. The dialogue is clear throughout, while the subtitles are free of error and accurately timed.

The animated menu follows the usual format for Cine Asia discs, a bar of options at the top, with scenes from the film playing in the background.

On the disc, you'll find in the trailer gallery an HD presentation of the UK trailer, and the SD version of the International trailer. There are trailers for twelve other Cine Asia releases in another menu on the disc.

Under the extras menu, you'll find a couple of short featurettes presented in SD format. Behind The Scenes lasts 4 minutes, and offers soundbites from the cast and crew about the film. The Making Of lasts 8 minutes and is simply b-roll footage, some of it repeated from the Behind the Scenes featurette. The Showcase lasts 3 minutes and acts as an extended trailer.

This would be slim pickings, were it not for the Aiming for the Bullseye featurette. Subtitled An Interview with Director Kim Han-Min (Cine Asia Exclusive), this lasts 32 minutes, is presented in 1080p HD, and here the director speaks in depth about the film, the history that inspired it, the casting process and the actual making of the film.

Finally, there is the Bey Logan audio commentary, in which he tells us everything we need to know about the film, the actors, the story, the history, Korea, China, the secret of life, the universe and everything. Bey Logan commentaries are the best bit about the extra features on Cine Asia discs, and on occasion they can be better than the movie itself, and the one on War of the Arrows is no exception.

It's just like Titanic. No, don't run away. You see Titanic was a fictional love story set against the background of a genuine historic event. In the same way War of the Arrows is a nail-biting action movie set against the genuine events that took place in Korea at the start of the 17th Century. Here the overthrow of one king and the purge of nobles that accompanied it, followed sixteen years later by the second Manchurian invasion, and the capture of 500,000 Koreans, taken back across the border to be slaves for the nascent Qing dynasty, serve as the backdrop for one man's mission to rescue and protect his sister. It's also one of the best action movies I have seen in many an age, with engaging characters, a sharp story, plenty of twists and turns, and action sequences that had me on the edge of my seat. There are cliff-hangers aplenty in War of the Arrows, and thrilling set pieces with an eye to realism, that strongly contrasts the sort of action cinema that you usually see from places like Hong Kong.

It's hard to envisage just how exciting archery as presented in this film actually is. After all the weapon is practically silent, is used at a remove, and involves more stillness, patience and cunning than it does hyper-fast movement and kinetic violence. Perhaps the best analogy to the modern era would be a movie about snipers. Snipers operate at a distance, and when you get a movie about two snipers pitted against each other, it becomes a tactical chess game punctuated by intense moments of action, it becomes about the personalities, the psychological strengths and weaknesses of the combatants, and done well it can be gripping stuff indeed.

In War of the Arrows, Nam-Yi has grown up wedded to the bow. Despite his family being purged during the overthrow of the last king, despite his acceptance that his life will never be allowed to amount to much, he still takes on the last commandment of his father, shoulders his legacy, and becomes a skilled archer in order to protect his younger sister. But aside from his skill, he's pretty much grown up as a delinquent, and isn't too pleased when his sister decides to get married. All of these petty concerns are thrown aside when the Manchurians invade, slaughter his adoptive family, and kidnap his sister. Then it becomes all about finding and rescuing her. The thing is that the Manchurians are reputedly the best archers in the world. So instead of two snipers facing off against each other, it turns out to be Nam-Yi versus a whole army of snipers. To make matters worse, before he even learns of his sister's fate, he bumps into the invading Manchurian prince and his elite guard. So now, not only is he chasing after his kidnapped sister, he's pursued by the best archers in the Manchurian army. It's the ultimate chase movie.

War of the Arrows is brilliant stuff. I was hooked from beginning to end. It's got it all, drama, comedy, plenty of action. It has scenery chewing villains, charismatic heroes, its combat action sequences are stunningly well choreographed, and I was glued to the screen. Hollywood can only dream of making action cinema this engrossing. I can't recommend War of the Arrows enough.

I've just thought of another decent movie about archery. It's also a Korean movie called The Bow, although it's more of an art house piece, as far from an action movie as you can get.