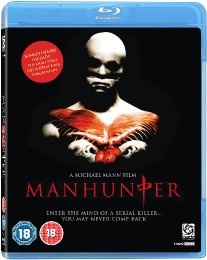 Blu-ray
The Day of the Triffids
Related Articles

In 1991 Silence Of The Lambs stunned the world, and entered into the consciousness of a generation of movie-goers, many of whom would have ordinarily dismissed and showed disdain for the horror genre. But Jonathan Demme's thriller was essentially a glossy fright-flick, a serial killer chiller before such a thing became in vogue, executed to spectacular effect. Prior to this seminal work though, the iconic figure of Hannibal Lecter had already blitzed our screens, in a much quieter fashion, but equally influential, as Dr. Hannibal Lecktor.

In 1986, Michael Mann tackled the Thomas Harris novel, "Red Dragon", in his commercial disappointment, Manhunter. The story follows retired FBI profiler, Will Graham, who is called back into action in order to find an unidentified serial killer, nicknamed "The Tooth Fairy", before he commits his next crime. In attempting to solve this mystery, Graham interviews Dr. Lecktor, a killer himself whom Graham was attacked by while investigating his crimes. The incident led to a breakdown for the G-Man, which ensures that throughout this case, his immediate superior, Jack Crawford, must aid Graham in not relapsing. As they struggle to uncover their killer's identity, Graham becomes more and more drawn into his profiling work, and deeper into the mire…

The film did not do particularly well upon it's release. Perhaps cynical due to Mann's executive producer role on the Miami Vice television show, critics sneered at the incredibly stylish manner in which Manhunter was shot, labelling it a "style over substance" effort. Audiences seemed to agree, and the movie did not recoup it's budget. A wider release became troublesome thanks to difficulties for the distributor (Dino Di Laurentiis' company endured a tumultuous mid-Eighties), while the home video release of the film saw different cuts of the work end up on our screens. Manhunter turned up on DVD in various incarnations over the years, though this reviewer first caught it on television as a teenager, and instantly recognized it as an unforgettable film. Now, years on, it sill thrills, excites and frightens, in equal measure.

Manhunter's palette is cool, icy, and alienating. Happily, the transfer is superb, fully exposing the blues and whites that wash over the scenery to stunning effect. Mann's considered, cold and intimidating framing has also never looked cleaner than it does here.

Details are also visible on this blu-ray that were previously much more difficult to pick up on before. When Francis waits outside his lover's home to surprise her, her porch is illuminated in a jarring fashion, that adds to a lovely visual cue to his psychosis. Such impassive, detached framing and lighting techniques are understandably a tough ask for some. Used to more conventional thriller trimmings, some audience members struggle with this touches and find them, well… rather naff.

Likewise, the music; an electro-rock-synth dreamscape that tends to split viewers down the middle. The Prime Movers and Iron Butterfly are certainly not for all tastes, with the latter particularly proving to be marmite in the film's imposing climax.

But for fans, Manhunter's reflective, introspective and thoughtful approach is the key to it's success. It's certainly stylish and assured, but at the same time, it's far from a loud or brash film. The story is carefully crafted, and provides a group of extremely absorbing characters. Dollarhyde himself is utterly fascinating, arguably a creation of society, a victim on one hand, but also a reprehensible figure. But even he seeks redemption and nearly earns it. Additionally, the film has long been underappreciated for it's originality in depending so largely upon a police procedural structure. It's obsessed with forensics, and as Mann himself has stated, he's one of the first people to really acknowledge the work of profilers in such popular culture, basing a film around one. In some ways, Manhunter even recalls the sometimes tacky, police-procedure-heavy Giallo films that came from Italy in the Seventies, such as What Have They Done To Your Daughters by Massimo Dallamano. Dallamano's "poliziotteschi" /Giallo amalgamation may nor be as accomplished as Manhunter, but like many of its contemporaries, it's similarly focused on the investigative details, on carefully arranged, sometimes beautiful shots, and a contrasting, daunting soundtrack. Like much of his output though, Manhunter is too easily dismissed as overly detached and clinical. It's not. The depth and subtle detailing in the characters is tremendous, and their motives are as three-dimensional as any others in cinema, they just so coolly essayed because their roles in the overall picture demand it. If the lead character of Will Graham was a bombastic, smart-talking loud-mouth, his internal struggle, and his worrying connection to those whom he hunts would be almost comical.

Manhunter's sleek, distant visual technique is also reflected in the strong performance of Will Peterson, who plays Graham with steely resolve. During Graham's visit with Lecktor, in which he attempts to get back into the mind-set, Lecktor insinuates that they are alike in thought processes, and thus the appropriation is that there is a dark, killer instinct lurking within Graham. Peterson's performance is largely subtle, but there are indications of this frightening depth throughout. Clearly, he was an underrated performer, prior to his CSI run, and any suggestion (as several critics did at the time) that he was less than up to the task, I cannot agree with.

Those who enjoyed Hannibal and Red Dragon may find Manhunter somewhat disappointing, and the biggest stumbling block for some has always been the presence of Brian Cox as Lecktor rather than Anthony Hopkins. This is a very different picture though from those pretenders, and Cox's turn couldn't be more appropriate. While Hopkins was also splendid (and certainly Oscar worthy) in Silence of the Lambs, his turn in Hannibal was much more camp and bordered on parody. Cox is the antithesis of this, in his calm, analytical. His menacing calm is much more understated than the majority of Lecktor fans would be accustomed to.

Joan Allen and Tom Noonan are the real standouts though, delivered deeply layered supporting roles that drive the second half of the picture. Noonan is authentically terrifying as Francis Dollarhyde, but amazingly unearths some pathos in his tender relationship with Reba.
Across the board though, the cast are terrific, a staple of Mann's work. He really does appear to extract (however much of an ordeal it proves to be!) hidden depths from all his performers. Dennis Farina exhibits the same hard-boiled compassion and understanding that made his Michael Torrello so admirable in Mann's creation, Crime Story. His role is much smaller than that of the epic Torrello though: he's confined to providing direction and discipline for Will Graham, which he does so with his trademark believability.
The real surprise is Stephen Lang (Col. Quaritch in Avatar). Another refugee from Crime Story, Lang made his name in the television series essaying the idealistic and determined, yet ingenious and street-wise David Abrams. Here, he's a contemptible reporter- a genuine leech of a being, and every pore just oozes that odorous stench. The two characters could not be more different.


Manhunter is available here in two versions, the original theatrical cut, and Mann's Director Cut. Mann's Director's Cut also has an optional Director's Commentary. The Commentary is an essential aspect, as it gives a little background behind the added/cut material ,some of which is of a far inferior standard to the remainder of the transfer. They've remastered what they could, but quality varies. The Theatrical Version remains the far superior finished film though in any case, for my liking.

Disappointingly, this "anniversary edition" offers nothing new in the way of documentaries. What is included, are two short features that were both present on the previous Momentum release, and the trailer for the film.
Inside Manhunter may be only seventeen minutes long, but it's filled with superb anecdotes from all of the principle cast members, bar Dennis Farina. Cox in particular is a fantastic voice: a really well spoke actor, who isn't dry, nor does he descend into nauseating fawning. This guy could talk for hours without being anything less than compelling. The notoriously feisty Tom Noonan even contributes, providing an amusing note about his audition and the distance he kept from the other cast members during shooting. What really becomes apparent, is that this is collective of actors with incredible, distinctive voices. It may not be immediately apparent in the film, but their vocal work brings a vast range of emotion, and it's easy to understand why Mann was so enamoured with his group of stars (Mann would work repeatedly with Farina, Noonan would show up again in Heat, Bill Smitrovich and Stephen Lang were principles in Crime Story). Through the course of this little retrospective, there is a brief allusion to the fact that professionals working in the field of forensics and the like, found Manhunter a film they could really relate to. More on this topic would have been really welcome. The other piece, is a ten-minute discussion with Cinematographer, Dante Spinotti, that really helps bring to light some of technical decisions in the film. Obviously, Mann and Spinotti were a wonderful combination, who continued to collaborate to even greater effect, so it's nice to have at least a little brief insight into their relationship.

Studio Canal's new Anniversary Edition of Manhunter then, is a flawed package, though more so for fans who already own the previous DVD editions. Further, new contributions from Michael Mann would have been much welcomed in the documentary stakes particularly. But with that said, it's still the best release available by some margin.
However, these are minor quibbles, because what is present on this Blu-Ray, is cracking stuff. Most importantly, the film itself is a seminal, thrilling picture, and unquestionably deserves it's revaluated status as a modern classic.