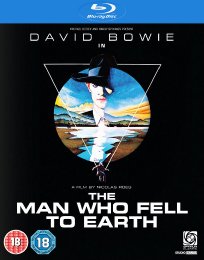 The Man Who Fell to Earth (Blu-ray Details)

DVD
The Man Who Fell to Earth - 40th Anniversary Edition

The Man Who Fell to Earth

I've been a fan of Nicolas Roeg's work since the very first time I saw Don't Look Now and have been buying and watching more and more of his films since then with my favourites including the aforementioned psychological horror film, the beautifully ethereal and meditative Walkabout and the wonderfully trippy psychological thriller Performance. A film that (to my eternal shame) I had only seen once, despite splashing out for the Criterion Collection version, was the science fiction film The Man Who Fell to Earth, based on the novel by Walter Tevis and featuring David Bowie in the lead role. Prior to writing this review, I made amends by watching the film twice and it won't be long until I watch it again and then revisit the commentary.

In an area in the middle of nowhere, a man in a hooded jacket navigates his way down a hill of loose stones and begins walking around in the black desert beneath it, all the while watched by a man in a suit and wearing sunglasses. We don't know who is who, when or where this is set or what is happening. The next thing we see is the same strange man lying on the bench outside a pawnbrokers and, as soon as it opened, he enters and sells his wedding ring. We quickly learn that it isn't his wedding ring as he has a huge collection of them and clearly plans on doing this over and over again to raise some money.

Now with enough cash to hire a patent lawyer for some considerable time, the man, Newton, asks the lawyer, Oliver Farnsworth,, if he could look over some designs. Having seemingly spent all night looking over the drawings and notes, Farnsworth tells Newton that it could be worth $300 million but, rather than looking extremely happy, Newton replies that 'it's not enough'. He won't say why it's not enough or what he would need such a vast sum of money for, but continues to produce designs for things that prove extraordinarily popular and is soon earning money from books, cameras, TV sets and just about everything as you could imagine.

As a bit of a recluse, Newton is often on the move, conducting business affairs via the telephone in his limousine and putting Farnsworth as the public face of his company, World Enterprises. All this time, Thomas Jerome Newton is harbouring a huge secret: he is an alien from the planet, Anthea, which is in desperate need of water and Newton has left his family behind to travel to Earth, a place known in his language as 'The Water Planet' to find a way of transporting people from his home planet to Earth.

As World Enterprises Corporation expands, Newton recruits a physics professor, Dr. Nathan Bryce, to help with the more complicated side of his space exploration program. After a while, Bryce and Farnsworth begin suspecting there is something extremely strange about Newton that can't be explained away. However, Newton has revealed his true identity to Mary-Lou, a downtrodden maid/bellhop/dogsbody that he met in a hotel in New Mexico when she cared for him after he collapsed in an elevator. As a stranger to Earth's customs, Mary-Lou has introduced Newton to things like television, alcohol, church and sex and, because of his vast intellect, Newton is able to watch numerous TV sets at the same time, absorbing all the information. Soon, television and alcohol begin taking over his life, dulling his sharpness, paranoia and ambition.

Not only are Bryce and Farnsworth suspicious of Newton, but the FBI have him under surveillance and it isn't long before the feds close in and Newton is taken in for examination before he can take his spaceship on its maiden voyage.

Nic Roeg is a director who doesn't always spell everything out for the audience, choosing to leave many things and said and for the viewers to interpret themselves, thus making his films challenging and more interesting than those where everything is laid out for you with characters spouting dialogue full of exposition. This works perfectly for The Man Who Fell to Earth as it doesn't follow the book exactly, leaving the Icarus metaphor in the background and leaving him to work out various character's motives and allegiances that the audience to work out.

This is a film with almost perfect casting and, at the time, it may have seemed a little odd to give David Bowie the lead role but it turns out to be utterly inspired. If, in 1976, you needed anyone to play an alien who was struggling to come to terms with Earth's norms, cultures and methods of interaction, it would probably be Ziggy Stardust! With his different coloured eyes (the result of being stabbed in the eye with a compass when at school), streaked red and blonde hair and otherworldly demeanour, Bowie is utterly compelling and believable as someone who has just landed on this planet. In the other roles, Rip Torn is brilliant as Dr. Bryce, Candy Clark utterly plausible as Mary-Lou and Buck Henry gives a stellar performance as Oliver V. Farnsworth.

Paul Mayersberg's screenplay is a faithful adaptation of the novel, taking everything that is relevant whilst leaving the more esoteric elements as subplots that are there if you want to see them but may not resonate with viewers who haven't read Walter Tevis' book. I'm not sure whether the screenplay was adapted by Roeg or whether Mayersberg tailored his screenplay to suit Roeg's directorial style but, either way, it feels very much like 'Un film de Nicolas Roeg'. Watching this again made me wonder why I haven't seen it more often yet plot lines, character arcs and the narrative structure came flooding back, as well as parts of the novel (which I haven't read in years). It is an exceptionally well made film with great performances from the entire cast, some truly haunting imagery and magnificent direction by Roeg.

Extra Features
I was half expecting a disc to be jam packed of extra features, some ported straight from the Criterion Collection DVD, but was quite surprised to find just two selections available on the menu. Before you get to the main menu, there are skippable trailers for the StudioCanal Collection and Peeping Tom.

Interviews with Cast and Crew takes you to a submenu with five different selections so you can hear from Nic Roeg (33:28), cinematographer Tony Richmond (21:48), Paul Mayersberg (31:50), Candy Clark (27:46) and an audio interview with Walter Tevis (4:10)). Apart from the interviews with Roeg and Tevis, the others are brand new and exclusive to this release. Together, you have nearly 2 hours of interview material and they are extremely revealing and a fascinating listen as they provide information on how the project came about, the casting process and the shoot itself.

Watching the Alien (24:27, SD) is a very well put together and interesting documentary containing interviews footage with Candy Clark, producer Si Litvinov, Nic Roeg, cinematographer Tony Richmond, editor Graeme Clifford and production designer Bryan Eatwell. If there wasn't enough information from the interviews, this is an equally revealing and well put together piece that gives you masses of information about the film. It isn't new and has been ported over from the Anchor Bay DVD from 2003.

Rounding off the set is the trailer.

The Picture
To refresh my memory, I had a quick look at the DVD after watching this disc and then put the BD back in to compare the two and see whether the picture was as good as I thought it was or whether it would be compatible to an upscaled DVD. It isn't, as the picture is much clearer with better colours and contrast levels and, with 1080p definition, it really is a great deal better than the (already excellent) Criterion Collection DVD.

Nic Roeg has always been a visual director whose sense of framing, composition and lighting means that he is sometimes a second director of photography on set. The Man Who Fell to Earth is no different as, with cinematographer Anthony B. Richmond, everything is meticulously shot and looks as if it has been carefully planned and photographed by someone on the top of his game.

When it comes to the alien effects, the SFX make-up is extremely impressive, not only for a film now 35 years old, but would still look the part if it had been made in the last few years.

The Sound
If there had been a DTS-HD Master Audio 5.1 track, I would have sampled it out of interest but always returned to the stereo option. This disc only comes with LPCM 2.0 stereo which is extremely crisp, presenting the dialogue, score and sound effects and beautifully without any hint of hiss or crackling. There aren't many scenes where rear surrounds would come into play as, for the most part, this is a dialogue driven film concentrating on the characters and their interactions with one another.

When it comes to the score, the composition by John Phillips and Stomu Yamashta has a wonderfully ethereal element that emphasises the alien scenes whilst underscoring the mystery and suspenseful parts of the film superbly. Other parts are quite grounded, showing how mundane Newton's life has become when he's living on television and alcohol.

Final Thoughts
The Man Who Fell to Earth is probably not the most accessible science fiction film you will ever come across, nor is it the most accessible of Nicolas Roeg's films. It is, however, a terrific piece of filmmaking with a standout performance by David Bowie at its centre. I intend to watch it a few more times in the next couple of weeks, both on this disc and on the DVD with the commentary as watching it again yesterday made me realise what a brilliant film it is and why you need to watch it at least twice to get the most out of the film.

Despite the nearly 3 hours of extra features, I don't think this will ever replace the Criterion Collection DVD set, which has a commentary and more supplementary material as well as coming with the original novel. However, fans of the film who already own that DVD set and want to watch The Man Who Fell to Earth with the best possible AV quality should definitely look into buying this Blu-ray. This will also be a disc that those who own one of the older releases or who have yet to see the film but are curious about what it is like should seriously consider.