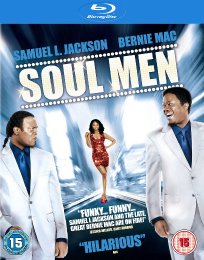 There is never a good time for someone to die but it must be extremely inopportune when it happens during or just after shooting a film. Sometimes you can work your way around it as Terry Gilliam did following Heath Ledger's death midway through shooting The Imaginarium of Dr Parnassus but when two of the actors in your film, both big names, die after shooting and just when you want to begin promoting the film, you are caught between a rock and a hard place.

This happened to director Malcolm D. Lee when he had finished his new film, Soul Men, only to have two of the big names: Isaac Hayes and Bernie Mac pass away within two days of each other in unrelated incidents. Apparently the film was re-edited to give it a very different feel and have the end credits as a farewell to both actors. 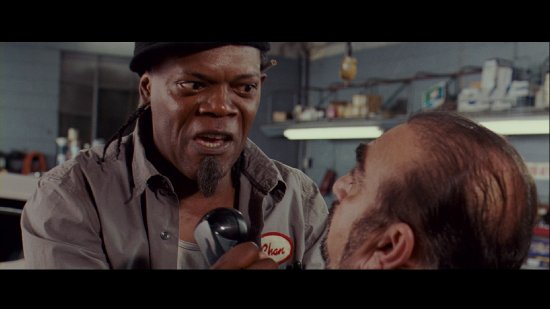 The film centres around Louis Hinds and Floyd Henderson who were collectively known as 'The Real Deal' as they were backing singers for Marcus Hooks, who decided to pursue a solo career which saw him inducted into the music Hall of Fame whilst Louis and Floyd drifted into obscurity. Floyd managed to make a lot of money by opening a chain of car wash franchises whilst Louis became an introverted and philosophical ex-con who works a low-paid job at a garage. Neither had spoken to one another in 20 years because Floyd married the woman who Louis was dating who then quickly left him. With a false hip, Floyd had been put into a retirement home by his family so when the call came from VH1 to participate in a memorial concert for the late Marcus Hooks, he went knocking on Louis' door only to be rebuffed at every turn.

Telling his ex-bandmate that VH1 will pay them $40,000 to appear, Louis agrees as long as the money is split 60-40 in his favour and that they travel across the country from Los Angeles to New York by car because he doesn't fly. What follows is a clichéd ridden journey across the US as the two ex-bandmates grow to know each other and call in on Floyd's ex-wife, Odetta, who, unbeknownst to the two men, has died from cancer leaving behind a daughter, Cleo, with a beautiful singing voice but is in an abusive relationship with a wannabe rapper. Needless to say, she joins them and proves to be an intrinsic part of the former duo, now trio, whilst Floyd works out whether or not to tell her he is her father, and if he decides to go for it, how to do so. Louis drives a vintage American convertible (an El Dorado) which is pretty much obligatory for a road movie as the vehicle has to be recognisable and the scenes with the roof down allows the camera to film the actors without worrying too much about the angles or reflections in the other windows. 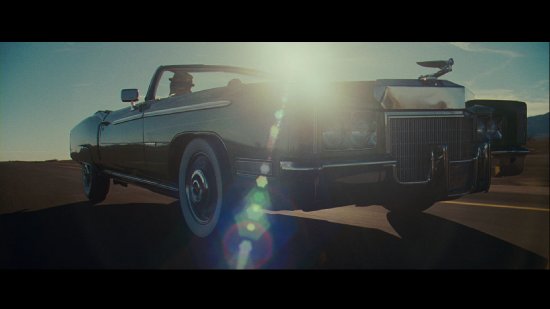 This is one of those films where you know everything is going to resolve itself in the end of the question is how they get from step A to step B and how well their performance will go down with the police desperate to arrest them. In many ways, Soul Men is similar to The Blues Brothers except the emphasis is more on drama than comedy with the laughs coming out of situations rather than witty one-liners and the premise, with a mismatched couple on one journey together, is very similar to Planes, Trains and Automobiles except it all takes place in one vehicle. This makes the casting of Bernie Mac and Samuel L. Jackson particularly puzzling as Jackson has never been a man renowned for his appearance as an actor with a number of comedic leading roles (although he can be very funny and his delivery of serious lines) and Bernie Mac was generally considered a comedic actor rather than a dramatic one. Also, neither are renowned for their ability to sing or dance! 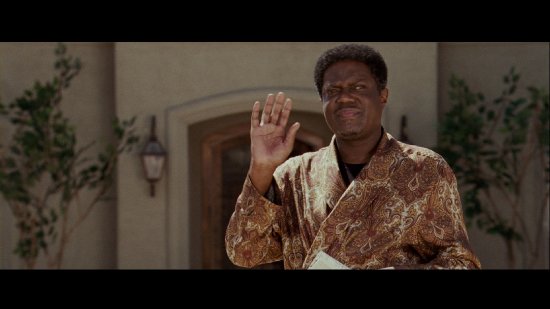 When I watched the film, I was expecting it to be an all-out comedy so was bemused by the lack of laughs and sat stone faced through the entire thing. There are a couple of moments which are designed to be funny but I found the comedy to be much too broad and telegraphed to elicit a single giggle or snort of amusement from me, but I may be in the minority and other viewers may find it extremely funny, charming and touching -- things that I did not find in the film. If you find the idea of Floyd (Bernie Mac) do a TV commercial advertising a complete car wash with special attention to the wheels necessitating repeated use of the phrase "rim job" as something that would make you laugh, then this may be the film for you. 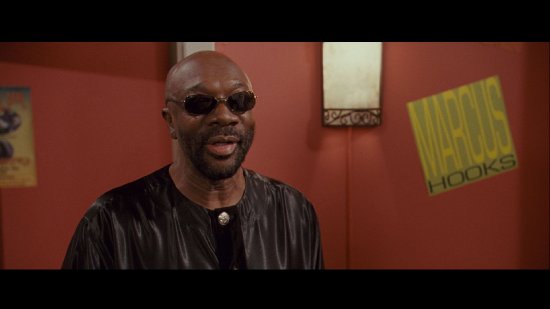 Slightly disappointingly, there is no commentary or any lengthy featurettes of note so all that comes under the 'Bonus' heading are:

Deleted Scenes (9:43, SD) which vary in quality and would have changed the tone of certain sections, particularly involving Bernie Mac. There are 16 scenes which can be viewed independently or together using the Play All function.

Director Malcolm Lee (2:50, SD) is really a puff piece about the director with members of the cast and crew saying what a great filmmaker he is and what a joy it was to work with him. I imagine the interviews where people said he wasn't particularly talented and they fought like cats and dogs all the way through the shoot were omitted from this section!

The Soul Men: Bernie Mac & Samuel L. Jackson (9:30, SD) looks at the two actors and the reason why they play off each other so well, with Jackson as the straight man allowing Mac to go for the gags. Needless to say, the contributors are extremely complementary about both men and you have Bernie Mac talking about his role and approach to comedy whereas Jackson talks about their background together as to unknown actors hanging out. 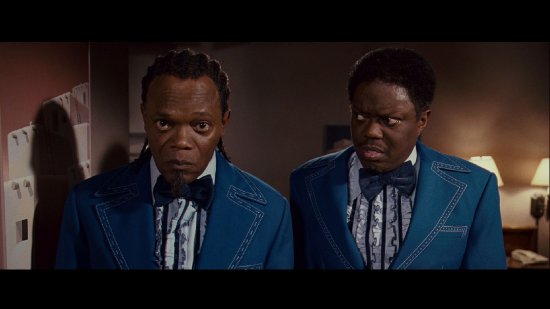 A Tribute to Isaac Hayes (4:03, SD) is, as the title suggests, a look back at the legendary musician and actor and what a joy he wants to work with and why he will be so missed.

The Cast of Soul Men (7:42, SD) goes through the supporting cast from Sharon Leal to Sean Hayes, Adam Hershman and Affion Crockett with other members of the cast and crew singing their praises.

A Tribute to Bernie Mac (7:27, SD) is basically the same as the tribute to Isaac Hayes except members of the cast and crew talk about Bernie Mac instead, with a couple of interview clips from the man himself.

Bernie Mac at the Apollo (4:17, SD) concentrates on the time in between performances when Bernie Mac kept the extras entertained by doing several impromptu stand-up routines at the venue in Louisiana, the longest of which runs during the end credits.

Boogie Ain't Nuttin' (But Gettin' down) Behind the Scenes (2:31, SD) is basically footage of the recording session of Bernie Mac and Sam Jackson singing the song which they perform on stage when they were basically lip syncing to a song they had already recorded, a little like some bestselling artists on stage! 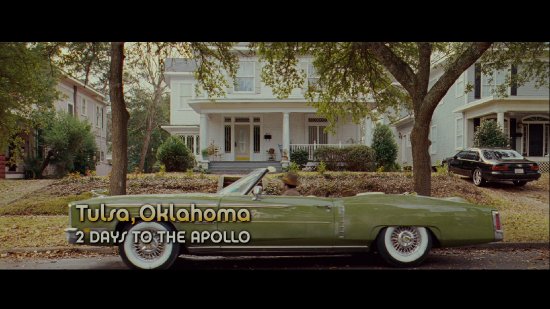 The Picture
Considering the film is now 2 ½ years old and was never theatrically screened in the UK, this will be most people's first chance to see the film and it does look very good with excellent skin tones, contrast levels and colours in the 1080p transfer. Director Malcolm D. Lee doesn't have as much talent as his world-renowned cousin Spike, but the film is very well made with decent cinematography and is well edited.

There are a few scenes when it is very obvious that the car is not on a freeway where it claims to be on the map as the rear projection/CGI is clearly fake but I'm not sure whether this was intentional or not as Lee doesn't mention it in any of the featurettes. 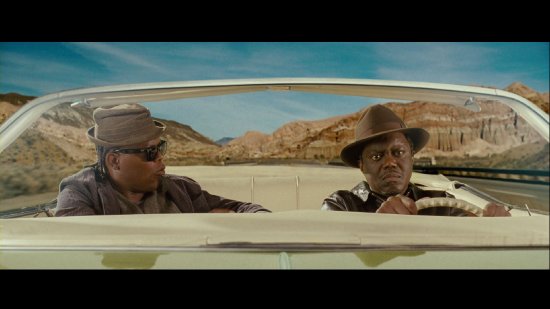 The Sound
Sadly, there are no HD soundtracks so you only have the option of Dolby Digital 5.1 or 2.0 stereo. The former presents the dialogue clearly enough and does a good job with the music which features heavily throughout the film even when there are no performances. The stereo does a decent enough job but doesn't have the bass or the impact of the 5.1 track when it comes to the live performances.

There is a very nice selection of R&B and Soul music throughout the film from a variety of different artists and, when 'The Real Deal' appear onstage you can clearly hear that it is Bernie Mac and Samuel L. Jackson singing. 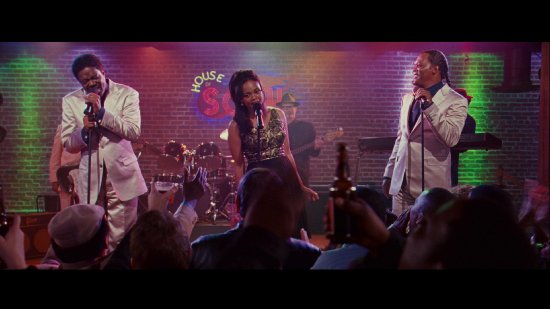 Final Thoughts
I expected to find Soul Men to be a lot funnier than I did, largely because I was expecting a comedy rather than a drama-comedy. Even so, I could tell when there was a supposedly amusing scene and it did nothing for me or the two people who watched it with me. Bernie Mac fans will no doubt want to watch this as a 'farewell' and he (rather prophetically) takes the opportunity to say goodbye. Whether you find this a fitting farewell or not will will largely depend on your appreciation of broad comedy and situations involving bodily fluids and sex scenes. There are a few touching moment but nowhere near as many as I expect from a film like this.

The disc isn't bad but the lack of a high definition soundtrack is a negative, as is the rather perfunctory and repetitive nature of the extra features which are far from stellar and comprehensive. A rental is probably the best way to go unless you are a massive Bernie Mac fan and want to own the last film he ever made.