Will Success Spoil Rock Hunter?: The Masters of Cinema Series 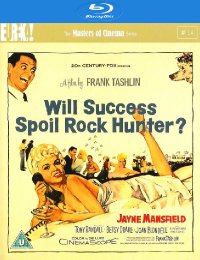 Synopsis:
Unsold on celebrity? Congested with consumption? Addled by status? You're in The World, kiddo, brought to you by Frank Tashlin - "Because Someone's Got to Live in It' And now a brief word on our latest fine product, the one that gives you the answer to that nagging question: Will Success Spoil Rock Hunter?

Ladies and gentlemen, no-one does straight-and-narrow quite like Tony Randall, and we guarantee his turn as lovable ad-man Rockwell P Hunter will leave you in so many stitches you'll be just silly with sc-HAH-rtissue! And speaking of tissue: once you see Jayne Mansfield bob and weave as starlet Rita Marlowe, the ambidextrous angel who takes Hunter under her "wings" to launch his agency into the $trato$phere, you too will coo her trademark "ooo"! But that's not all! You'll also get Ms. Joan Blondell, star of Nightmare Alley and of Opening Night, who rounds out the package as Ms. Marlowe's assistant and handler -- as they say in Paris, quel package!

proves that love CAN be manufactured (how else could we get our Blu-rays in your hands??), and finds Frank Tashlin doing what he did better than everyone else: frank tashlin

Special Features:
• Gorgeous high-definition transfer of the film in its original 2.35:1 aspect ratio
• New and exclusive video introduction of the film by director Joe Dante (Gremlins 1 & 2, InnerSpace, Looney Tunes: Back in Action, The Hole 3-D)
• Vintage Movietone short which captures Jayne Mansfield on tour promoting the film
• Alternate music & effects track with a different musical score for the opening of the picture and other 'temporary' effects-placement
• Original theatrical trailer
• Optional English SDH subtitles for the deaf and hearing-impaired
• 44-page booklet featuring two new essays by film writer David Cairns, and an exclusive 2003 interview about the film with Tony Randall, conducted by Ethan DeSeife