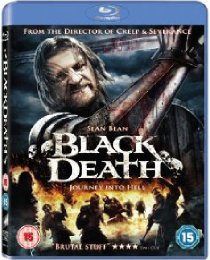 It's 1348 and the pestilience known as The Black Death is sweeping across Medieval England's green and pleasant lands, leaving swathes of the population dead or infected. Amidst this chaos is a a young monk named Osmund (Eddie Redmayne) who is torn in his holy vows between following God or his forbidden love for childhood friend Averilla (Kimberley Nixon). The plague has reached the village and monastery where Osmund has Averilla hidden away but he fears for her health and persuades her to leave for the nearby Forests of Dentwich, promising that he will find a way to meet up with her. Osmund prays to God for a sign of what he should do and it seems his prayers are answered rather quickly.

Out of the mist rides a knight on a holy mission. Ulric (Sean Bean) has been tasked by a Bishop to seek out a nearby remote village within the marshes to check on rumours that the villagers have done a deal with the devil and been spared God's wrath and the deadly plague. The local Cardinal (David Warner) is loath to release any of his monks, but Osmund thinks his prayers have been answered and seizes his chance to leave, he has local knowledge of the forest and swamp as he has there there all his life. And so Osmund and Ulric ride off together...

It's not long before the true intent of the mission becomes clear. Ulric leads a motley crew of fellow soldiers and mercenaries whose mission is to capture a necromancer and deliver him/her to the Bishop is a nice little medieval caged contraption that includes spikes and other assorted torturous instruments. Osmund is a little ignorant of this type of creature, so Ulric's number two Wolfstan (John Lynch) shares his knowledge; a necromancer is someone who can bring the dead back to life.

After resting for the night in the forest, Osmund sneaks away during early morning to find Averill but only discovers bloody clothing and a gang of thieves who chase him back to the camp. A savage battle ensues and the survivors make their way across the swamp to the village, run by Hob (Tim McInnery) and Langiva (Carice Van Houten). The visitors are made welcome, but Ulric is suspicious of the clean surroundings and little sign of pestilence...

Picture is nice and clear with a little well placed grain where required.  The locations are fantastic and some of the German scenery is breathtaking and a joy to behold on film.  There's a particular rock formation that has to be seen to be believed, really impressive, even though it's only on camera for about a minute or so.  And yes, I did say that this was filmed in Germany...

A small but neat set of extras, all in standard definition, including director's commentary, behind the scenes footage and cast/crew interviews.

The Black Death, or Bubonic Plague, was one of the deadliest pandemics in human history. Causing large black swellings on the body, thought to be caused by fleas living on rats, the plague peaked in Europe between 1348 and 1350 with an estimated 30-60% of the population being killed by the pestilence. The dreadful impact of the plague led many people to question religion, as well as having both social and economic impacts that would become more obvious once the outbreak had passed. The Church, and therefore most people, believed that the plague was sent by God as punishment for sins and therefore anyone suspected of witchcraft was tried and killed.

This film by the director of Severance and Creep is a rather ambiguous film, particularly on moral grounds. On the face of it, it's simply a 'man on a mission' film with Sean Bean's knight on a mission from God, or as near to God as he can get. Ulric is a fundamentalist, truly believing that what he has been told is right and therefore despite what he sees in the field, he refuses to think about or deviate from his mission orders. Bean plays his part to perfection, almost a Christian Boromir if you will, and he really suits this kind of role. Eddie Redmayne's Osmund is rather a weak and naive boy whose transformation in the end is quite superb and a little unexpected, something to think about when considering how some people arrive at their destinations. Other than John Lynch's Wolfstan, the other members of the fighting party are essentially cannon fodder.

The village led by Hob and Langiva looks like a utopia of kindness but proves that it is quite clearly not. Forsaking God, the villagers follow their own rules led by a woman (during a time when women in particular were being slaughtered after accusations of witchcraft and not high in the social rankings) and are more than happy to defend their way of life. Not evil in the traditional sense, the villagers see it more as defending their way of life in the same way that Ulric and his mates see their mission, albeit both sets of characters acting quite savagely as per the times. There is even a twist on the witchcraft element of the story, which is good as it grounds the story firmly on terra nova rather than the supernatural, and the effect that this has had on both the villagers in terms of control and pliability and the intruders to the village, especially Osmund.

Director Christopher Smith doesn't really take sides on the moral rightness of either side, just allows the story to play out with the viewer discovering just how human and grounded the story is and discovering that that are serious flaws on both sides and that ultimately there are no winners. I'll be honest, I wasn't expecting to be impressed as I thought this was going to go all supernatural demon on me but the storytelling and the moral ambiguity makes for a quite impressive film with a most unexpected ending (twice).