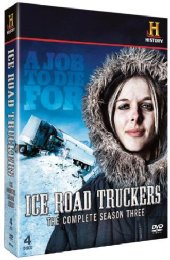 Blu-ray
Is the Order a Rabbit? Season 2
Related Articles

"They have no idea" - A standard reality show phrase, which one of the drivers Alex actually says in this series.

Ok, I will be the first to admit, I have a bit of a bee in my bonnet (as it were) over reality television, of which Ice Road Truckers is now part of its oeuvre. Now, I am scrutinising all these shows within an inch of their life. This is not an attack of Ice Road Truckers per se but a look at a genre, which may be fatally flawed.

Kenworth, H.G.V Class 1 & 2, Peterbilt, Optimus (Convoy) Prime, and Duel, if those words mean anything to you this may be the show for you. It is a simple concept as most reality shows are; a group of truck drivers drive across roads built of ice in Alaska, to drop their cargo to its destination, if only it was as simple as the idea.

The show follows a group of drivers from older guys close to retirement, former extreme sports competitors and everything in between. I thought I'd root (or should that be route) for Tim Freeman Junior, a rookie driver who's Dad is a truck driver, and tells him to not mess up, which is kind of like me but without the ability to drive a truck, plus he's a smoker, what's not to like.

Now as the good Doctor (who) say's humans always see pattern's in stuff that aren't there, but this show is packed with Bond references, deliberate or not they are everywhere . They drive Kenworth trucks the same as Sanchez is Licence to Kill, the road they drive on is the Dalton Highway, the James Dalton highway no less, one shot in the show was through the barrel of a gun, and a person on the show actually says drive another day at one point, the Bond film Die Another Day features a massive chase on ice.

After my meandering review, I'll bring it back on course much like the characters on the show do with their trucks, now for a reality show just how much of this is real? To be fair it seems genuine and I hate to bring a piece of creativity down for the sake of it, but I heck I enjoyed it. Sure it's not perfect, there's just the right amount of standard jeopardy (at least years ago they had the common decency to name a show just that) and the standard filmed after the fact P.O.V shots, plus it earns extra points for having an opening sequence, and it puts me in mind to of one of the most underrated reality shows "Britain's Worst Weather".

If it's real then I'd like them to say, if it's scripted then that's fine too I just get narked by the term reality, when in all possibility it probably isn't, but if you can let that slide, no pun indented then you'll probably enjoy it, just one thing though why do the History Channel fund this?

Disc: Beautiful! Shocking to think this looks better than some feature films, "Made in Dagenham" to cite a specific example, easy to navigate menus, and the option to just play ever episode on the disc brilliant for bank holidays or when you need to get over an hangover.

Special Features: Just under 30 minutes of bonus footage in standard definition and letterboxed, and subtitles, if you are hungry for more footage you'll lap it up.

Verdict: As `reality` shows go it's probably up there with the best of them, in fact it's probably one of the best, if you catch one episode you'll know if you want to watch it or not, there's not much middle ground to be honest.