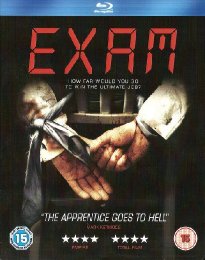 I remember a bit of Internet buzz about Exam at the end of 2009 and hoped it would have a reasonably sized theatrical release so I could see it in the cinema but this wasn't to be and it's limited theatrical run didn't come anywhere near me. I'm therefore extremely grateful I live in a world in which the home cinema market is so big and not 50 years ago when you either saw a film at the cinema or not at all.

This directorial debut feature by writer/director Stuart Hazeldine (who is best known as a writer) has drawn comparisons with some fairly lofty films and other small a well-respected cult movies including 12 Angry Men, The Usual Suspects, Saw and Cube. The premise is ridiculously simple: at an undefined point in the future, eight people go for a job examination for what they hope to be will be the best career they will ever have. All eight are shown into a room which is featureless apart from some lights, some CCTV cameras, eight tables and chairs, a black screen at the front which appears to be a one-way mirror and a small timer box under the screen. On each table lies a pencil and a piece of paper which says 'Candidate 1' or 'Candidate 2', right up to 'Candidate 8'. 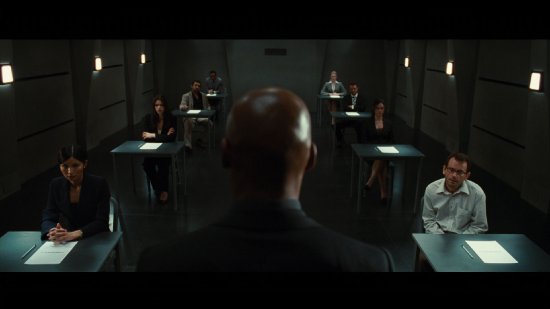 One guy, a gobby Southerner, realising they haven't been forbidden to speak, takes charge and says that they shouldn't use names so gives everyone the nickname based on some personal trait, so he is 'White' as he is Caucasian, the Asian bloke next to him he called 'Brown', the black guy is called 'Black' and the four women are addressed by either their skin colour, as in the case of 'Chinese' or their hair colour, from 'Blonde' to 'Brunette' and 'Dark'. For the bespectacled man with the butterfly stitch over a cut on his eyebrow who has yet to open his mouth, White gives him the moniker 'Deaf'. 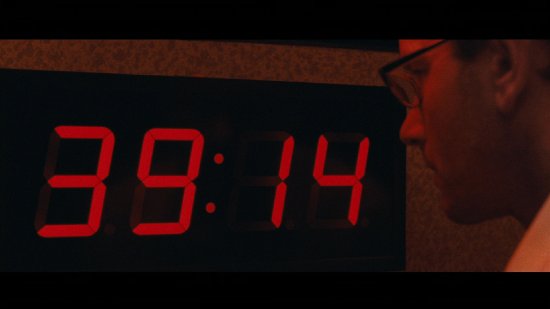 As the Invigilator didn't say anything about not standing up or walking around, they feel free to do so but their numbers were almost immediately down to seven when one woman begins to write why she deserves to have the job on her piece of paper and is forcibly ejected by the armed guard. As there doesn't appear to be a question on the paper, various suggestions are bandied around including whether it could only be seen in a certain light, so they hold the exam papers up to the fluorescent lights on the wall and, when this doesn't work, one notices that there are emergency lights, so they smash all the lights which causes different lights to come on. However, this comes to naught when no question is revealed. As the clock keeps ticking down, the tensions gradually rise and the numbers gradually shrink and eventually, and almost inevitably, some of them turn to physical violence.

For a film that did have some hype and a extremely warm reception on the Festival circuit, I was expecting a well written, well directed and well acted movie and this didn't disappoint on any front. Aside from Jimi Mistry (Brown) and Colin Salmon (Invigilator), the only other actor I recognised was Luke Mably (who plays White) who was one of the soldiers in Danny Boyle's 28 Days Later. 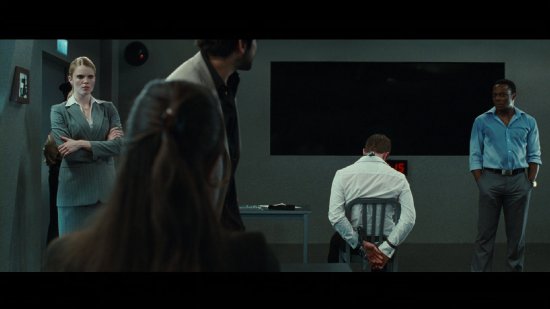 Although this does seem a little weird, it seems entirely plausible that a massive organisation with an extremely secretive CEO, whose very existence is a mystery to the extent that he is almost an 'Oz' figure to the extent that almost no one knows what he looks like. When the eight candidates are told that the outside rules don't apply and only the company's rules are in effect in that room, you quite believe him as even a murder would be quite easily hushed up.

Stuart Hazeldine does a terrific job of gradually escalating the tension, removing candidates at fairly regular intervals and having the characters do what normal people would, try to keep as much information about themselves private but, as time goes on, more and more information is divulged either because it happens naturally conversation or because someone forces out of them. This is an extremely well made movie from a first-time director and although you may feel that you've guessed something (and even if you are correct as I was on one major point) it doesn't actually mean anything until you get to the very end and we find out both what the question and answer are.

Extra Features
The commentary, with Stuart Hazeldine and editor Mark Talbot-Butler, is very interesting and packed full of information about the casting, the shooting process and when CGI was used. A commentary like this could quite easily become a 'love in' where they are both very complimentary about each other's work and describe how each actor was a joy to work with but this isn't the case and it is full of information about how difficult it was to shoot the infrared sequence, characterise different characters with no real names and what they think about reaction to the ending.

The Behind the Scenes featurette is only brief at six minutes and concentrates on two scenes. This shows Stuart Haseldine giving direction and the whole crew in action whilst the actors do their thing.

There are a selection of interviews, the first is with director Stuart Haseldine and only lasts for a few minutes but some of it takes place in his office and the rest on set. In this, he talks about where the idea came from, working to a small budget and juggling different roles. The second is with director of photography Tim Wooster lasts just over a minute and he talks about the difficulties of filming a large number of people whilst keeping them all individually lit. It seems that just as he was getting going, the interview finished. Thirdly, producer Gareth Unwin talks for (again) just over a minute about what attracted him to the project -- the answer is Hazeldine's writing credentials and he is rather abruptly cut off at the end.

Finally, there are a selection of interviews with several cast members: Jimi Mistry, Nathalie Cox, Chuk Iwuji, John Lloyd Fillingham, Pollyanna McIntosh and Colin Salmon. In total, these run at just under a quarter of an hour but have been rather badly put together so the sound levels aren't that clear and, for some reason, you can't hear the beginning of each answer.

In addition, there is a photo gallery and the theatrical trailer. 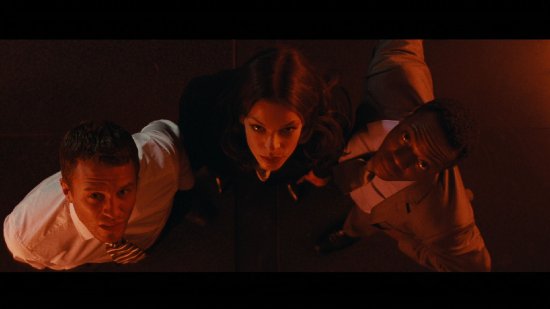 The Picture
A beautifully sharp and very well defined 1080i picture with terrific lighting and a growing sense of claustrophobia thanks to the single location and shifting light sources, from normal light to UV, infrared and then a more general light source at the end. There is something very strange that takes place in the film becomes more claustrophobic when there are less people in the room as, by then, the egos are larger and the characters have become more comfortable in their environment, which becomes a character in itself, so move around a lot more than in the beginning when they stayed fairly close to their own desk.

It is odd that this should only be in 1080i rather than 1080p but, as much of the film is shot with very static cameras with no fast-moving scenes and only once, and very briefly, moves to handheld, this isn't a problem in the slightest and I would defy anyone to tell the difference. 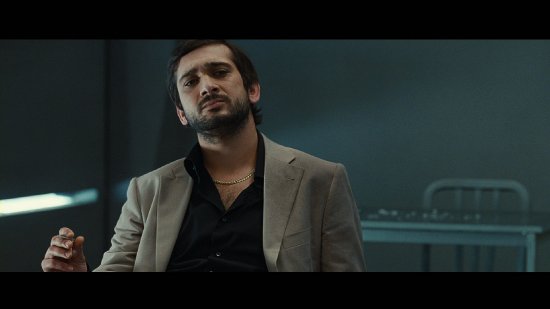 The Sound
Sadly, there is no HD soundtrack but the Dolby Digital 5.1 surround track does a tremendous job with the dialogue and ambient sounds. The film is predominantly front loaded and dialogue dominated so what you really want is a audio track that will present the dialogue clearly so you don't need to strain your hearing, resort to subtitles or turn the volume up so it is uncomfortably loud. Fortunately, the DD 5.1 delivers on all counts.

The score, by Stephen Barton and Matthew Cracknell is very good and helps to underscore the more poignant moments and ramp up the tension in the more tense and suspenseful scenes.

In addition to the DD 5.1 surround track, there is a DD 2.0 stereo option which is pretty good but you do lose some of the ambient sounds and the score which helps build tension and suspense so this is a little lightweight. 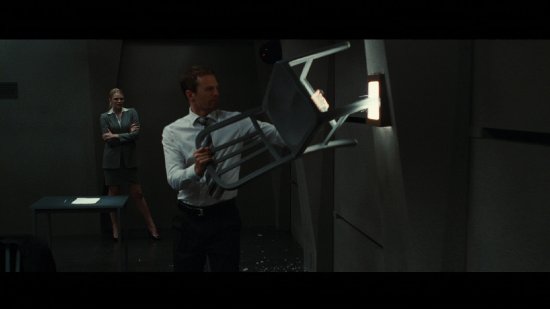 Final Thoughts
Exam is a very well made and acted film that could easily work as a stage play as it is confined to one location and is very much a character piece as you learn more about each character as the film unfolds and are very much kept in the dark, just like the characters, until the very end. It is a very taut psychological thriller that becomes increasingly tense as it progresses. As a directorial debut, it is an extremely impressive one and marks Stuart Hazeldine as a name to watch. If this is what he can do with a limited budget and a cast of largely unknown actors, if he was given 10 times that money and a cast of real quality actors (that's not to say there's anything wrong with this cast) then I imagine he could make something even more impressive.