The Go-Between
Review added by
David Simpson
Places to Buy 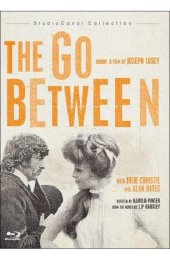 Synopsis:
Christie stars as Marian, sister to Marcus and about to be engaged to Hugh (Edward Fox), a good-natured Viscount and her perfect match. During the course of summer, 1900, 13-year-old Leo comes to stay at the Norfolk stately home of his classmate Marcus, and is soon befriended by Marian. Initially ignorant of the implications, Leo agrees to carry messages between Marian and her neighbour, the eminently unsuitable local farmer Ted Burgess (Alan Bates). As the oppressive heat intensifies, so do Leo's questions about the laws of attraction and love... and as his childhood innocence is threatened, so is the fragile web of relationships so recently forged over the course of this summer's passions, deceptions and revelations... Adapted from the classic novel by LP Hartley by Harold Pinter, this was his third collaboration with director Joseph Losey, and won him a BAFTA for Best Screenplay. Also a BAFTA winner for Best Actress, the film also stars Michael Redgrave.