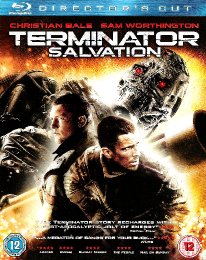 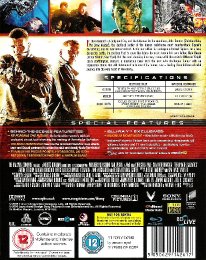 The Terminator franchise began in 1984 when the machines dispatched a T-800 cyborg to kill Sarah Connor before she could give birth to John Connor, the future leader of the human resistance.  As this failed, another Terminator was sent to kill the teenage John Connor and, again, he survived. However, the prophesised Judgement Day, when the Skynet computer system would become self-aware and trigger Armageddon, still took place and Connor survived to fulfil his destiny.

Terminator Salvation takes advantage of the time travel rules in which there are numerous possible futures and that the slightest change in the past can have massive implications for the future, so virtually ignores the events in Terminator 3.  The year is 2018 and John Connor is an influential and well liked soldier in the human resistance, extremely capable and charismatic, but disliked by the human command which is conducting operations from a submarine so the machines can't find them.  The resistance believes that Skynet broadcasts a signal which, if interrupted, could shut down the machines and end the war.  On a mission, John Connor finds plans that Skynet are developing a new cyborg that resembles a human, the T-800, alongside the specific signal frequency. 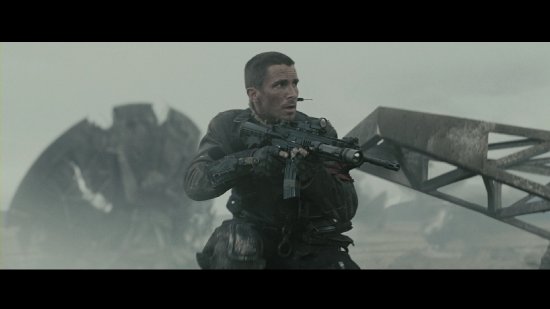 A prologue in 2003 shows Marcus Wright, a convicted murderer on death row who, following his execution, will leave his body to Cyberdyne Systems for scientific research.  Fifteen years later, he awakens naked and covered in mud with no recollection of where he is or how he got there but hasn't aged a day in the interim period.  Rescued from a Terminator by Kyle Reese, a teenage member of the resistance and the two quickly become friends.  When Kyle is kidnapped by a Skynet Harvester, Marcus sets out after and finds one of Connor's trusted lieutenants, Blair, who had been shot down trying to stop the Harvester and is dangling from her parachute.

Believing the harvested humans are going to be used in the T-800 project, Blair takes Marcus to meet Connor but he is injured by a magnetic mine on the way which reveals to Connor and his resistance group that Marcus is a cyborg despite firmly believing he is human.  The Resistance command has ordered a strike on the very facility that Kyle has been taken to which Connor is unable to delay or stop.  He therefore has to trust Marcus in an attempt to save Kyle and, with him, his own past. 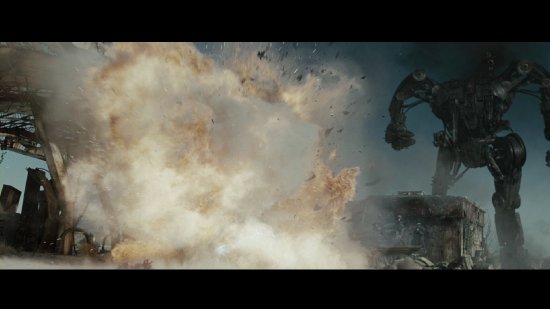 As with the Alien series of films, I firmly believe that the first is the best, the second is an inferior, but still very good, action-oriented film with the last two instalments huge let-downs.  No one will dispute that The Terminator or T2: Judgement Day are sci-fi classics but there will be few that defend Terminator 3 or Terminator Salvation to the death.  A major problem with this is the director, no less a talent than McG who seems to have a good creative mind but, when it comes to directing, is pretty much untested with only the abysmal Charlie's Angels films to his name.

Christian Bale is an extremely solid and gritty presence as John Connor and Sam Worthington impresses as Marcus but the script is nowhere near as tight or innovative as it should be, getting bogged down and over complicated.  McG isn't a skilled enough director to overcome shortcomings on the script front so the film suffers.  However, it is an extremely impressive visual experience with some remarkable effects, both CG and visual, and the general look of the post-apocalypse future impresses.  There are a host of good actors around, with Michael Ironside as the General commanding the resistance, Bryce Dallas Howard (who is much better than the films in which she has chosen to appear, The Village, Lady in the Water and Spider-Man 3!) and Helena Bonham Carter, who plays the cancer-stricken doctor who persuades Marcus to donate his body to science.

Terminator Salvation is not a dreadful film despite its many shortcomings and is a perfectly acceptable piece of enjoyable popcorn entertainment.  It is a fairly well executed action film which moves at a relentless pace but isn't a patch on James Cameron's first two films.

Extra Features
Exclusive to the Blu-ray are two interactive features which are definitely the way to watch the supplementary material.  The Maximum Movie Mode begins with an introduction from McG who explains how it works and all of the featurettes, storyboards and deleted scenes are incorporated into this interactive system.  You can leave the film to play and see clips of the featurettes but, by selecting them, you leave the film and watch the whole piece before returning to where you left off.  Every so often, the film will split as McG takes to the stage in front of two screens with the film running on the left and behind the scenes or deleted footage on the right with the director pausing and resuming the feature to talk you through how certain parts were made.

This is an interesting alternative to a commentary that could have been fantastic if it weren't for McG.  He is so wrapped up in how good he thinks the film is that he only points out a couple of shortcomings and things he would have liked to do better and, sadly, there is no mention of Christian Bale's famous expletive-filled on-set outburst. 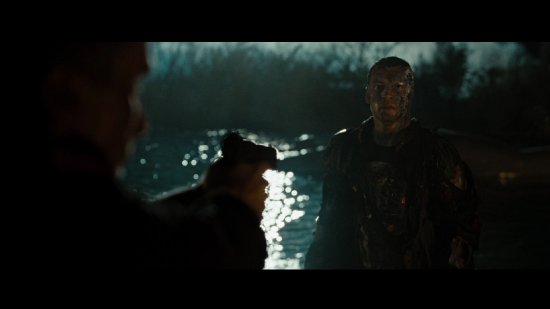 The three featurettes are well worth watching, though they do duplicate some material, looking at the visual effects, in particular the T-800, Moto-Terminators and Hydrobots, the new and inventive additions to Skynet's army.  There's not much in the way of cast interviews, but there is plenty of behind the scenes footage and a good tour of the Stan Winston studios.

The disc makes the most of BD-Live, so often just used for trailers and other nonsense that wastes your time, as it includes 10 videos.  There are also some trailers and a CineChat option that allows you to talk to friends whilst watching the same film though why you'd want to do this is beyond me. 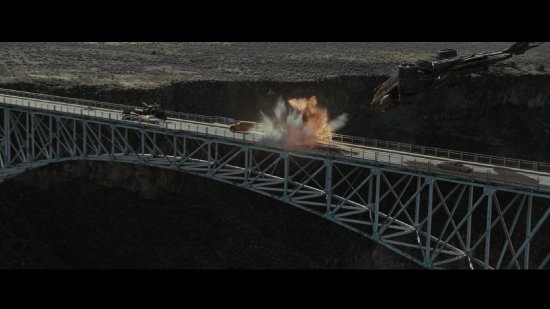 The Picture
This is a mightily impressive visual experience, especially with the 1080p/24fps picture that Blu-ray allows.  The production design and work by the art departments are first rate and the washed out, grim palette perfectly suits the post-apocalyptic setting.  The film uses green screen very well, creating believable backdrops and seamless effects.  The Moto-Terminators look and behave like robotic bikes and the Hydrobots are suitably menacing.

There is a fine layer of grain that is obviously intentional and adds to the desolate look of a dystopian future.

The Sound
Befitting a film of this nature is a suitably bombastic DTS-HD Master Audio soundtrack which presents the dialogue and score superbly but sends vibrations around the house when the action starts and the explosions and gunfire rock the soundstage. 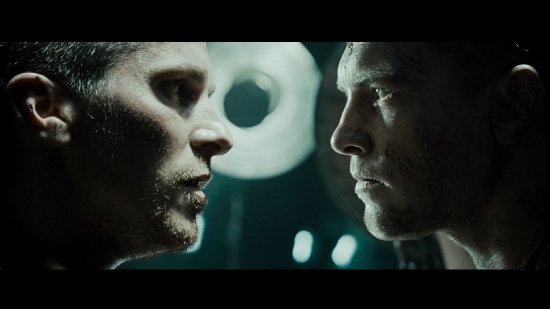 Final Thoughts
Terminator Salvation isn't, if you pardon the pun, the franchise's salvation as it is a fairly brainless action movie that does struggle with the Terminator timeline, but does introduce the genesis of the T-800 that tried to kill Sarah Connor in 1984.  One can reasonably argue that there are myriad timelines and that this doesn't need to follow straight on from either Terminator 3 or Terminator: The Sarah Connor Chronicles as each leaves their own timestamp and changes the future.

If you want an unchallenging action film looks and sounds great and moves along at a fair old lick then this is a fantastic disc, but if you are after something that faithfully follows James Cameron's vision and lives up to the promise of his films, then this isn't it.