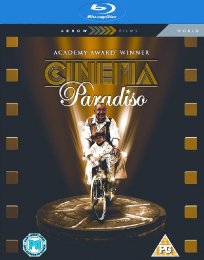 Synopsis:
An internationally famous film director, Salvatore, returns home to the Sicilian village where he grew up to attend the funeral of Alfredo, his old friend, mentor and father figure who was the projectionist at the local cinema throughout Salvatore's childhood. The visit, his first in 30 years, sparks sentimental memories, both good and bad, of friendship, his discovery of the joys of cinema, and of his first love, the beautiful Elena. As Salvatore reminisces about the highs and lows that shaped his life, he begins to reconnect with the community he left behind.

A charming and heart-warming tale of life's many passions seen through the eyes of a young boy and the man he becomes, CINEMA PARADISO has touched audiences the world over. Expertly and lovingly directed by Giuseppe Tornatore (Malèna; The Legend of 1900), the film features perfectly judged performances by Jacques Perrin (The Brotherhood Of The Wolf; Everybody's Fine) as the adult Salvatore, Philippe Noiret (Il Postino) as Alfredo, and Marco Leonardi (Texas Rangers; The Stendhal Syndrome; Like Water For Chocolate) and Salvatore Cascio (The Pope Must Die; Everybody's Fine) as the teenage and pre-adolescent Salvatore, respectively.