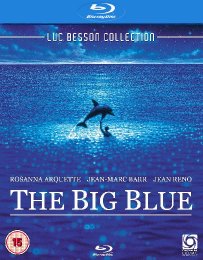 Long before Luc Besson practically gave up directing and spent his days producing and writing, he was one of the most exciting filmmakers to come out of Europe in a long time.  He arguably came to worldwide attention with Léon but had a minor hit with Nikita and the celebrated Le dernier combat (which won him a César for best debut feature).  The Big Blue was his first English language film with regular collaborator Jean Reno teaming up with Jean-Marc Barr in a cast headed by Rosanna Arquette.

Reno and Barr play Enzo Molinari and Jacques Mayol, two men who have been rivals since they were young boys who both had a passion for diving, something at which they were extremely skilled.  As adults, they trade world free diving championships and records whilst using their skills to travel the world and see incredible sights.  American insurance investigator Johana travels to Peru as part of an assignment and sees the amazing sight of a man dive under the ice on an Andean lake and stay underwater for an incredible amount of time.  Since their brief meeting, she became obsessed with Jacques and, learning he was going to compete in Sicily, lies to her boss about a document possibly being fraud and having Cosa Nostra involvement to get a free ticket across the Atlantic. 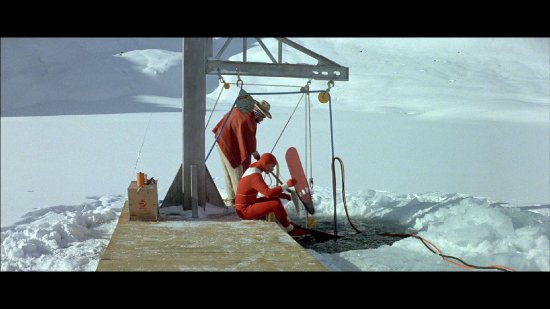 The film is basically a love triangle between Jacques, Johana and the sea with Enzo as Jacques' roguish rival who needs him to compete.  Reno is perfect as Enzo, a man who doesn't mind bending the rules, using his own incredible abilities for financial gain but who is married to the sea and can't hold down a steady relationship with anyone else.  Jean-Marc Barr is impossibly handsome and has a close relationship with dolphins to the extent that, after sleeping with Johana, he doesn't stay in bed whilst she is asleep but steals down to the ocean to spend the whole time playing with his dolphin friends.  Johana is the least interesting character as she is in love with Jacques but is always unsure about whether to commit and some scenes between them feel tacked on, rather than organic and intrinsic to the story.

The Big Blue is all about visuals with some startling underwater photography and amazing footage of the two men free diving - there are no body doubles or trick photography used as both men underwent training to dive to quite a depth, enabling Besson to get the shots needed for the characters without endangering the actors.  The film isn't as narratively strong as Léon or Nikita but is more aesthetically interesting and the lengthy shoot is an exhaustive worldwide trip to various diving locations. 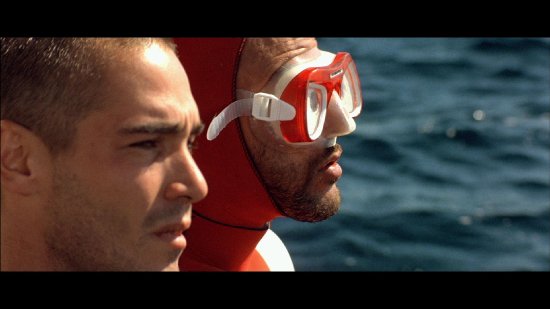 A tribute to the real life feats of free divers Jacques Mayol and Enzo Maiorca, The Big Blue is a meditative piece on the nature of humanity with both men, especially Mayol, thinking there is more to life below the surface with the real life Mayol philosophising on the nature of man and its aquatic origins.  Jean-Marc Barr has the expressions and body language of someone perhaps more suited to life in the water and looks very at home in all of the underwater shots, extremely relaxed and comfortable, which is needed to portray Mayol.  His rivalry and friendship with Enzo drives the narrative and you know that there is going to be a tragic outcome, but don't know what it will be.

I found The Big Blue to be both beautiful and infuriating as sometimes the contemplative nature of life on our planet got a little much and I wasn't entirely convinced by the subplot with Johana.  However it is such as glorious film to watch with incredible visuals and diving sequences that, every time they went underwater, all my reservations went away.

The odd thing about the disc is the sole option of the PCM French soundtrack where the actors are obviously being dubbed as you can see their lips speaking English!  As this is known as Besson's first English-language film I can't understand why there isn't the original English soundtrack.

Extra Features
Apart from the English and French trailers, the sole extra is L'Aventure du Grand Bleu which is a 97 minute making of/behind the scenes French feature which follows the lengthy shooting schedule with plenty of b-roll footage and voiceover from the actors and director.  It is very interesting and shows you everything you want to know about the shooting process.

The default setting is for the 168 minute director's cut but you can choose the shorter (137 minute) theatrical cut in the extras menu. 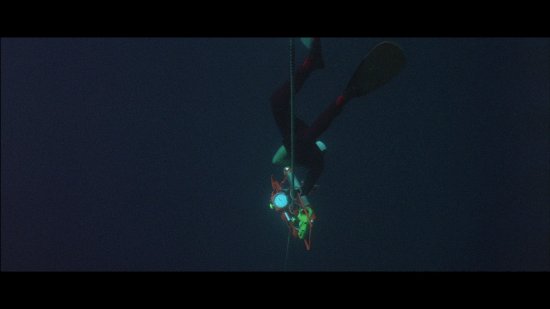 The Picture
For a film that is so dependent on the visuals, I expected a transfer to do the much vaunted photography justice and wasn't disappointed.  The 1080p picture is glorious with only a few wide shots having a little noise.  The underwater shots look incredible and, for a film just over 20 years old, it doesn't look anything like that age.

The camera work is quite brilliant with a great deal of planning obviously having gone into the underwater shots which are incredibly tense and I found myself holding my breath on more than one occasion.

The Sound
This is a confusing section as, according to DVD Compare, just about every version previously released has both the English and French dub but this only contains the French dub track.  For a film generally publicised as "Besson's first English Language production" (to quote the Optimum Website!), the omission of the original soundtrack is not only slightly annoying but extremely puzzling.

I had no complaints about watching the film in French as both Jean Reno and Jean-Marc Barr are French so this language choice should make sense but doesn't when both are speaking English!

However, the LPCM track is beautifully clear and the subtitling is superb.  Long time Besson collaborator Eric Serra provided the wonderfully haunting and emotive score that is worth a listen by itself - with Pro Logic II the rears are used to good effect in the underwater scenes. 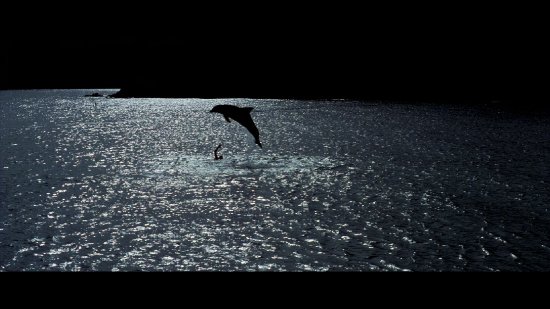 Final Thoughts
The Big Blue is not my favourite Luc Besson film but it is probably his most ambitious and personal directorial outing and is a marvellous accomplishment.  It is not a film for those wanting action and frequent drama - Léon and Nikita will suit those needs - but it is a beautiful and haunting meditation on the nature of life which, despite its flaws, is still an extraordinary watch.  This is going to be much more visually spectacular than any DVD but the single language track is confusing to say the least though, if you don't mind subtitles or speak fluent French, this shouldn't put you off.