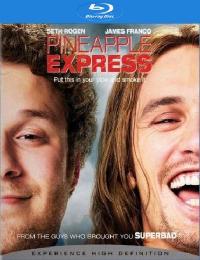 Pineapple Express is the latest of the Judd Apatow conveyor belt, following, most recently, The 40 Year Old Virgin, Knocked Up and Superbad. It was on the set of the last of these that Apatow and Seth Rogen thought about making a stoner action movie and it was something that Apatow had had in mind for nearly a decade. Rogen reckons that there was less than 3 weeks between wrapping on Superbad and starting filming on Pineapple Express to the extent that the two blur into one.

Providing a concise and informative synopsis for a stoner movie is almost an exercise in futility but, here goes. Dale Denton (Rogen) is a stoner and notice server, delivering subpoenas in disguise whilst listening to talk radio and getting high. He calls in at his dealer's apartment to see Saul (James Franco), where he tries out the titular strain of marijuana and buys a quarter and then sets off to serve Ted (Gary Cole). Enjoying a joint outside Ted's house, a cop car pulls up behind him and Dale watches a cop go into Ted's house where the two murder someone. High and terrified, he throws his roach out the window and, in a cack handed fashion, drives away. Ted and Carol (the cop) seeing Dale flee, run out and finding the roach, Ted takes a drag and identifies it as Pineapple Express, his new strain which can be easily traced.

Dale hot-foots it back to Saul's, telling him what he's seen and that his blunt will be traced back to Saul so, in a drug addled panic, the two of them go on the run, hiding out in the forest until they think it's safe to contact Saul's dealer Red (Danny McBride) to see if the weed has been traced to them. Before they know it, they're in the middle of a drug war between Ted and some Asian mobsters and Dale has a very upset girlfriend to deal with. 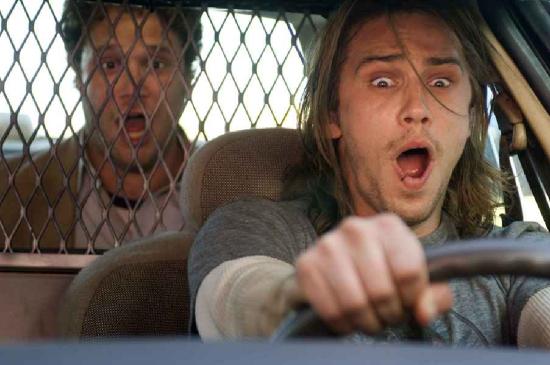 This has an excellent picture with some terrific stunts: a great fight scene in Red's apartment, a car chase and a shootout in a barn full of pot. The action sequences are done very well and the film, whilst not driven by the visuals, benefits from the added clarity of high definition. 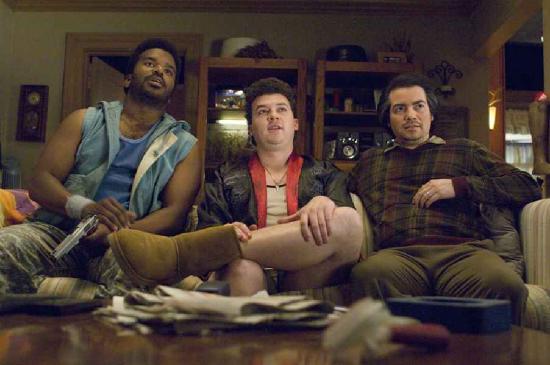 Oddly for a BD this is pretty short on the audio options with just an English Dolby TrueHD track and an audio descriptive track; there's also only English and Hindi subtitles. The soundtrack is clear and bassy when it needs to be, the surrounds and sub are used well in the action sequences and there's a pretty decent selection of music running throughout the film. 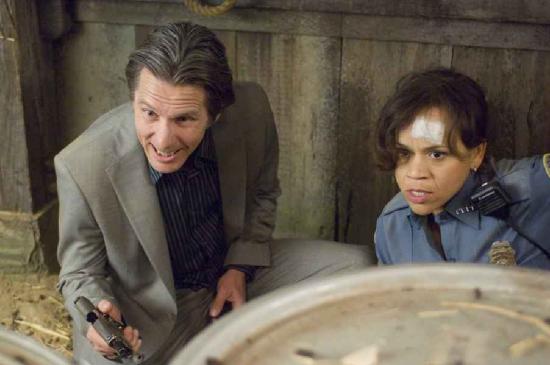 The first thing worth mentioning about this disc is the inclusion of both the theatrical and extended cuts so you get to see things that were cut out to get the 15 certificate in Britain plus some sound effects removed for the theatrical run.

The commentary is dominated by Rogen and Apatow, though there are others involved such as James Franco, Rosie Perez and Ed Begley Jr. (who has to leave about 10 minutes in). They sum it up pretty well at the end by saying "If you're not high, you just wasted two hours because there's no way that was interesting". They might have started by saying this because I wasn't high, didn't enjoy it and could have spent that time doing something else.

There are several deleted and extended/alternate scenes which are fairly amusing as they show the cast improvising and are oddly funnier than the same scenes once they have been cut down and put into the film. There are also several features in the same category: Item 9; Saul's Apartment; Red and Jessica's Guide to Marriage and Raw Footage which show the show extra footage that didn't make it into the film and some that was filmed just for laughs; some of these include Justin Long who's obviously a friend of Rogen having appeared with him in Zack and Miri Make a Porno.

There are two Making Of featurettes, one covering the shoot in general and another concentrating on the action, the wirework and car stunts. These are fairly interesting and worth a look. Complementing the latter is Injury Report in which the cast show off their war wounds, plus the Stuntmaster Ken featurette which is a made for laughs piece where Ken Jeong pretends to be the stunt co-ordinator and members of the cast and crew say how great he is. This later piece is almost pointless as it's neither funny nor informative. 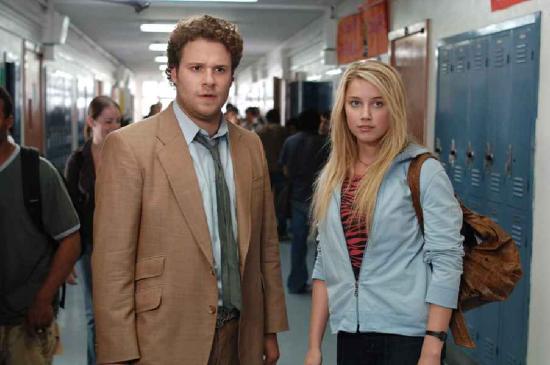 Before Amber Heard was cast as Dale's girlfriend, Seth Rogen did his telephone scenes with Judd Apatow on the other end and Phone Booth shows the two main scenes where he's talking to her from a public phone.

Line-o-Rama and Direct-o-Rama comprise b-roll footage with memorable quotes and David Gordon Green giving increasingly more weird and silly direction to the actors. There are also two pieces showing a Rehearsal and a Table Read; these are notable as they show how much the finished film differs from the script and rehearsals. You also get the Comic-con Panel in which the cast and crew talk about the film and do what they do on panels at conventions.

One of the more bizarre additions to the disc is Begley's Best in which Ed Begley Jr. talks about his range of cleaning products.

As it's a comedy there's the semi-obligatory Gag Reel which is quite funny - laughter is, after all, contagious. Finally, the Red Band Trailer shows the best bits from the film which all the expletives, drug use and sexual innuendos that are missing from normal trailer. 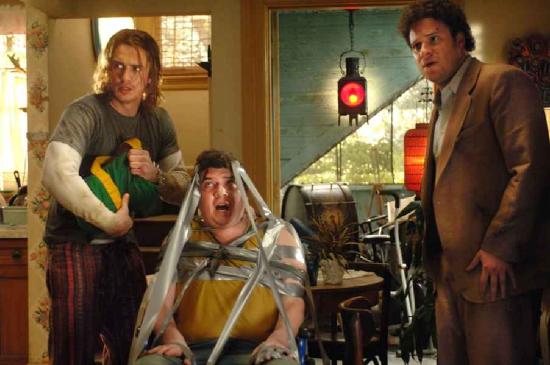 I'm no fan of Judd Apatow and his films with Seth Rogen, they strike me as immature, misogynist and puerile so wasn't expecting much from this. In addition, stoner movies really reached their pinnacle with Cheech and Chong's Up In Smoke and, though the Jay and Silent Bob characters in Kevin Smith's films are excellent, this has history against it. Furthermore, there's something about stoner films where they probably work better if you do a 'drinking' game whilst watching them, taking part in the fun and getting merry with the characters.

Pineapple Express follows in the same vein as the several films that preceded it from the Apatow stable, with Rogen playing a stoner loser who inexplicably has a hot girlfriend - fat losers don't get girls like that! In the commentary they explain that the film has an anti-pot message and shows Dale as a slacker who will get dumped by his girlfriend but it doesn't come across as an anti-pot film as Dale, Saul and Red all have a really exciting time with car chases, explosions and gunfights taking place and them not worrying like a normal person would, though a film where someone gets high and sits on the sofa for two hours watching television wouldn't make particularly good viewing so this can be excused.

The main problem with Pineapple Express is that it's not particularly funny and the action movie parody of the third act felt like sub-Hot Fuzz material; Edgar Wright and Simon Pegg as far more talented writers and performers than Apatow and Rogen and this section does feel tacked on rather than organic. If you've seen the trailers, the film is just that only padded out to nearly two hours - you don't need to see the full thing and it does tend to drag with such a long running time relative to the events depicted. I found the 'red band' trailer to be quite funny but when the laughs are so few and far between and you've already seen the best bits the film doesn't live up to the trailer, something The Onion pointed out so well with their treatment of Iron Man.

I enjoyed this more than Knocked Up or Superbad (which isn't hard as I hated that film) but found more to like in The 40 Year Old Virgin - maybe it's just a case of Apatow/Rogen fatigue setting in, where the same jokes and characters are being recycled film after film. Chances are that if you like Judd Apatow and Seth Rogen's brand of humour then you'll really like this and it's a very good disc with plenty of extra material (athough it becomes tiresome), though the lack of audio/subtitle options limits the wider audience.