Blu-ray
The Quick And The Dead

Blu-ray
Withnail And I 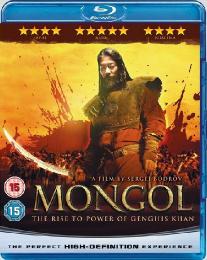 Directed by award-winning Russian film maker Sergei Bodrov, this epic opens with 9 year-old Temudgin (Odnvam Odsuren) and his father travelling through the immense, sprawling Mongolian steppe to find the young Temudgin a bride. Displaying an early iron will, Temudgin defies his father's wishes and chooses the spirited Borte (Mongolian actress Khulan Chuluun), who goes on to become his life long companion.

On their journey home, Temudgin's father is brutally murdered and Temudgin's own life put in grave danger; and so begins a brutal and nomadic existence with long periods of imprisonment and slavery for the young Genghis Khan.

As the film develops, we join Temudgin as he battles to unite the warring Mongol tribes and bring the first semblance of a recognised law and order to the vastness of the Steppe.

Complete with epic set-piece battles and bloody confrontation, this stunningly filmed feature takes its audience on a bewitching journey through the intricacies of Mongolian culture and custom and ultimately captures the humanity and compassion of a man traditionally written off as a war mongering and barbarous tyrant.