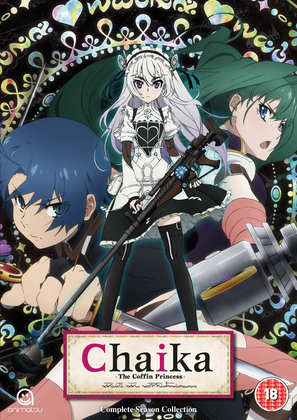 Why is it that the New Year always causes websites to fall over? From the mighty BBC to the humble MyReviewer... anyway, even if the review gets posted this week, I’ll still pretend that I actually reviewed two anime last week. The first was Chaika: The Coffin Princess as on the disc labels, or Coffin Princess Chaika as the e-tailer sites have listed it. The blurb may be a tad deceptive; it’s not a historical tale, but the actual show itself turned out to be quite the delight. It’s set in a fantasy world where magic has become technology, and where an odd girl travels the land searching for the dismembered body parts of her late father. Since he was the evil Emperor, this search is no small thing, and she has loyalists and a government agency after her. And she’s not the only one searching. Fortunately she finds an unlikely pair of siblings to help her. The characterisations maybe clichéd, but the story is really engrossing. Click on the review to read more. 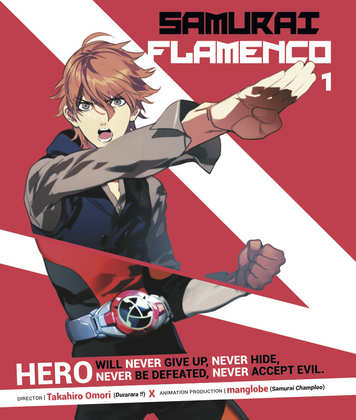 Next up, it was the turn of Samurai Flamenco: Part 1 Collector’s Edition. This certainly is a divisive show, Marmite in the truest sense of the word. It’s the tale of a male model turned vigilante, a wannabe superhero, and his rapid ascent from bumbling cosplayer with delusions of adequacy to genuine, all conquering Champion of Justice. It’s an intriguing premise, but the story twists and winds like an Amazonian tributary. See how I feel about this first half of Samurai Flamenco by clicking on the review, but be aware that we are the only English territory to get this show on home media. 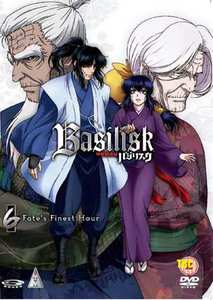 Basilisk. Ninja Scroll is a perennial favourite of anime fans, made evident by the recent success of its Blu-ray release. It’s the bloodthirsty action and the freakish excesses of ninja powers that draw in fans, which made the eventual Ninja Scroll TV series such a disappointment as it went all historical cyberpunk. Fortunately Basilisk stays true to that Ninja Scroll ethos of bloodthirsty battles and ninja freaks, and crosses it with a Romeo and Juliet storyline as well. Two clans of ninja, the Iga and Kouga have long been forbidden to battle each other (for fear of the collateral damage), despite their long standing grudge. But, there’s an attempt to reconcile through the young clan heirs, Oboro Iga and Gennosuke Kouga, who were betrothed in childhood. Fortunately for their betrothal, there’s genuine love there too. But then the former Shogun faces the trouble of both of his grandsons vying for the Shogunate. Rather than have his dynasty fall to infighting, he annuls the treaty between the Kouga and Iga, and orders a proxy war. Ten of the top ninja in each clan will battle to the death, and the surviving clan will signify who will inherit power in Japan.

I’m not a fan of bloodthirsty historical fantasies, and just like Berserk or Claymore, Basilisk is a show where I have to force myself to put a disc in and watch. But once I start watching, I’m hooked, as this is a great story, really told well, and benefitting from great production values. It’s one of those rare standout Gonzo productions that does something different from their usual output. Here’s my review of volume 6 from a few years back. The individual volumes will be hard, but not impossible to find now, especially second hand. Why would you want to, when MVM have the series collection readily, and inexpensively available? The discs also come with a host of extra features beyond what you normally get with anime. Funimation did release an upscaled version on Blu-ray but be aware that it is locked to Region A.