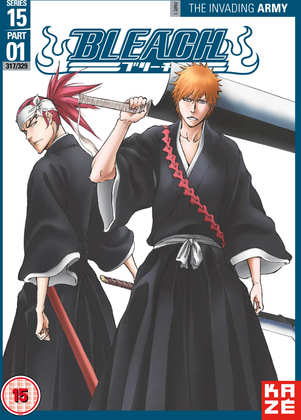 I’ve got this overwhelming sense of ennui washing over me like a tsunami of tedium, and I’ve been hard-pressed as to come up with a cause. Then I looked at the anime that I reviewed over the last seven days, and the answer clicks. First up was Bleach Series 15 Part 1, and the only interest I have left in this show is keeping track of how long is left before it ends. Just three more volumes if you’re wondering. What started off as a promising shonen action series about a teenage boy becoming a Soul Reaper eventually became... well you can read my past reviews for that whinge. This collection’s particular whinge is that we start another filler arc here. God! I only reviewed it seven days ago, and I can’t remember a thing about it. Click on the review to see what it was about, as I can’t help you here. Anyway, can’t find a trailer for this arc, so here’s a parody... 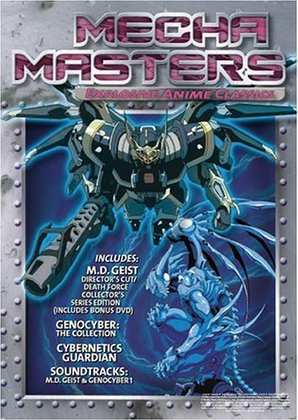 It gets worse. Especially as what came next wasn’t a review disc; I actually paid for this one. The Mecha Masters Collection from Central Park Media is a boxset that showcases the works of director Koichi Ohata. As I mention in the review, it’s the equivalent of a Uwe Boll boxset. If you like your violence extreme, gory, and splattery, set in a world of cyberpunk, then this collection is for you. It would have been perfect for the 17-year old me; indeed it was the prospect of finally owning the old Manga Video classic Genocyber on DVD that tempted me into buying this set. I’m not 17 anymore, and even then, Genocyber was the weakest of the anime splatter-fests that I owned. It’s the best thing in this set. Cybernetics Guardian is poor, and MD Geist is legendary for how bad it is. 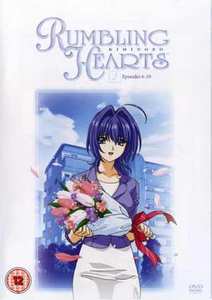 Rumbling Hearts. I used to think that Horror was my least favourite genre, then this week I was reminded of how much I shy away from soap opera, after reviewing Third Window Films release of the live action Be My Baby. I liked soap opera when it was big, glamorous, rich, and had J.R. Ewing or Alexis Colby in. These days, soaps are small, low rent, icky and well, Hollyoaks. Rumbling Hearts is a soap opera in anime form. In high school Haruka was sweet on Takayuki, so Haruka’s best friend Mitsuki put in some serious effort in getting close to Takayuki in order to set him up with Haruka, only Mitsuki went and fell in love with Takayuki as well. Takayuki and Haruka started going out, only for Haruka to get hit by a car and fall into a coma, with Takayuki guilting himself into messing up his life, dropping out of school. Mitsuki was the only one there to help him recover, and the two fell in love, even if they both lost their teenage dreams. Then three years later, Haruka wakes up out of her coma, only for her, no time has passed, and she thinks that she and Takayuki are still an item. And now the doctors want Takayuki to pretend that he’s still her boyfriend and it’s still three years ago, so as not to shock her back into a coma... Soapy or what!

Here’s a review for volume 2, and it’s another show that I had a first time appreciation for back then. There was the novelty of never having seen an animated soap opera before, and there is that perverse enjoyment of watching someone else’s relationship train wrecks. But let me put it this way... How often do you get out your old DVDs of Eastenders and watch an old story arc on repeat? Soap operas don’t stand up to the scrutiny of re-watching all that well. Still Rumbling Hearts has the novelty of a hospital doctor whose lower lip is always attached to a cigarette. Rumbling Hearts was released in the UK back in 2007 by Revelation Films during their brief experiment with anime. It’s a testament to how poorly the show did, given that you’ll still find stray volumes available via retailers for new, and second hand copies aren’t hard to come by either. But really, it is out of print at this time and will most likely stay that way. However, Funimation’s Region 1 release of the show is still in print on their S.A.V.E budget label, and you should be able to find a copy for around £10 or so if you’re in the mood for some soapy relationship angst.

Manga Entertaiment release Bleach Series 15 Part 1 on DVD, on behalf of Kazé Entertainment on the 25th of May. CPM’s Mecha Masters boxset is well and truly deleted and unavailable at this time, but why would you want one?