Now that wasn’t such a chore was it? Anime Limited has set a good month to raise the funds for their Kickstarter project, a US and UK home video release for the oddly neglected award-winning Mai Mai Miracle anime feature. It took less than 24 hours for them to raise the $30,000 for the subtitle only release on Blu-ray and DVD, and at the time of writing they are achingly close to making their first stretch goal of $60,000 to add an English dub to the release. They’re also just passed 1000 backers, which is where they’ve said that they’ll make the digital release of the film available to everyone who pledges more than $45, so you’ll get a digital copy even if you just opted for the Blu-ray. That’ll leave well over three weeks to add new stretch goals and that’s where the fans come in, as it’s at this point that you’ll get a say in what extra goodies you’ll see on the release. Anime Limited are already having speaks with the licensors to see if they can’t get more regions for it beyond UK/ROI and US/Canada.

Nearing their first stretch goal, Anime Limited have set out the options for their second $75,000 stretch goal and this time you get to choose between an audio commentary from anime-maestro Jonathan Clements, and a replica of the theatrical pamplet. Go to the kickstarter update page and make your preference known in the comments to vote.

Manga Entertainment posted their new podcast today with loads of news, info and good natured banter for fans to appreciate. One thing to note was some Sword Art Online news. They go into some of the details of the cover art complexity, and announce a reprint for Part 1 to get your sleeves matching, and a way for owners of the "Limited Collector's Exclusive" Wrong Cover Art edition of V1 to get a new sleeve when it becomes available.

Of more technical interest, and you may already be aware if you've read my review of Part 2, is the acknowledgement of faulty audio with the extra features on that disc. Manga Entertainment intend to remedy this with a fix on the second print run of that Blu-ray. Listen to the podcast for more details, but they suggest that you get a refund on the faulty disc if you are still able to (and if you wish to, as the audio on the episodes themselves is fine), and when the corrected discs become available, you can buy Part 2 then. If it's too late for you to return the disc, then Manga Entertainment will announce something closer to the time. Second print runs do take time, and are usually dependant on first run releases selling out, so patience would be your watchword in this case. 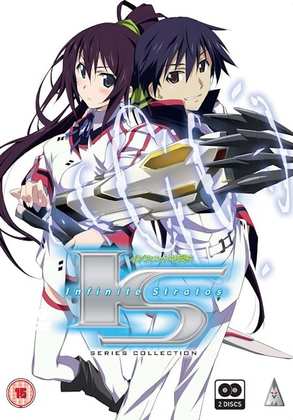 One anime review for you this week, that of Infinite Stratos: Complete Collection. Although complete is a misnomer given that they made a second season last year. There are more important, meaningful, and influential shows to pick nits about. Infinite Stratos is a harem comedy with sci-fi overtones, hardly a premise to get philosophical about. It’s another in a long line of shows with a wet, male lead, for whom all females fall inexplicably in love. The difference is that in this show, this all happens while they’re fighting in tournaments wearing powerful mechanical suits. Awkwardness occurs, boobs will be grabbed, and obnoxious haughty princesses will melt into warm puddles of romantic goo. You’ve seen it all before, and you can see it all again in Infinite Stratos, which has the benefit of being entertaining with all the clichés.

Infinite Stratos: Complete Collection comes out on DVD on the 17th of February, courtesy of MVM.