Vegan documentary Forks Over Knives turns up on DVD this January 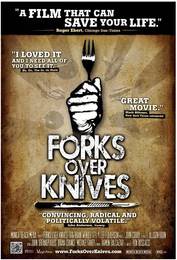 Well, Christmas is really definitely round the corner because we have now had an announcement of a post-xmas food documentary release. For those who don't know how these things work, basically in the run up to December we get a load of stand-up releases and something by Jeremy Clarkson, designed to take advantage of gift giving desperation.

Then, almost the moment that day of gluttony is over, all the workout videos and cure-all diet discs turn up, this one being the latter. Yes, Crystal Lake Entertainment have announced the release of Forks Over Knives on DVD this coming 14th January 2013.

We don't quite get the title, because this one is all about how eating meat and processed foods is bad for you, but surely a nice healthy baked potato needs a knife to eat as well? Anyway we digress...

Utilising state of the art 3D graphics and rare archive footage, the film features leading experts on health. The runtime is 90 minutes, and recommended retail price £16.99.

This documentary claims to investigate the growing issue of obesity and related health issues. Why is it that despite all the advances in medicine and healthy living, we getting bigger and sicker?

According to a study by Department of Epidemiology and Public Health at University College London in 2011, it was predicted that one in three adults in the UK would be obese by 2012. Being classed obese has many health implications attached to it including diabetes, cancer, stroke and heart conditions. All of this has led to an increase in health care and medical operations - simply put being over weight puts a strain on all systems biologically and financially.

But why is this happening? Could it be there’s a singlesolution to all of these problems? A solution so comprehensive, but so straightforward that it’s mind-boggling that more of us haven’t taken it seriously?

This documentary examines the profound claim that most, if not all, of the degenerative diseases that afflict us can be controlled or even reversed by rejecting our present menu of animal-based and processed foods.

In it Dr. T Colin Campbell a nutritional scientist at Cornell University and Dr. Caldwell Esseltyn a top surgeon and head of the Breast Cancer Task Force at the world-renowned Cleveland Clinic embark on separate but pioneering journeys.

Starting at their childhood farms where they both produced “nature’s perfect food” and then on to China and Cleveland, where they explored ideas that challenged the established thinking and shook their own core beliefs.

The idea of food as medicine is put to the test. Throughout the film, cameras follow “reality patients” who have chronic conditions from heart disease to diabetes. Doctors teach thesepatients how to adopt a whole-foods plant based diet as the primary approach to treat their ailments, while the challenges and triumphs of their journeys are revealed.