Places to Buy
The Lord of the Rings: The Return of the King
Not available

New: £8.99
Return to Sender
Not available

Star Wars: Return of the Jedi
Not available

Lord of the Rings: The Return of the King (Extended Edition)
Not available

The Return
Not available

New: £9.99
Lord of the Rings: The Fellowship of the Ring
Not available 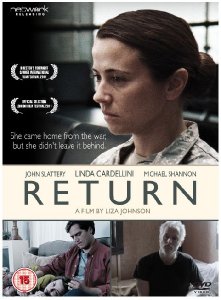 Fan of coming home dramas? Well Network Releasing have a release out on 6th August aimed at you. Return is written and directed by Liza Johnson, and stars Linda Cardellini, Michael Shannon and John Slattery.

Financed by the Sundance Laboratory, the film apparently premiered to high acclaim at the Cannes Film Festival 2011. With a recommended retail price of £14.99, the running time will be 94 minutes, and extras will include an interview with the director and lead actress, and a trailer.

The synopsis is as follows:

Leaving the war behind, Kelli (Cardellini) can't wait to re-join her old life in the rust Belt town she's always known. She is ready to experience the old feelings of everyday life again, to enjoy the most mundane smells and touches that everyone safely at home knows well.

But slowly, the realisation dawns on her that what was once so familiar is now alien and disconnected and trifle. Her friends, children and husband need more focused attention than she can give. Try though he might, her husband Mike (Shannon) does not understand what she has been through.

As dislocation ripples through her world, Kelli risks becoming an outsider; thrown back on her own resources, she must now try and find a new way forward.