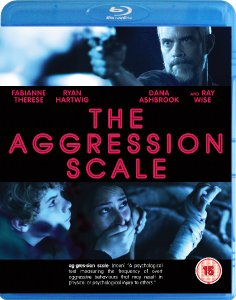 Another release from Anchor Bay to bring you news of, this time thriller The Aggression Scale, out on both DVD and Blu-ray this 3rd September.

Directed by Steven C. Miller who is responsible, if that is the right word, for Scream of the Banshee and Zombie Transfusion, it was written by Ben Powell and stars Ryan Hartwig, Fabianne Therese, Derek Mears, and Twins Peaks stars Ray Wise and Dana Ashbrook.

No extras listed, the running time will be 82 minutes, certificate is 15, and the street price should be around £11.99 for the standard definition, and £13.99 for the high def version.

Released from prison on bail for 48 hours after being charged with murder, ruthless crime boss Reg Bellavance is planning on avoiding a life behind bars by skipping the country with his young son. But first he needs to lay his hands on the illegally gained stash of cash he had put aside to fund his departure.

Bellavance places the task of finding the money in the hands of hitman Lloyd and his accomplices, instructing them to hunt down and kill anybody who could possibly have been involved in the money's disappearance. Their bloody trail of murder and destruction eventually leads to the new home of Bill and Maggie Rutledge and their kids, Lauren and Owen.

On paper, this particular hit should be the easiest and most rewarding of the lot. What Lloyd and his goons don't know - but are soon to find out - is emotionally disturbed Owen has a secret history of violent behaviour that makes their exploits look like child's play in comparison.