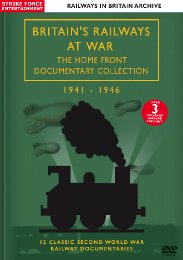 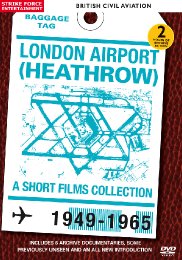 Article
Family blood sucking fun with My Babysitter's A Vampire: The Movie on DVD this June

Vintage footage releases from Strike Force on DVD in June 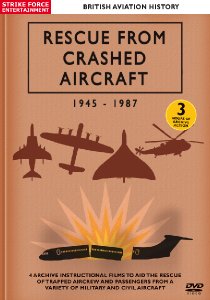 News of three titles for nostalga, aircraft and choo-choo fans today, all from Strike Force Entertainment and each coming to DVD on 25th June.

First up we have Rescue From Crashed Aircraft 1945-1987, a collection of four previously unreleased official British training films stretching from the Second World War to the late 1980s.

These were designed to educate the viewer of the best ways of trying to save people trapped inside military and civilian aircraft in the vital minutes after an air crash. The retail price will be £19.99 for this one.

All four films were made for emergency service personnel and were never intended to be seen by the public. The first film, dating from 1945, reveals how to rescue pilots and crew from a downed Lancaster bomber, the mainstay of RAF Bomber Command at the time. Lancaster losses were frequent, and knowing how to quickly extricate crew from a wreck would have made all the difference between life and death on numerous airfields across wartime England. Tackling a wrecked RAF Anson is also included.

The second film, from 1957, reveals no less than twelve different rescue procedures for different classic RAF and RN aircraft of the era. They include everything from the Canberra, Javelin, Hunter and Meteor to giant V-bombers like the Avro Vulcan and Vickers Valiant. Made in 1970, the third film also looks at improved rescue procedures for downed V-Bombers including the Vulcan and the Valiant, as well as fighters like the Lightning Interceptor, Phantom and Harrier and big transports from the Andover and Hercules to the VC10 and Belfast.

The fourth and final film, from 1987, covers no less than emergency rescue procedures for twenty different aircraft including for the first time a wide variety of service helicopters and small executive jets. New service aircraft covered include the Nimrod, Jaguar, Tornado, F-111 and the Hawk trainer as well as the Tristar. Three hours long, this totally unique DVD provides a fascinating insight into military air crash procedures and includes much precious footage of classic British aircraft types. 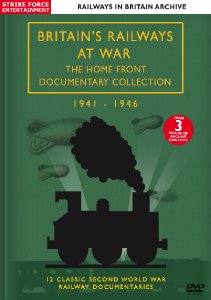 Next up we have Britain's Railways at War: The Home Front Documentary Collection 1941-1946, also carrying a recommended retail price of £19.99.

The films, all made during or immediately after the war, capture a wide variety of services and activities on the railways across Britain. From following the newspaper trains out of London to a look at troop trains, evacuee services and munitions freight, and from women at work as emergency drivers on the GWR and the SR to the firing of rail mounted 'Boche Buster' big guns, the DVD provides an invaluable historic record of Britain's railways at war.

With almost three and a half hours of rare and previously unavailable footage, this new collection includes behind-the-scenes footage of the railway's role in famous military engagements including Dunkirk and D-Day. It also includes perhaps the best-known and celebrated railway film of the entire war, Shunter Black's Night Off, in which a loco driver heroically tackles the immense danger of an incendiary bomb landing on a fully loaded ammunition goods truck by means of deftly and hastily executed switchback shunt across the yard to the water tower. 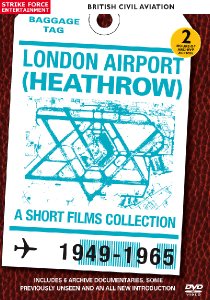 Finally, for a lower £16.99, is London Airport (Heathrow): A Short Films Collection 1949-1965. This contains two hours of rare short films collected together for the very first time, and is described as the most comprehensive DVD film portrait of the world's greatest airport ever produced.

The seven films featured - some of which have never been made available before - concentrate on Heathrow's international air operations during the era of BEA and BOAC, two of Britain's most iconic airlines. The first film featured, London Airport, looks at the building of the airport between 1944 and 1949, while London Airport Aircraft Recognition combines rare footage with fascinating details to profile the aircraft using the airport during its first year of operation.

These include Constellations, Stratocruisers and the Convair 240. Also made in 1949, Wings Over The World provides almost 40 minutes of rare footage of aircraft servicing the airport in its earliest days. Two films from the 1950s provide a unique, behind-the scenes look at Heathrow's systems in action.

In On The Beam looks at the airport's air and ground approach systems, while Air Crossroads- London reveals how the airport copes with its ever-increasing passenger and freight traffic. Remaining behind-the-scenes, filmmakers secured privileged access to Heathrow in 1965 to film a totally unique 'day in the life' record of the airport in Airport. Almost 40 minutes long, Airport ranks amongst the finest British aviation documentaries ever made.