Top US drama Breaking Bad: Season 3 comes to DVD in May 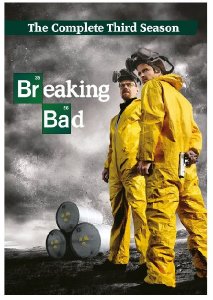 Breaking Bad: The Complete Third Season DVD will be available for £29.99.

Created by writer/director/producer Vince Gilligan (TV's "The X-Files"), who also serves as executive producer with Academy Award® winner Mark Johnson (Rain Man, 1988 Best Picture), Breaking Bad follows the story of Walter White (Cranston), a high school chemistry teacher who discovers he is dying of lung cancer. Desperate to pay for his cancer treatments and to secure his family's financial security, Walt discovers a new sense of fearlessness. He teams with former student, now drug dealer Jesse Pinkman (Paul) to use his scientific knowledge for financial gain, but soon finds he's trapped in a sinister world of drugs and crime.

SYNOPSIS:
Winner of two 2010 Emmy Awards, including Outstanding Lead Actor in a Drama Series for Bryan Cranston and Outstanding Supporting Actor in a Drama Series for Aaron Paul, Breaking Bad: The Complete Third Season returns, hailed by the Los Angeles Times as "the best show on television." Even though his cancer's in remission, chemistry teacher-turned-meth maker Walter White (Cranston) still can't catch a break. His wife (Anna Gunn) has filed for divorce, his DEA agent brother-in-law (Dean Norris) is out to bust him and a Mexican cartel just wants him dead. But with his family's future still at stake Walt cooks up a deal that will make him a fortune; a scheme with a terrible price.