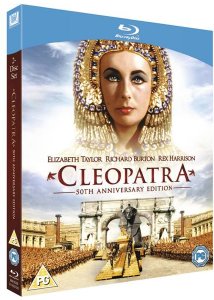 This Blu-ray release has many brand new special featurettes including Cleopatra through the ages, The Cleopatra Papers - A Private Correspondence, Cleopatra the film that changed Hollywood, plus Fox Legacy

Synopsis
Elizabeth Taylor, Richard Burton and Rex Harrison star in this sweeping tale of power and betrayal - the legendary story of the Queen of the Nile and her conquest of Julius Caesar and Marc Antony. Here is the truly unforgettable portrayal of the beguiling beauty who seduced two of Rome's greatest soldiers and changed the course of history. Cleopatra is visually breathtaking in scope and grandeur, the film won Oscars for Cinematography, Art Direction, Costumes and Special Effects. In the Twentieth Century Fox tradition of epic romantic adventures like The Vikings, Braveheart and Titanic comes the greatest spectacle of all.. Cleopatra

Director Joseph L Mankiewicz classic epic Cleopatra looks and sounds better than ever, the newly digitally restored 50th Anniversary edition has to be seen to be believed on Blu-ray available from 30th January 2012.

CLEOPATRA is distributed by Twentieth Century Fox Home Entertainment and is available from all good Blu-ray stockists from 30th January 2012.