DVD
The Night is Young

Article
The Human Centipede 2: Full Sequence gets a Blu-ray and DVD release in the UK this November

Three Colours trilogy out on Blu-ray this November 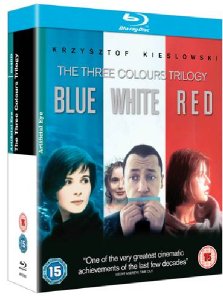 Available for the first time in the UK on Blu-ray, Krzysztof Kieslowski's multi award-winning trilogy is a landmark of world cinema.

Three Colours: Blue, White and Red have been acclaimed as masterpieces by critics and audiences the world over. The films, co-written by Kieslowski and Krzysztof Piesiewicz, with whom he wrote the epic Dekalog cycle, explore the French Revolutionary ideals of freedom, equality and brotherhood and their relevance to the contemporary world.

Blue examines liberation through the eyes of a woman (Juliette Binoche) who loses her husband and son in an auto accident, and solemnly starts anew.

White is an ironic comedy about a befuddled Polish husband (Zbigniew Zamachowski) who takes an odd path of revenge against his ex-wife (Julie Delpy). A Swiss model (Irène Jacob) strikes up a friendship with a retired judge (Jean-Louis Trintignant) who eavesdrops on his neighbours in Red.

The trilogy is a snapshot of European life at a time of reconstruction after the Cold War, reflected through Kieslowski's moralist view of human nature and illumined by each title's palate colour.