Family comedy Zookeeper flocks to Blu-ray and DVD this November 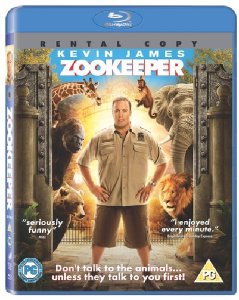 The bonus features on the DVD include a blooper reel and multiple behind-the-scenes featurettes, including "Creating the Visual Effects," which shows how filmmakers created talking animals. The Blu-ray Disc™ contains everything included on the DVD, plus additional featurettes, including "The Cast of Zookeeper," a look at some of the star voices in the film, including Judd Apatow, Jim Breuer, Jon Favreau, Faison Love and Maya Rudolph, as well as movieIQ+sync.

Also included on the Blu-ray and is a playable PlayStation®3 game demo of the highly anticipated RATCHET & CLANK: ALL 4 ONE™, the latest installment in the family-friendly Ratchet & Clank® video game franchise, coming on October 21from Insomniac Games and Sony Computer Entertainment. With this game demo, Blu-ray fans around the world can sample levels from this exciting adventure.

The demo encompasses two different sprawling and vibrant high definition environments. This newest adventure introduces two-to-four player cooperative gameplay, allowing players to experience this compelling quest alone in single-player or in multi-player mode. For the first time in series history, you can play alone or with up to three other friends as Ratchet, Clank, Captain Qwark, or Dr. Nefarious!

Synopsis:In Zookeeper, the animals at the Franklin Park Zoo love their kindhearted caretaker, Griffin Keyes (Kevin James). Finding himself more comfortable with a lion than a lady, Griffin decides the only way to get a girl in his life is to leave the zoo and find a more glamorous job. The animals, in a panic, decide to break their time-honoured code of silence and reveal their biggest secret: they can talk! To keep Griffin from leaving, they decide to teach him the rules of courtship - animal style.

Pricing and bonus features on Digital editions of Zookeeper may vary by service provider.