DVD
Bleach The Movie: Memories Of Nobody

…Is the tag line for a detergent commercial. The reverse is one of the most striking anime series around from the inimitable Studio Bones. Last week Manga Entertainment confirmed via Twitter that Darker Than Black Series 2 will get a DVD and Blu-ray release on the 26th of December 2011. They also mentioned that the Blu-rays at least would be the same discs as the US Funimation release, which indicates that the all-important Gaiden OVA episodes will be there alongside the second series.

Also tweeted were some tantalising hints about something big coming with DtB S2 on Boxing Day. It's not the Trigun movie that I was hoping for, as the contract for that is still being finalised, according to a forum post by Kaze on Anime UK News. Judging by previous post Christmas releases from Manga Entertainment, it will most likely be either the 2nd Naruto Shippuden movie, or the 3rd Bleach movie. 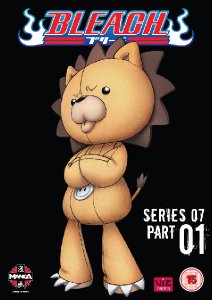 It's been a couple of weeks since my last review round up, a couple of weeks away from anime, and indulging in the nostalgic pleasures of Tales of the Gold Monkey, and the somewhat more dubious pleasures of Erotibot. But it's time to put the nose next to the wheel, the shoulder to the grindstone, and to kick off a glut of October anime, I deliver the last of September's, Bleach Season 7 Part 1. There was a time when the schedules were packed with shonen anime, nary a month went by without a Bleach or Naruto release, but somewhere back in the supply chain, someone's put the brakes on. I guess everyone is feeling the pinch, and not everyone can plonk down the cash for 13 episodes on a monthly basis. Those 13 episode collections also seem to be a thing of the past, as Season 7 Part 1of Bleach has only 10 episodes to it. This would all happen when Bleach finally started getting good again. See how good by reading my review. 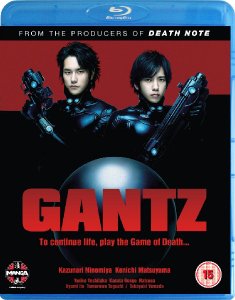 Ok, so not all that much anime to report on. My first October review, and my second review of the week is Gantz: The Movie on Blu-ray. It's the recent live action adaptation of the Hiroku Oya manga, but those with longer memories will also recall that it spun off a 26 episode anime series made by Gonzo Digimation, released in the UK by MVM. The story is simple, the recently deceased are resurrected by an enigmatic black ball, supplied with fantastic ability enhancing suits and futuristic weaponry, and set forth to do battle with aliens in night time Tokyo, in a game where the object is to stay alive. The manga was edgy, with sex, violence, and plenty of social comment. The anime had to conform to Japanese broadcast standards, and toned down the sex. The movie is a summer blockbuster made for general audiences. It sounds like the transition from The Terminator to Terminator 3. Click on the review to see if that actually is the case.