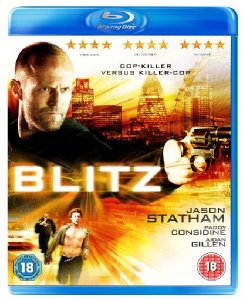 Action super-star JASON STATHAM (The Expendables, The Mechanic) is an unconventional cop on the trail of a cop-killer in the explosive BLITZ. On DVD and Blu-ray from 26th September.

STATHAM heads up a British all star cast, including PADDY CONSIDINE (The Bourne Ultimatum, Submarine), AIDAN GILLEN (TV's The Wire and Game of Thrones) and DAVID MORRISSEY (TV's Red Riding) in this uncompromising thriller set on the streets of London and based on the book by acclaimed crime writer Ken Bruen.

Detective Tom Brant (Statham) is a tough un-PC cop on a mission to take down a serial killer who has been targeting London policemen. Nicknamed 'The Blitz' the vicious psychopath is picking off officers from a burnt out division and Brant - partnered with an unlikely accomplice in Considine's Sgt Porter Nash - is the only cop left on the block mean enough to take him out.