DVD
Far and Away (US) 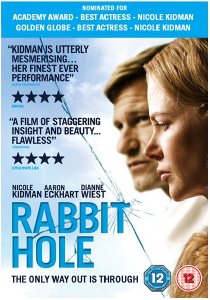 "Aaron Eckhart and Nicole Kidman burn up the screen…Glorious" - Esquire

Nominated for a Golden Globe and an Academy Award, RABBIT HOLE is a searingly powerful emotional tour de force, featuring a career-defining performance by Nicole Kidman.

Rabbit Hole tells the story of Becca and Howie Corbett, a married couple struggling to return to their everyday existence several months after the loss of their child. With their world tilted off of its axis, Becca and Howie embark on separate journeys, making increasingly unexpected choices that threaten to pull them apart. But as a series of events unfold that offer to bring new meaning into their lives, the couple must decide whether to allow their personal journeys to bring them back together.

Vivid, honest and frequently funny, RABBIT HOLE is a stunning portrait of a family searching for what can remain possible in the most impossible of situations.

EXTRA FEATURES
Cast and crew interviews
Behind the scenes featurettes