Last year I mentioned that Navarre was looking for a buyer for Funimation, currently the biggest anime fish in the US pond, for the corporate reason of creative differences. The new owners are an investment group who will retain Navarre for several services, not least of which is distribution. Usually the words 'Investment Group' provoke a vision of a corporate dissection and profit grab, but this time the group is headed by none other than Gen Fukanaga, CEO of Funimation, so the company is effectively still in the same, safe hands that it was before Navarre acquired it in the first place. Mania for the news.

Last week was the big news that the UK finally had a streaming service for anime of its own, and we also got the first episode of their new acquisition, Tiger and Bunny. Anime on Demand also announced the older Majin Tantei Nogami Neuro series. This week has seen their schedules fleshed out somewhat with the reveal that they will also be simulcasting the sci-fi Stein's Gate, the slice of life comedy Nichijou, and the post apocalyptic Deadman Wonderland.

All three are series that Crunchyroll have also announced, but unlike Stein's Gate, which Crunchyroll have geolocked from the UK, Nichijou and Deadman Wonderland will also be available to UK viewers via Crunchyroll. The redundancy is a little disappointing, especially given AoD's subscription model, contrasted with Crunchyoll's free SD streams. Anime on Demand still have one series left to announce though. UK Anime.Net for the news. 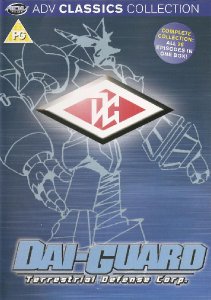 I got one anime review posted last week, but since it is a complete series review, I feel that I have done my fair share of reviewing and more, especially as Dai-Guard: The Complete Collection is an example of my least favourite anime genre, the giant robot. It cribs from the best though, Evangelion, with an all powerful alien of the week regularly appearing to wreak havoc on the world, and only the giant robot Dai Guard able to stand up to it. The twist is that this robot isn't operated by the military. Due to paperwork, contracts, and utter bureaucracy, Dai Guard remains in the charge of the PR department of a security company. This time it is the office workers who will save us all, as long as they remember to submit their reports on time, in triplicate. Even better, the main pilot of the Dai Guard isn't a whiny teen.
Dai-Guard: The Complete Collection was released by ADV back in the day, and was one of the first series to get a repackaging as the company was circling the plughole. As a result, Dai-Guard is getting pretty hard to find now. I normally don't endorse any particular e-tailer at this point, but if you click the Anime on Line link, you'll still be able to find it there at a ridiculously agreeable price point for a six-disc collection.