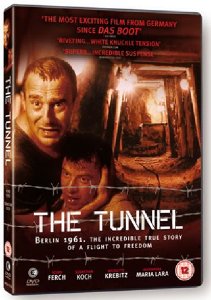 'The most exciting film from Germany since Das Boot'
LA Times

Roland Suso Richter's multi-award winning drama The Tunnel has been described as the most exciting German film since Das Boot and now it comes to DVD for the first time from Second Sight.

Based on a fascinating true story that takes place in the divided Berlin in 1961, the film stars Heino Ferch (Downfall) and Sebastian Koch (Black Book, The Lives Of Others).

During the 28 years that the Berlin Wall stood, countless tunnels were planned as escape passageways from East to West. The Tunnel recounts the harrowing tale of the development of the most famous one and will be released on DVD on 25 April 2011.

East German swimming champion Harry Melchior (Ferch) flees to the West to escape the communist regime just before the borders are sealed, but his sister is not so lucky and he is determined to free her. Joined by others also desperate to free their loved ones, they have an audacious plan; to tunnel beneath the wall and the 'death strip' partrolled by border guards. But not everyone can be trusted and they are soon digging for their lives in a nerve-racking race against time.

The Tunnel is a riveting and harrowing tale about the courage and tenacity of a group of heroes driven by the love of their families and the need for freedom that grips to the very end.