Series 9 of Spooks burts onto DVD in February 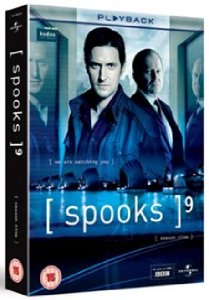 "Who doesn't feel a thrill of excitement when a new series of Spooks hits our screens?"
Daily Mail

BAFTA Award-winning British television spy drama Spooks is back for its ninth knuckle-clenching series and is available on DVD from 28th February 2011 courtesy of Universal Playback. Filled with spy-tastic extra features, the DVD is a must for any die-hard Spooks fan.

The ninth series of the critically acclaimed Spooks, is filled with dramatic revelations and a host of new characters - Sophia Myles (Underworld, Doctor Who), Max Brown (Mistresses, The Tudors), Iain Glen (The Blue Room, Lara Croft: Tomb Raider), Simon Russell Beale (Much Ado About Nothing, Uncle Vanya) and Laila Rouass (Primeval, Footballers' Wives). Friendships will be tested and the depth of deceit will lead to an unprecedented game of cat and mouse and the impact this has on the team dynamic will have viewers enthralled.

Follow the team on a whirlwind adventure tracking Somalian terrorists, preventing assassination attempts, avoiding bomb efforts and vicious snipers, and through it all face the personal consequences of working for the MI5.

The complete Spooks: Series 9 DVD boxset contains never before seen extras such as a feature on The Cost of Being a Spy and a look at The Downfall of Lucas North. Episode commentaries with the cast and crew will also reveal secrets that have so far remained strictly confidential.

Are you ready to sacrifice it all and embark on the nail-biting adventures with the Spooks?