CD
In The Blue Light

Railways of The World: The 1960's arrives on DVD in February 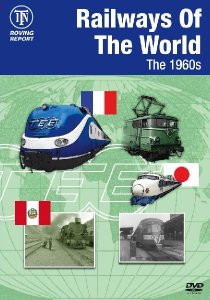 In the late 1950s and early 1960s, ITN filmed a series of news items abroad called 'Roving Report'; most have never been seen since their initial broadcast. The period covered by this DVD was a time of intense transition for railways the world over. From in-depth studies of rail systems in Europe to unique and unusual services around the globe - this is ITN ROVING REPORT : RAILWAYS OF THE WORLD : The 1960's

SYNOPSIS
Other People's Railways (1963, 13 mins)
With the Beeching Report, Britain was faced with the question of modernisation and rationalisation of its extensive railway network. Roving Report made a comparative analysis of how different countries rail networks coped with the changes in technology and in demand for their services. In France, we board the Mistral Express and, in Japan, the 'Dream Train'. An in depth look at Holland, where over two-thirds of its stations were shut, concludes the overview.

French Railways (1968, 18 mins)
An in depth study of the French Railways, following the journey of the fastest electric train of the day, Le Mistral, on its journey from Paris to Dijon. With interviews with staff and English passengers, we are treated to a fascinating comparison with British Rail.

The Tyrol - With a Twist (1963, 13 mins)
Michael Barlsey journeys from Victoria Station to the Austrian ski slopes via the unusual and quirky "Snow Sing" train service. With loud music piped into the compartments and a dance carriage where passengers "do the twist" on board all day and night, this is a trip not to be forgotten!

Railway To The Moon (1961, 15 mins)
A fascinating study of the astonishing railway in Peru that climbs the Andes mountains, built in the late 19th Century. At its peak the railway is 3.5 miles above sea level, leading to a doctor on board having to give oxygen to its passengers. With amazing scenery from Lima and the mountains, we follow the whole extraordinary journey.

BONUS FEATURES
Mount Carmel By Underground - An Excerpt (1960, 3 mins)
A look at a trip on the only underground service in the Middle East, travelling up and down Mount Carmel.

Day Trip To Dieppe - An Excerpt (1960, 8 mins)
A wide range of characters take a day trip to France starting with a cup of tea and ending, more often than not, fast asleep on the return journey!

Easter Excursions (1961, 15 mins)
A look at the various options for an Easter trip to the continent, ranging from boats and trains to the rather unusual practice of flying your car over on an 'airbridge' chartered flight!

Journey Through Malaya - An Excerpt (1961, 4 mins)
Footage of the construction of a new rail system to help transport goods from mining operations in very difficult conditions in Malaya.

Whisky Train (1964, 4 mins)
A report from the Scottish Highlands following the transport of whisky barrels by train to the bottling plants. Such trains had become increasingly vulnerable to theft!

Railways of the World The 1960's is distributed by Strike Force Entertainment / Cherry Red Records and is available the website below from 28th February 2011.