Blu-ray
Is the Order a Rabbit? - Season 1
Related Articles

Hayate The Combat Butler, Now Free And Legal To The UK!

Last year, Crunchyroll streamed Hayate The Combat Butler Season 2 to the world, and given I couldn't easily find Season 1 to watch legally, turned out to be remarkably enjoyable even with the absence of back story. So much so that I've been looking forward to a Season 1 release ever since. There isn't one in the UK, but Bandai have the rights to distribute the DVDs in the US, at something of a premium as well. Finally, a few months ago, Crunchyroll started streaming a few Bandai licences, and top of the list was Hayate Season 1. But it was only this past week that they broadened the licence to include non-Region 1 territories. We can finally watch it in the UK! For those of you yet to experience its delights, it's a peach of a comedy show about a young man in debt who becomes butler to a rich heiress, and it's absurd, ridiculous, constantly breaks the fourth wall, and rich with pop culture references. Click on the link adjacent, scroll down to the Season 1 episode list, and away you go!

At the time of writing, only the first 40 episodes had been posted though.

They said that they would have announcements on the auspicious 10/10/10 day, and they delivered.

Summer 2011 will see the UK release of the zombie anime, High School of the Dead. Manga will be working with Sentai Filmworks to prepare a Blu-ray release as well.

While late spring 2011 will see the release of Casshern Sins to the UK market, only recently released in the US by Funimation. No word as yet as to whether there will be a Blu-ray release of that.

Further announcements will be due at the Anime Expo at the end of the month. 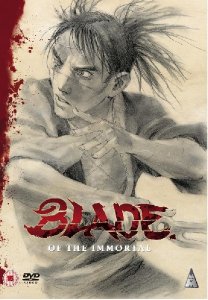 The first review of the week was the debut of the new action series from MVM, Blade of the Immortal: Volume 1. A mass murdering Samurai named Manji gets cursed for his crimes by being made immortal. His body is full of worms that stitch him back together after he's sliced apart. Tiring of the immortal life, and feeling the guilt of his crimes, Manji learns that if he can kill 1000 evil men and redeem himself, he'll be allowed to die. Rin is a girl who is looking to avenge her murdered parents, and going after the men responsible will take a good chunk out of that 1000 target. Ok, it's not the deepest storyline ever, but the visuals are very effective, and it's directed with style and verve. If you want to know if that's enough to make up for the thin story, you'll have to click on the review. 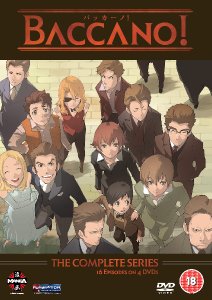 Next up was the review of Baccano! The Complete Series. I got previous with the series when I first encountered it a couple of years ago, and imported it before the phosphor faded on my monitor, when the e-tailer updated its product listings. That means that it has fallen to David Beckett to take a look at the UK release of the show. It's a peach of a story as well, set during the Prohibition Era, following three events across three years, linking as disparate a set of characters as you can imagine, told in a brilliantly fractured narrative that will have you hooked on every frame. But don't take my word for it. Click the link, and see what David has to say.
MVM had Blade of the Immortal: Volume 1 scheduled for the 4th of October, but Play and HMV have the date pushed back to the 18th, so your guess is as good as mine. Manga Entertainment are definite about the fact that Baccano! comes out today. And you really oughtn't let it linger on the shop shelf any longer than it absolutely needs to.